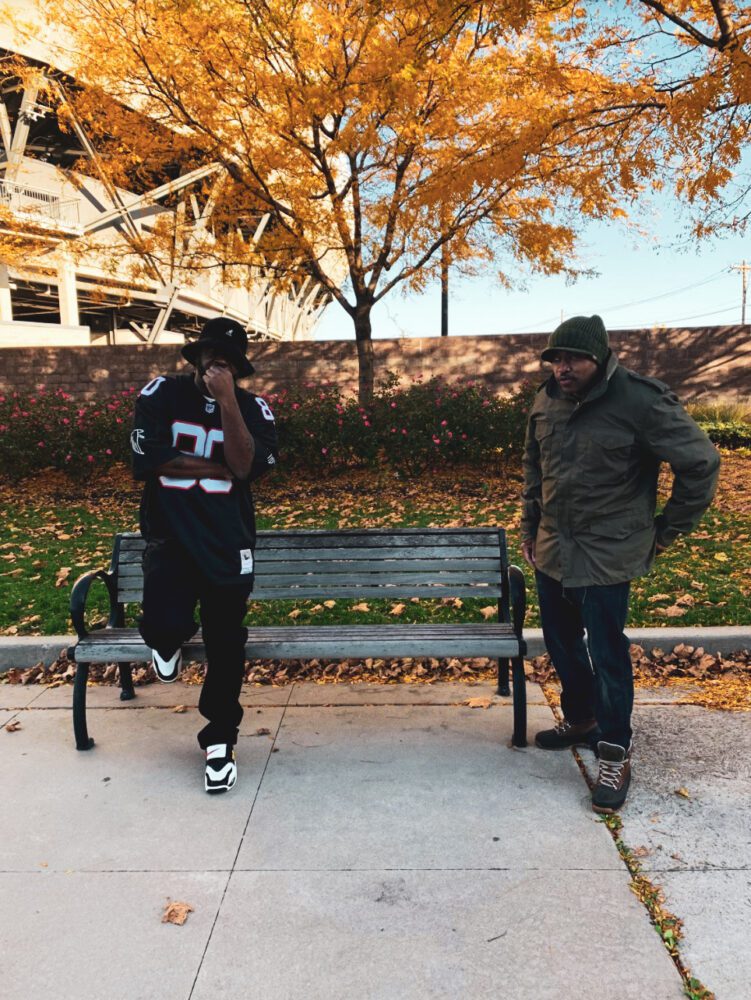 Newark, New Jersey MCs The Org recently released the music video for “Peace,” a low-slung banger about finding peace in today’s world, a track from their album, Still A Long Way to Go.

Inspired by their relationship with God, The Org’s duo of B-Down and 360 narrate the fight for just surviving with a modicum of dignity. And they do it with style and hard-hitting rhymes, including verses from the Bible, prayers, and references to the Book of Philippians. Yet at the same time, their lyrics echo the rough reality of the streets.

The video, directed by Marcus Hall, depicts B-Down sleeping on the floor of Penn Station. Awakened by a police officer, he moves on, walking outside where images show him washing car windows and diving through trash cans to make ends meet. Crossing the river, he hooks up with 360 outside the Red Bull soccer stadium, where the two deliver smart rhymes chock-full of spiritual truths.

“Peace of mind no drama just balance / You’ll be tested accept god’s challenge / Drop down to my knees and kept my eyes closed / On the 3rd day delivered when my God rose / Bare my soul stay composed when I write this / I want to be like Christ and his likeness / Eternality is what I want just to say the least / Heaven bound, god-like all I want is Peace.”

Muzique Magazine caught up with The Org to find out how they got started in the rap game, their songwriting process, their influences, and the significance of their name – The Org.

How did you both get started in music? What’s the backstory there?

360 – I had a love for rapping after hearing oldies like the Message & The Sugar Hill Gang, then one day, my uncle came home from school with the skill of M.C.’ing. The rest is history, I was hooked.  B Down- It was a guy that use to hook up his turntables and mix records all day. Guys would rhyme and breakdance and once I saw that I knew it was something I had to be a part of.

What’s the story behind the name The Org?

Has your sound evolved over the years? How do you keep your sound fresh?

360 – Unsure about this one, because we have NOT changed our flow or style much, but it’s definitely a relevant sound that can stand up to anything that’s made today.

B-Down – I think us doing what comes naturally to us has made us different in a sense. You don’t see many groups really embody the elements of true classic hip hop.

360 – For me, it happens in this order: I hear a musical track that inspires me, then next comes the flow (from lots of mumbling and cadence forming), then come the lyrics using pen, pad, and Bible.

B-Down – The music always influences me first. Melodies tell a story, and it helps me capture the element of what a song is supposed to be. Also, life experience and other talented MCs really motivate me.

What was the inspiration for your new single/music video “Peace?”

360 – This is definitely a time when the world can use lots of Peace. B-Down came with the track from one of the Top producers we’re working with, and the rest was history.

B-Down – Rashad Coes told me he had a specific track with us in mind. When he presented the track, I was so impressed that I wrote my verse in 30 minutes. Sometimes, it takes days and in other scenarios, it can come that fast.

360 – No matter the situation, you will ALWAYS find Peace with God.

B-Down – God comes first and we all need peace in this current state of the world.

360 – Really tough not doing your normal routine, but the family time has been priceless.

B-Down – I just look at it like God is trying to slow us down and teach us something. It’s tough but it’s always valuable to learn lessons in tough situations.

Looking ahead, what’s next for The Org?

360 – Managing some upcoming artists that The Org has their eyes on!

B-Down – We have a few more videos coming off this album. It’s called Still A Long Way to Go. We will go hard with promoting that and then we are going to start working on another project with all the artists that we want to bring out. Basically, keep the ball and the momentum going.