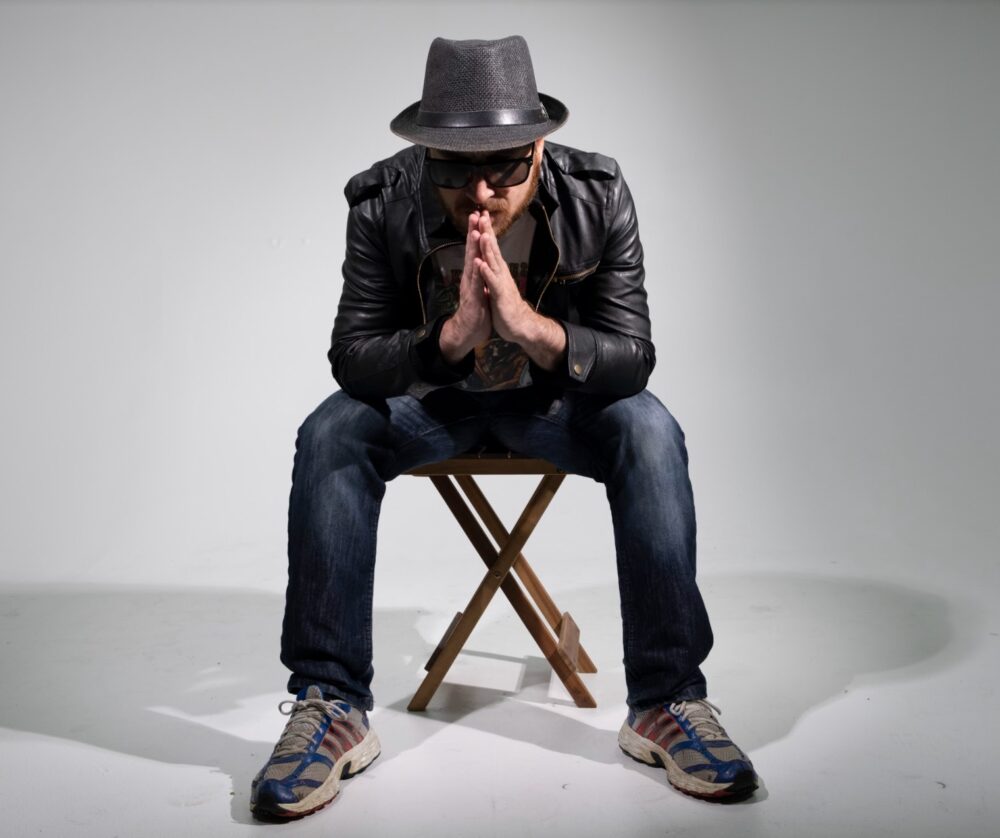 Originally from El Salvador, when he came to the U.S. pop-rock guitarist/singer-songwriter Daglio adopted Cincinnati, Ohio as his city. His latest music video, “La Puerta Oculta,” was released last month and is the title track from his forthcoming EP.

Sung en Español, “La Puerta Oculta” reflects his work with the rock groups Ultravioleta and Smoke & Mirrors yet includes references to the potent Latin American pop-rock of the ‘80s and ‘90s, as well as doses of his own unique sound.

An ardent fan of both sci-fi and comic books, Daglio’s impending EP will be complemented by a graphic novel, enhancing and amplifying the sci-fi motifs of the songs.

The video depicts Daglio as the janitor at a state-of-the-art laboratory, where his curiosity about the strange and wonderful apparatuses in the lab is inexhaustible. One day, the scientist in charge of the lab falls, leaving Daglio to tend the machinery. Before passing out, the scientist attaches a control device to Daglio’s arm. Playing with the device, Daglio inadvertently opens a door into another dimension. Daglio steps through the doorway … and as he says in the interview, “To be continued.”

Muzique Magazine sat down with Daglio to delve into his writing process, the inspiration for “La Puerta Oculta,” and how he got started in music.

I was 13 years old when my uncle Manuel taught me the intro to “Stairway to Heaven” on an acoustic guitar. Playing guitar really came as second nature to me. I come from a line of musicians in my family and decided early on this is what I wanted to do, just bigger and better! I was always heavily influenced by both American/English Rock music and Rock en Español mostly from South America. I have since then gigged in Europe, the USA, and toured central America.

Jorge Drexler. The guy is a real poet with his lyrics and an amazing composer!

“La Puerta Oculta” is musically inspired by the music that I grew up listening to. It’s kind of a love letter to the Rock en Español that was popular in the ‘80s and ‘90s. You will hear influences of Soda Stereo, La Ley, Enanitos Verdes, and Los Prisioneros. I’m also a big sci-fi fan so there’s this underlying retro ‘80s feel to everything I do. There is an actual storyline within the song, but more on that later! Mainly, I want to celebrate this aspect in Latin American musical history that seems to have been lost in recent years.

The video is the beginning of an actual storyline that we will soon be continuing in other media like Graphic Novels, webisodes, and more music videos. I want people to accompany us on the journey through “La Puerta Oculta” (The Hidden Door) into an intergalactic musical adventure! Daglio is the main character and he is also a fictionalized version of me. He meets “The Professor” at a top-secret lab where the adventure begins.

The video was directed by Nuge and was filmed at BCS Technologies and at his Green screen studio.

Oh yes, I was a huge Stargate SG-1 fan! I love sci-fi and I love comic books. Guilty music? Gustavo Cerati. Does that count as a guilty pleasure? Not sure haha! Ok fine, Michael Jackson!

Why not? (See what I did there?). Jokes aside, I left music for almost 10 years. Music, in turn, never left me and after having spent a long time in introspection mode, I learned that the music and I are one and the same. Why make music? Because the world is a colder place for me without it.

I am extremely electric guitar-driven! I will sit for hours trying different effects and sounds and when something pops out at me, then I start to build chord progressions, add in some scratch drums and bass as I go. The lyrics are very important and sometimes they come early on, and other times I have to fit them around the melody. The best songs usually fit together nicely and fairly quickly. I believe for “La Puerta Oculta” I had fleshed out the main riff, chords, bass, and 1st verse/chorus within 2 hours of starting to work on it. I always say, if that inspiration hits, go with it till you have something you want to listen to over and over again!

I practice all CDC-recommended guidelines both in my life and at shows. I suffered losses like many others, so it has hit me and my family very hard. A lot of my new EP was written and produced during the height in 2020 so it was a way to be productive during the most uncertain times of the pandemic. We need to keep going and keep finding ways to express ourselves even during the most difficult of times.

Looking ahead, what’s next for Daglio?

I have already filmed the follow-up to “La Puerta Oculta,” and it is a music video that we went out to the desert near Las Vegas to film! I worked with my long-time friend and director, Rafa Garcia, as well as my good friend Nicholas Caserta, who plays the professor in both videos. I plan on releasing a 5-song EP by the summer. There is lots coming in the world of Daglio in the next year, I can guarantee that! So, in good ol’ ‘80s fashion: To Be Continued…