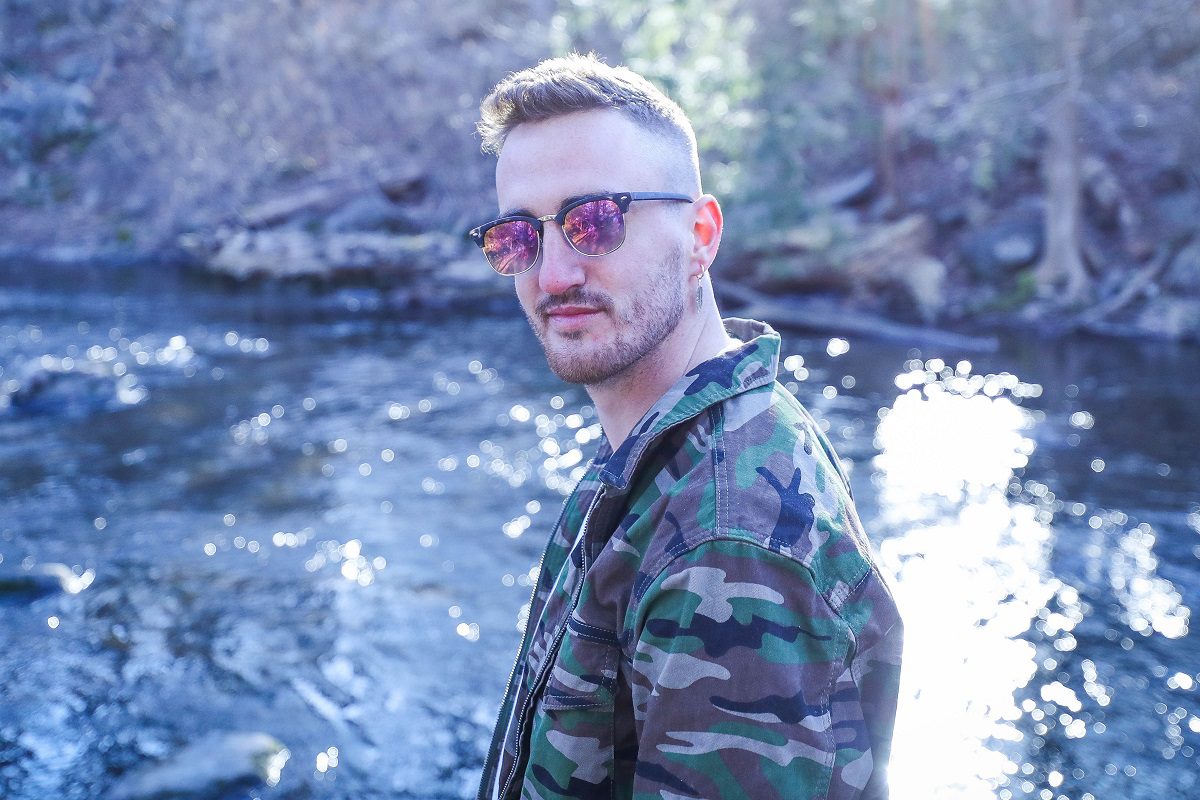 D.K. Lyons takes my first and last initial (People call me DK anyways), and Lyons comes from a lot of places. My sun sign is a Leo, my mom has been obsessed with lions since I was a little kid, and my first guitar teacher’s last name is Lyons, so it felt like a natural fit!

I told my mom when I was 5 years old that I was going to be a rock star when I grew up, and I’ve essentially been writing songs in some shape or form ever since then. It’s just something that I’ve always had to do, not ever really a choice.

Starting with just writing titles down to writing lyrics to pick up a guitar and learning how to produce, I’ve been addicted to it ever since then. I’ve written over 1,500 songs in my life, and I like to say I’ve learned 1,400 ways how not to write a song. But I’m really excited about honing my craft the way I have the last few years and getting ready to put my album out on June 26.

Tom Petty has always been the biggest influence on me since I was a little kid. He’s the reason why I told my mom I wanted to be a rock star in the first place. And I love all of his music even to this day, whether it’s his biggest hits or his most obscure albums, I adore it all. And I’ve come to feel the same way about The 1975 as well, so I my two biggest influences are vastly different and generations apart, but Tom and Matty both speak the truth and are authentic to a fault, and that’s what I admire most and aspire for. And I certainly aspire to take style cues from Matty as well, he’s the ultimate modern-day rock star.

Every artist’s first album is essentially a collection of their favorite or best songs from a long period of time leading up to it, so naturally, it’s easy for a lot of the material to be focused on the past. But for me, I’m always a bit of a romantic about everything, and once I put together the collection of 12 songs, it stood out to be the common theme was me romanticizing my past.

And of course, there’s a line in the song “Long Way Home” that goes “Running from a past that I romanticize in my head/ forgoing any thought of accepting that it’s dead”, which really speaks to that concept. It can be dangerous to romanticize your past for fear that it takes away from your present and future, but for this album, I’m saying that it ultimately shapes you, especially the romanticized moments, so it’s always about a balance of all 3.

The greatest challenge I face constantly is self-doubt, especially because I’ve taken a non-traditional path and been quietly making music behind closed doors for so long, that I’m always thinking that people are going to reject it. But I worked insanely hard on this album, ducking out of work for 4-5 hours per studio session every week for over a year, working tirelessly on everything that went into this album. And I’ve received a lot of positive feedback thus far which has validated the entire experience, and I can only hope that it continues.

Absolutely not, because thinking you’ve become the best at something means you don’t think you can get any better, and I never want to lose my humility. Do I take pride in the way that I write lyrics and think I stand out if people give me the chance? Absolutely. But I also look back at my album and still have thoughts of wishing I could tweak things more because ultimately there’s still an insecure, terrified teenager inside of me who doesn’t think he’s worth anything and hanging on to that pushes me to always want to get better, learn more, and never get complacent. It truly is a journey for me, never a destination.

After my album drops on the 26th of June, I’m going to really be working to put out music videos every month until I’ve done one for every song on the record (I’ve already put out 3). My day job is running a video production team at a marketing agency, and I’ve always been as much a visual storyteller as a musical storyteller.

When I put my EP outback in 2018, I ended up making a video for each of the 5 songs, and when I thought about the best way to promote my album for as long as possible, I figured why not do the same thing now? And I also still love long-form storytelling, so next year, once all of the videos are out,

I’m already working on a full visual version of the album that will include all of the music videos in order and then little visual + musical interludes between the songs to tell a full story of the album. Other than that, I actually had a number of electric gigs booked in NYC before the pandemic began, so really looking forward to things progressing safely so we can get back to live music!

A massive thanks to my mom for all of her contributions to this album behind the scenes. As a single mom, she’s always put my needs and interests before hers, so I can only hope to use my music to return the favor someday. Also a huge shout out to my valiant producer Steve. We became fast friends and share the same musical intuition, so it was such a pleasure to work with him on this one. And he’s a fantastic guitar player who lends a number of different moments on the album that really take it to the next level.

Fall in love with the grind. There are no shortcuts and no guarantees, so control what you can control. Whether it’s dedicating time every day to rehearsing, trying and failing over and over on different promotional tactics, or pushing your writing or producing when it would be easy to settle into a formula.

If you’re able to fall in love with these things, it will make everything else around you that much more enjoyable as well. And at the end of the day, do it because you love it, not because you want to get rich or be adored by screaming fans or travel the world. It’s cliche, but I could spend 14 hours in a studio working on music and never get bored, never thinking about the end results. And if those things do happen, great! But if they don’t, the only way you’ll ever get there is by loving everything you do when nobody’s watching or paying attention to you.