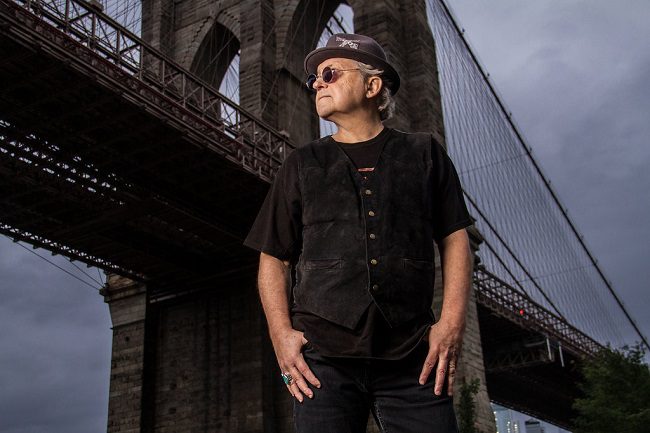 The sound of DownTown Mystic is “vintage yet modern”, continuing in the legacy of rockers like Tom Petty and Bruce Springsteen. The music is rooted in all the great traditions of American Rock‘n’Roll, blending storytelling songs with vintage guitars and analog recording into a unique style that owes nods to Buffalo Springfield, The Byrds, The Beatles and Rolling Stones but somehow manages to sound as contemporary as anything currently available.

I was managing artists at the time and went into the studio to record some of my songs to work on in my spare time. I had no idea for a project at the time and certainly not what it would eventually become. Over the next couple of years, I would go to the studio and tinker with the songs.

After finishing them it was apparent to me that I had the start of a project for myself. It was at this point I started to think about a name for it. I wanted something that related to me personally.

Besides rock’n’roll music, I have a keen interest in all things mystical. I’m a numerologist and have studied Astrology, Tarot, Runes, etc., so I was looking for something along those lines.

One day I was driving up to Boston with a band and on the way, we were passing by Mystic CT. On the side of the road, I happened to see a small worn wooden sign which read “next stop downtown Mystic”. I immediately knew I had the name for my project. I never saw that sign again on subsequent trips.

I’ve always had a love of music since I heard it playing on the radio. When I was 5 I was teaching the kids I hung with parts to songs so that they could back me up on singing in the street. lol As a teenager I started playing in bands so it wasn’t a stretch for me to get more serious when I got to college.

I formed a band there and got my first Production Deal. From that time on I knew what I was going to do for a career. As I got older and started working more in studios, I became more interested in making records. Eventually, I left a band to focus on the studio and pursue my writing and recording goals there.

I grew up at a great time for music and soaked it all in. Guys my age like Bruce Springsteen and Tom Petty have the same background and influences. I’ve played and recorded with Garry Tallent & Max Weinberg from The E Street Band and it was very easy throwing out influences to them when I was looking for a certain style for a song.

We all lived and breathed in our 45s and LPs growing up. I was heavily influenced by The Beatles & Stones in my formative years and as I started to write songs I heard Buffalo Springfield and then the harmonies and acoustic guitars of CSNY and I began to evolve in that direction. My passion is still rock’n’roll and my influences are all brought to bear on what I do.

My last album, “Rock’n’Roll Romantic” was very intense and emotional. It was somewhat of a concept album. So when I started to think about a new project I knew that it was going to have a positive vibe to it and all the songs would be in that direction, even though I didn’t have any songs in mind.

Then I remembered on 2 prior projects that I had cut a new track for each one but I never finished them. So I had 2 new songs to write lyrics to and finish recording. The 1st one I finished was called “The Wish” and once I had “Better Day”, the project took off from there.

My greatest challenges are somewhat self-inflicted. lol, When I’m in the studio I’m consumed with making great records. There’s a difference between writing and recording songs and making a “record”.

It’s difficult to explain but those who know the difference know what I’m talking about. My challenge is to make magic in the studio and put it on a track. It’s one of the reasons the name of my project includes the word “mystic”.

My greatest challenge leads to the greatest attribute in my work ethic, which is primarily perseverance. Also being in the moment and open to the possibilities, as well as knowing when to act on them.

Here’s an example of what I mean. I had a session with a guitar player to record parts for 4 songs. On the 1st one, I wanted a dobro but after 2 hours we both knew it wasn’t working and ended up settling on a part. Once we moved on the session got better and moved more smoothly.

After 10 hours I called it a night and as he was packing up he apologized for taking so long at the start and not getting the dobro part. I told him it was as much my fault since it was my idea for the dobro. He then said he had a different idea when he was working on the song the night before. I asked about the idea and he played me about 30 seconds of it when I told him to stop, turn on his amp and said we’re going to record it now.

I ran into the control room and told the engineer what we were going to do and he played the part and nailed it in basically 1 take. It was magic and totally completed the track! That’s what I mean about being open and in the moment because you never know when magic can happen, but just be ready to recognize it.

In my opinion, I think I am the best at what I do because I know my limitations. I’m great at singing uptempo rock’n’roll songs but I’m not a great singer. I try to limit myself to the lane I do the best in. I’m in a unique position because I don’t really sound like anyone else.

When I started I didn’t have a fan base or any expectations so I was creating the music the way I wanted to hear it. My motto is “vintage yet modern” and that means there’s a retro aspect to the sound but it’s as modern as anything currently in the market.

I get compared to classic artists in the 60s 70s & 80s but if you played my music against them you would have to agree that the only time my music could exist is right now. I also think I’m as good a producer as anyone doing what I do. I’ll put my ears up against anyone. I make records that can compete with everything out there.

My music is played on Radio around the world, and through sync licensing, I have music on over 175 TV shows. Both Radio and TV judge you on the quality of your music and the quality of the sound.

Right now my plan is to release my new album “Better Day”. I decided that I needed to take DownTown Mystic to the next level so I signed a Licensing Deal last month with UK Label Last Man Music, who will do worldwide digital and physical distribution ex N. America.

The digital album comes out this month and the CD will be released in February. Last Man is also talking about doing a Vinyl release which would be my first. My hope is things start to take off overseas so that I can tour in Europe.

There are so many people that I would like to thank and first and foremost is my wife Barbara, who has been with me every step of the way. I’ll confine the rest to the studio since that is where DownTown Mystic mainly resides. I want to give big shout outs to my main cohorts in crime, Steve Holley and Paul Page who form the rhythm section for Ian Hunter’s Rant Band.

I’ve been incredibly lucky to play with them over the past 10-12 years and they bring so much to the tracks we cut together that it’s incalculable. Bruce Engler has been a longtime collaborator with his guitar and vocal work. He co-wrote 2 of the songs and I also recorded one of his songs on the new release.

My engineer of over 20 years, Ben Elliott has been a big part of helping me get a great sound and the mixer on the new album, Stephen DeAcutis, and my mastering guy, Larry Bentley, has delivered my best sounding record yet. I’ll leave it there because I’ll never stop thanking everyone I need to thank.

I think that artists should be DIY as much as they can be. This also means learning about the business side. There’s a reason it’s called the music business and too many artists forget that.

You can’t be successful if you don’t have a full understanding of what you want to do and how to do it. It’s not enough to be a talented musician, songwriter, etc., especially in today’s music business. I was once an artist manager and I saw artists with the attitude that business was a bad word.

This can create and setup failure for them because they get a mindset that will sabotage them. Embrace all aspects of the DIY model. It’s a good amount of work but it’s worth it in the long run.