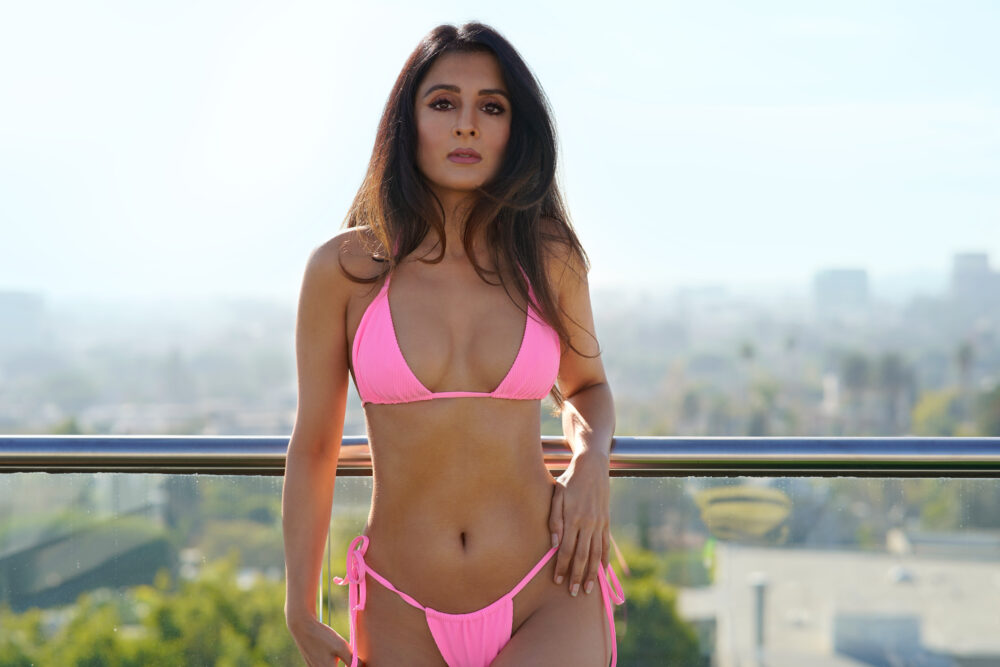 Demi Mann is a beautiful British-born Indian actress that has been in various film and television roles such as Skyfall, Emergency: L.A., Frank and Ava, Astral Princess, Starblessed, and Spirit 7 as the lead. Her love for food, travel, animals, diversity, and her heritage makes her so fun to chat with; her personality is open and exciting, with an elaborate energy and tone.

Being that Demi was raised in London, Greenwich, culturally and ethnically, she is Indian and very proud of heritage. She currently lives in Los Angeles, CA, but still thinks about the British film and television that she would like to be a part of. “I think about the shows I love watching, and I envision myself there. I think I would be a great fit,” she says laughing. “I love The Bridgertons, The Crown, Beecham House, The Witcher, The One, and would love to be in a Game of Thrones spin off since there are going to be a bunch of those in the future and I loved that show so much. It really feels like the sky’s the limit in that department.”

Demi is really proud of who she is and wants to celebrate that. “My mum taught me how to cook when I was a kid so that’s always stayed with me. I can cook a lot of dishes. I love fresh ingredients and prefer to shop for fresh fruit and vegetables daily.” She loves good food and travel, it’s something that she loves to have in her life. “I’ve watched Chef so many times! It’s got both travel and food in there which is a great mix,” She says laughing. “The line, ‘Its molten see, It’s molten’ just makes me laugh, it is such a colorful, flavorful film. Jon Favreau is one of my favorite directors and it would be a dream come true to work with him. I love his vision for films and television shows.” Demi says that she would love to work on The Mandalorian because it is one of her favorite television shows for sure. “I just love Baby Yoda. Now that would be a role that would take women of ethnicities to a whole new level. I also love the Netflix series, Somebody Feed Phil; it is so great. I actually got to meet Phil Rosenthal; he is so lovely and so down to earth,” Demi shared.

Demi’s enthusiasm for doing action scenes is instinctual. “I was an action star and a daredevil when I was a kid even though I was shy. I jumped out of the second-floor bedroom window when I was just four years old so that I could get to my mum as I saw her getting out of the car.” She stops, anticipating the reaction. “Yes, I really did jump out of the window! It gets better than that, though. I first jumped to the roof and then hung off of it. I dangled for a few moments just for fun, then jumped down to the garden. My poor dad nearly had a heart attack as he ran over to save me, but I was fine.”

Demi lived through that experience and went on to ride bikes, roller skate, and climb trees. “I used to run all over Greenwich Park and around the Thames barrier.

I also danced at a young age, including Indian dancing, and I danced as a kid at our parties.”  All these experiences have given Demi the ability, stamina, and courage to train and learn the many techniques to do fight scenes.

Her ability to go from multiple genres of shows and movies shows her versatility and range. The chance to be a part of British period dramas, a science fiction series, historical films, and book to film adaptations are interesting and exciting to her. With her passion for film and TV, she wants to see diversity in the coming times. “I’m promoting ethnic diversity. I loved watching movies when I was growing up, but I saw that other actresses didn’t look like me, and I wanted to change that. It was a good way for me to see women’s equality. As a child I would watch movies and TV and wanted to be like the role models I saw on the big screen. I wanted to be part of that storytelling, entertaining, and be like the role models I looked up to,” She says.

Demi now is a successful actress, she works with charities, a passionate force to be reckoned with, and her instagram has over 120K followers and counting. Her hard work, pride, and great personality is what has catapulted her into her career and her future. “I want others to look up to me and feel like they can achieve anything regardless of their culture or ethnicity. They can achieve these big dreams because I am.”

For more information on Demi Mann follow the links below: