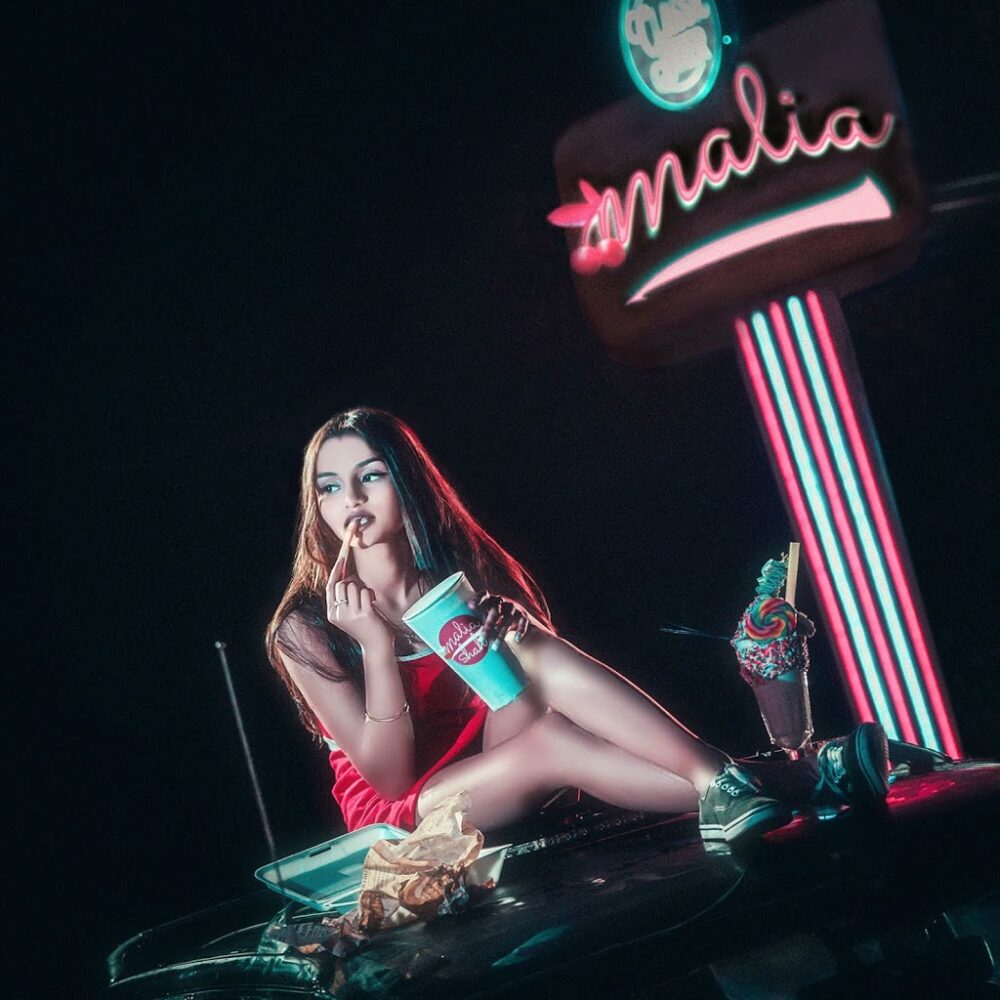 Malia. I was born in New Jersey, but I was raised in Queens, New York. A couple of years ago we moved back to New Jersey.

Muzique Magazine. How did you come by your stage/band name?
Malia. Though I was born as Muskaan Shah, my parents always called me Malia. When I had finally asked why they never called me by the name on my birth certificate, they told me that in Swahili, the name “Malia” meant “Queen” — something they always thought of me of. They told me that they had come across the name after they decided on the name “Muskaan,” which means “smile” in Hindi. And thus, I kept my stage name as “Malia Shah.”

Muzique Magazine. When did you start making music and taking it serious?
Malia. For fun, I began writing songs when I was twelve. But during my freshmen year of high school, when I was fourteen, I began taking it seriously. I finally understood the value of making music that my twelve year old self could never comprehend. Writing songs not only helped me express my feelings and my past in way I didn’t think was possible, but it also made me realize that how much of an impact a combination of notes and words can have. Whenever I felt inspired, I’d write a few stanzas and whenever I had a new melody stuck in my head, I’d record it. And soon, in just a few minutes, I’d put the tune and the lyrics together to finally make it into a song.
Muzique Magazine. Who influenced you to become an artist/band? Why?
Malia. My mother always had a drive for music. You can always hear her singing in the kitchen from any room in the house. When my mom enrolled me for singing classes when I was five, I didn’t think too much of it. I just thought it would be an extracurricular activity I’d do for a year and then ultimately quit. But after my first voice lesson, I never wanted to stop. Though I completely awful at singing at that time, I knew this is what I wanted to do. I understood my mom’s love for music. And she passed it on to me. Of course I had many other influences, including Amy Winehouse, Lana Del Rey, Milky Chance, etc. But no singer or band has ever inspired me as much as my mom has. It’s because of my parents and my sister that Malia Shah exists.
Muzique Magazine. What are you currently working on and how can the people find you?
Malia. I’m currently writing new songs that should be out in the next few months. People can find me in social media platforms such as Instagram (@maliashah), Twitter, & Facebook (both @maliashah22).

To listen to my self-titled EP, “Malia.” listeners can listen on Spotify, Apple Music, Tidal, Napster, Amazon Music, and many other streaming platforms. You can also find me on Youtube Channel, “malia,” for official lyric videos currently, and in the future more content will be available!