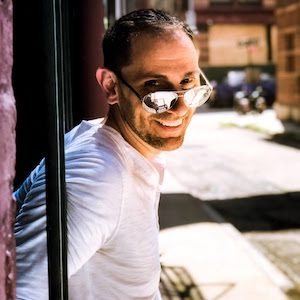 New York City Optometrist Austin Marolla has always wanted to help people see their dreams more clearly, whether that means providing free eye exams in homeless shelters, or writing feel-good music with a personal message. Above all, Austin strives to write songs that are lyrical, emotive, and resonant with his audiences. From his music, Austin hopes to give others the same spark of passion that he has, in hopes they will be able to follow their own dreams and blaze their own path.

“Christmas Kiss” is Dr. Marolla’s holiday gift to music lovers around the world. Nine original songs running the gambit from peaceful nativity ballads to tongue-in-check sing along yuletide tunes carefully compiled by a singing care-giver who wants to warm hearts during the joyous season of Noel just around the corner. There’s also a “Christmas Kiss” (Deluxe Edition) that not only includes music, but also videos intended to be enjoyed by anyone wishing to crank the lighter side of the holiday spirit up a notch or two. You may even learn how to do a new dance, “The Santa Shake”, along the wintry way.

All members of the media are cordially invited to attend Austin Marolla’s Big Fat Christmas show on Saturday, December 8th, 2018 at 8PM, at New York City’s Symphony Space. To be included on his complimentary entertainment industry guest list just contact the representative listed below. A North American radio and press campaign has been launched to promote “Christmas Kiss”. Mainstream Pop and Triple A radio stations have already been serviced with the album’s lead single, “The Santa Shake”, which of course is featured on this full length release. Dr. Marolla’s press kit will be provided upon request. He is presently available for interviews and/or appearances. Additional news, updates and other information about upcoming events may also be found at: https://www.facebook.com/austinmarolla