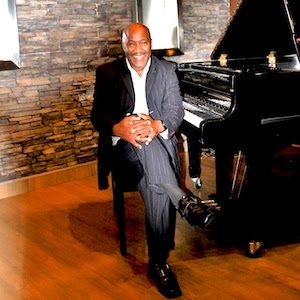 Chicago’s Charles Matthews Jr. has toured the world as keyboardist and musical director for many R&B royalties including Jerry Butler; The Impressions; Lloyd Price; Gene Chandler; Angela Charles & Windsong; The Chi-Lites; Shirley Jones and the Jones Girls; Tyronne Davis, and many others. After many years of touring and sharing the stage with these legends of the music industry he’s now released an album titled “Interpretations”, where he is able to perform the many classics that have touched our minds and hearts and bridges the gap between smooth jazz and classic R&B interpretations.

Twelve tracks are compiled from yesterday’s R&B classics, today’s popular music standards, tomorrow’s unforgettable Jazz tunes, and are all brought together on his instrumental collection. All of Mr. Matthews’ years on the road working with past and present entertainment greats are what he endeavored to share with all who listen to “Interpretations” (Keyplexity Records). Each selection choice and performance is not only intended to be a reflection of the life he’s lived on and off the sound stage, but is also as a way to tell the many stories of his travels around the globe through music.

A North American radio and press campaign has already been launched to promote “Interpretations”. Smooth Jazz and Adult R&B mainstream radio stations have been serviced with the album’s lead single, “I Can’t Help It”, as were select publications with the “Interpretations” full length release. His press kit will be provided upon request to all members of the media by contacting the representative listed below. Charles Matthews Jr. is presently available for interviews and/or appearances. Additional news, updates and other information about upcoming events may also be found at: http://charlesmatthewsjrmusic.com

4 Questions with Pianist and Pedagogue Dr. I-Lin Tsai on the Future of Piano Education