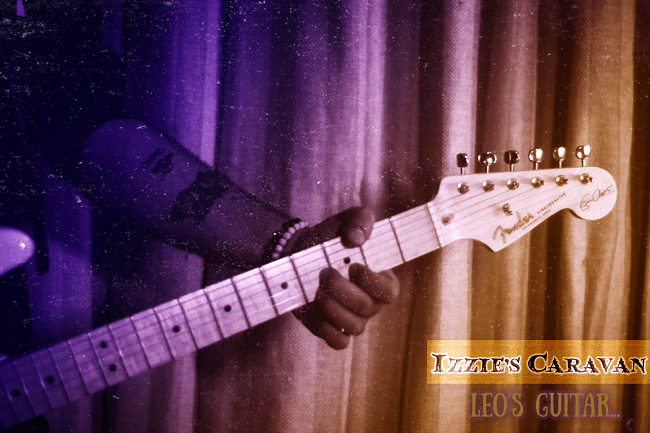 In all honesty, I’ve always perceived ‘Izzie’ as an alter-ego…The Batman to the Bruce Wayne so to speak. So, it’s essentially a gateway into vicariously living a life that every child dreams of when they hear rock n roll and the blues in their early years.

I really needed a vehicle through which I could express my passion for the blues and I guess that’s what inevitably led to the creation of Izzie’s Caravan. While this is purely a solo project, the reason I’ve added the ‘Caravan’ part to it so as to invite a community of artists in the same mold and vision that I have to join me in collaborating on certain songs which can help add an element of diversity.

I have to say it goes back to when I was maybe about 4 years old and my dad cranked up ‘Money For Nothing’ by Dire Straits. Imagine a kid listening to the entire opening segment which is just this juggernaut of drums and guitar and it comes flying on all cylinders through the speakers. At that point, I knew that the guitar would have some part to play in my life. From there on it’s been a journey to discovery.

I think being of the ‘old school’ generation had the added advantage that we had access to the same records our parents were listening to. and so there was this kind of generational amalgamation where we grew up listening to the same great records and bands that they did. So there was this consistent, rather lifelong, journey of exploring one band after the other whether it was the Stones or Zeppelin or Clapton.

And through it all, there was this common denominator…which was the blues. Initially, when you’re younger it’s difficult to pick up on that but with rock n roll, it’s interesting where the more mature you get, the more you keep reverting back to history to the great blues records and tracks and that for me has become such an important staple of my music and identity.

As a kid, I remember watching these videos of Joe Perry and Aerosmith and I was absolutely blown away by just how ‘cool’ this guy way. So, later on, discovering records like ‘Rocks’ was such a profound moment in my life. That literally has to be the greatest rock record made for me. Similarly, I was very young when Appetite for Destruction came out and those are the records that we cut our teeth on.

What really fascinated me about both bands was not the guys who were taking the spotlight, but the guys in the back who were quietly going about their business and giving the tight edge to their sound. So again, discovering the rhythm and personalities of guys like Brad Whitford and Izzie Stradlin was very influential on me. Then, of course, growing up, Tom Petty and the Heartbreakers, Mike Campbell specifically, and John Fogerty have been a huge influence on me.

But when I got into authentic blues, that’s when I realized the life-changing experience that was for me. I literally have anything live by Stevie Ray and Clapton, and John Lee Hooker records blaring all the time now whether I’m at home or in the car. Its literal food for the soul. I mean, you listen to Clapton and Stevie Ray live and it’s just phenomenal stuff!!! No one can ever replicate the level these guys reached at…but what they do is give me that drive to push myself harder to be a better musician.

However, at the end of the day, the two guys that really need to be credited for anything I do now musically are Buddy Guy and Lightnin Hopkins. To me, Lightnin’ Hopkins was the complete blues musician…a man with a story and the sound!

When I started working on ‘Leo’s Guitar’ I think there was a whole load of pent up anger that needed to be released. I had the ideas for ‘Two in The Bush’ and ‘Lightnins-A-Howlin’ sitting around, but it all honestly started coming together when I recorded the instrumental track ‘Leo’s Guitar’.

I’m a proud Fender fanatic and I really wanted to pay tribute to what this instrument truly is…it’s not just a guitar its a historical and cultural artifact! And it’s also swallowed up all my savings so I had to compensate myself in someway :). Anyway so I laid down the track Leo’s Guitar in one take and I wanted to capture that blues authenticity that I find in Lightnin Hopkins records. From there, Two In The Bush followed which is, of course, a very scathing attack on the elite, and ‘Lightnins-a-Howlin’ which is honestly such as special blues track for me. I call it my worst John Lee Hooker impersonation :).

After I was done with the ‘Leo’s Guitar EP’ I was actually planning on working on another blues-based EP. It just so happened that one evening I was listening to Tom Petty and this track ‘Echoes’ which was on a loop. Honestly Tom Petty means the world to me. The true artist with integrity!

So anyway, I got so inspired at that point, I had these song ideas lying around for at least 8 years or so, and I ended up going back to them. Next thing I knew I had the basic song structure for ‘Zephyrs’ all done and it just sounded so good to me that I ended up completing the entire ‘ZEPHYRS EP’ and releasing that a few weeks back.

It’s honestly such a shift in gears but I personally think it was therapeutic for me to release an Ep of melancholic ballads based on real-life experiences. So whether it was ‘Tracii’s Ballad’ which is written for my best friend and cat Tracii, to ‘Holy In Your Smile’, the entire process became such a mellow experience and I honestly think it did wonders for me at a personal level.

I couldn’t be the best at what I do because those that came before me truly perfected the art of what they did. In all sincerity, when I listen to Clapton or Petty or Buddy Guy, there’s this sense of humility and appreciation which is so profound and fortunately, it allows me to break free from the limitations that surround so many other artists and guitar players.

I never did understand why most people perceive the guitar as a competitive sport…how fast this guy plays or how technical that guy is! never understood that mentality and I genuinely feel sympathetic towards people bound to such limitations. To me, music is a language that expresses meaning…I would not want to converse with someone who speaks really, really fast and expresses nothing.

I’d rather converse with someone who articulates their thoughts well and that’s how I always view guitar players in particular…what do they have to say to me? so when you hear the articulation of someone like say Mark Knopfler that when you realize the beauty of the guitar.

Honestly, after releasing ‘Leo’s Guitar’ and then releasing ‘Zephyrs’ in such a short duration of time had me worn me out….particularly the ‘Zephyrs Ep’ which was a bit emotionally draining. Then again…old habits die hard. So the last few days has me back dusting off the Fenders and getting them ready for the next EP titled ‘On The Pull’.

It’s already shaping up to be a very dirty, nasty blues-based Ep and that thrill of listening to the completed versions is really driving me to complete it soon. Can’t wait for it! Hopefully, it should be available on all digital formats by May 2020!

The one thing that most people don’t realize is the wonderful power of the support that people provide behind the scenes… the uncredited individuals who are the best fans any artist can ask for. First of all, everything that I do musically is in memory of my best friend and sister Karen who left us a while back. She was the rock that made sure I learned the art of humility and passion in everything I do.

She’s in every song I write… Equally so, I’m an absolute animal lover and my cat Tracii means the world to me. So I have to thank her for putting up with me this entire musical journey. Of course, I have to thank my confidantes Ron and Mahad for bearing with the billions of times I would subject them to listening to these tracks and getting their feedback. And finally, the love of my life Amo…she makes everything so special and meaningful and her positivity drives me through the good days and the not so good days.

Both Eps are also available on all major music platforms including Spotify, iTunes, Amazon, Deezer, Napster, Tidal, etc. Check the Eps out and enjoy it!

Be yourself! As a severe introvert, it has always been difficult for me to publicize or promote my music. But once you realize that it’s your own creation and it’s something you will carry with you forever, own it and be proud of what you’ve accomplished. We live in a world of arbitrary opinions and most of them are irrationally harsh… but it’s important to believe in what you do and what you create!