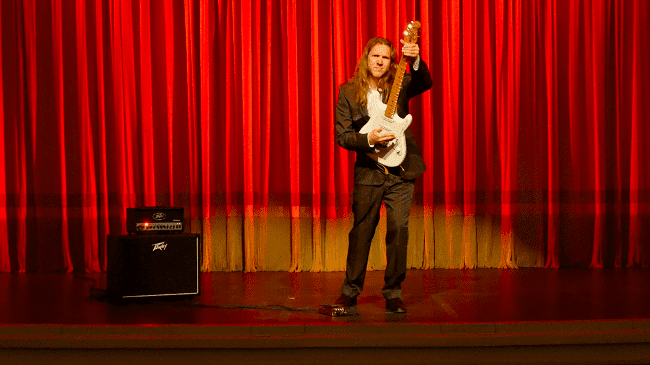 As a kid, the father of my neighbor gave me that nickname. As I recorded my first solo album in Sweden, the nickname popped up again and stayed until today.

Tell us about the start of your professional career?

I have played in all kinds of bands, some professional, some not – but always with a lot of fun and passion. After finishing university, I had already written some own tunes. So I recorded my first Solo Album and performed around the world. The Solo Album was the ignition of my professional career.

As a teen, I spent hours sitting in front of my record player and listen to all kinds of rock bands like Led Zeppelin, Iron Maiden, Slayer and so on. I was deeply impressed by their music and the cool record covers.

So I bought my first electric guitar. After listening to the „Surfing with the Alien“-Album of Joe Satriani, which was given to me by my first guitar teacher, my heart was on fire and I started exercising seriously.

Tell us about your recently released ’Glory, Death and Heroes’ album?

It is my fifth studio album, I discovered cinema sounds for myself on that album. The melodies are catchy, have virtuoso phrases and have a high recognition value. Titles like “Friendships” or Sunborn Sinje„ deserve the addition “Beware of catchy tunes!”. Furthermore, I have Jennifer Batten on guitar and Alexander Veljanov on vocals as guests on the Album.

What’s the inspiration behind “Glory, Death, and Heroes”?

Because of my collaboration with Peavey, I was able to test the Peavey Revalver Software and was thrilled by its tone and possibilities. It was exactly this sound, that brought me to the idea of recording epic, cinematic tunes. I was inspired by Ramin Djawadi “Game of Thrones“ or Jeremy Soule „Skyrim” and really wanted to transfer this epochal feeling to the guitar.

What attracts you more, writing, composing, performing or working as an instructor?

This is a tough question. I really like to close my eyes and get lost in the music, but best is, to share this with other musicians. And of course, it is amazing to render my passion to younger students and see, how their hearts begin to burn for music. So everything falls into place by combining all these aspects of music.

What’s the biggest achievement in your career so far?

2011 I performed at the Montreux Jazz Festival. Besides that, I played concerts all around the world and have done some great recordings with Jennifer Batten (Jeff Beck, Michael Jackson), Jerry Donahue and Rhani Krija (Sting). And I love the fact, that my tutorial E-Books are available in four languages already and set a benchmark in the multi-touch books for learning an instrument.

Asian Rock Singer AMEL D going viral with her new single I’m Your Rain
Rapper, Songwriter, and Actress “Audie B” talks about love for her craft and more
Advertisement