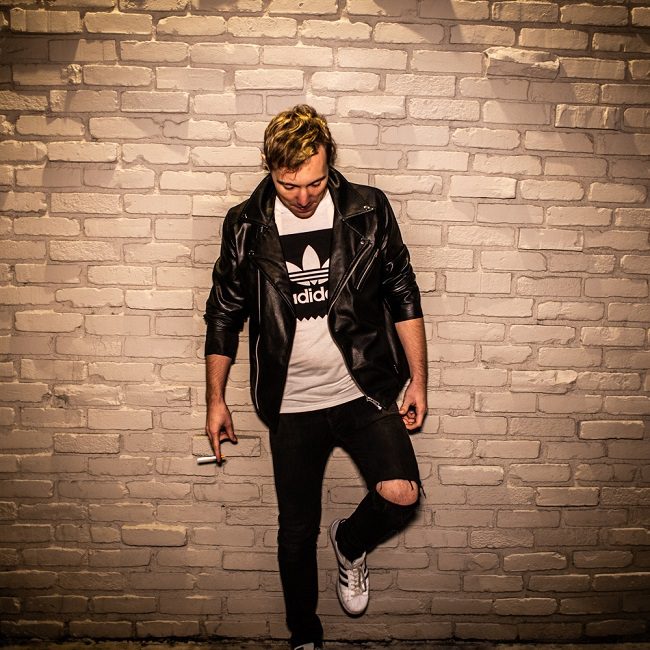 Jeff II is a French guitar player and music producer based in Los Angeles, California. After years working as a session guitar player, he started producing and releasing his own original music online. His debut single ‘Sleepless’ was released in July 2018. The music video for the song went viral on Youtube, reaching more than 100,000 views in a few months.

His unique combination of electro-house, heavy rock and quality guitar playing sets him apart in the world of electronic dance music. His style was often described as ‘Rock n’ Roll House Music’ or ‘EDM N’ Roll’ by the press.  His new single ‘Time on my side’ is about to drop in April 2019 and the 26 years old Parisian is currently working on his debut album and his live set as a DJ-Guitar player.

My artist name is Jeff II. It’s basically my first name and the number 2 in roman numerals. there’s so many ‘Jeff’ out there, I had to add a little something to make it more unique.

I started playing the guitar at the age of 13 and I was determined to make a living out of it right away. I spent my high school years making music and after I graduated I started playing live and working as a session musician in my hometown of Paris, France. In 2016 I decided to relocate to Los Angeles to start my solo project as DJ-guitarist. It has been a great ride so far!

I grew up listening to rock music. Iggy Pop was my childhood hero. As far as visual goes, I like to keep it simple. I like punk album covers, the logos and aesthetics are always on point.

I’m a producer and a guitar player. My music is a hybrid of hard rock and electronic dance music. I wanted to create something fun that’s a bit different from classic rock or typical ‘EDM’.

I use different elements such as heavy drum beats, distorted synths lines, guitar solos, voice samples… As far as live playing goes, I perform as a DJ/guitarist. DJing is the only way to play this kind of music in front of an audience, but I wanted to keep the ‘rock’ aspect by playing guitar at the same time.

I think the biggest challenge is to find your own sound. To create something unique that sets you apart from the other producers/bands. It takes time and a lot of dedication but it’s crucial if you want to be heard and build a fanbase with your music.

I wish I was able to work faster but I’m a perfectionist. Every time I release a new track or a video, I want to make sure that every detail is on point.

I will never be the best by any means. I don’t see music as a competition, I just want to play my stuff and be heard by a maximum of people. I live in Los Angeles, a town full of world-class musicians who are trying to ‘make it’ in this industry. I’m learning every day.

Finishing my new album and working on my live sets. Then I will focus on touring and promoting my release as much as I can. I have a new music video coming soon as well.

I believe that DIY is the way to go. I record everything by myself and I don’t have a label or a manager. But I have the most important kind of support in my opinion: the support of my family and my friends. They’re still supporting me through my musical journey and I’m incredibly thankful for this.

I will say it’s important to know where you’re going. It sounds cliché but it’s true. I’ve spent years playing in local bands and recording for a lot of different people.

But at the end of the day, I realized that all I wanted was to make my own music. It’s great to live different experiences and to meet new people but if you know what you want right from the start you’ll save a lot of time. It’s all about thinking long term and never giving up.