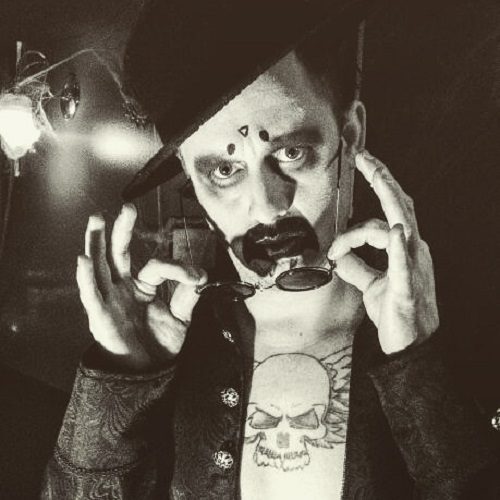 We suspect the point about Demi Dahmer is that you’re not meant to understand him. His core following and who he represents are the lonely, the misunderstood, the alienated. Demi was waiting in a candle-lit room when we showed up, sitting on a sofa and completely darkened the only light coming from a candle flickering on the coffee table.

Given that he’s been wearing black make-up and hanging around in the dark, this seems like a departure.

Do you ever felt trapped by your public persona?

It’s hard to say, I didn’t want to be exactly what everyone expected me to be. I did start this band as a joke and purposely made crappy music when I first came out.”

He’s made rather a success of his music and image, making his debut single (Drowning in Maggots).  The moment when he most reversed people’s views and expectations of him – certainly mine – was when he made the songs (she’s looking for me and White Noise) that were a big game-changer.

Get to know Demi Dahmer

‘Music helped me fill the gaps with who I am. I can also reflect my anger Inna positive way ’

“I feel like the thing I’m best at is being the icon people hate to love.”

The devil you know: is evil and a murderer. yet he is glorified.

Demi corrects me, a “mass murderer”. He has always critiqued the way the media glamorizes violence and death. And 2 years after Cyle Hoffman created Demi Dahmer by yoking together the names of Demi Lovato and Jeffrey Dahmer, he’s realized it’s perhaps a truer name for him than he’d ever realized. Because Hollywood romanticizes Murder, Death, Satan, and Sex in the films he loves. The Apocalypse Now, a thrilling soundtrack of everyday life. There’s a Demi Dahmer glamour to it. And a blood lust. He is, quite literally, the offspring of America’s true son.