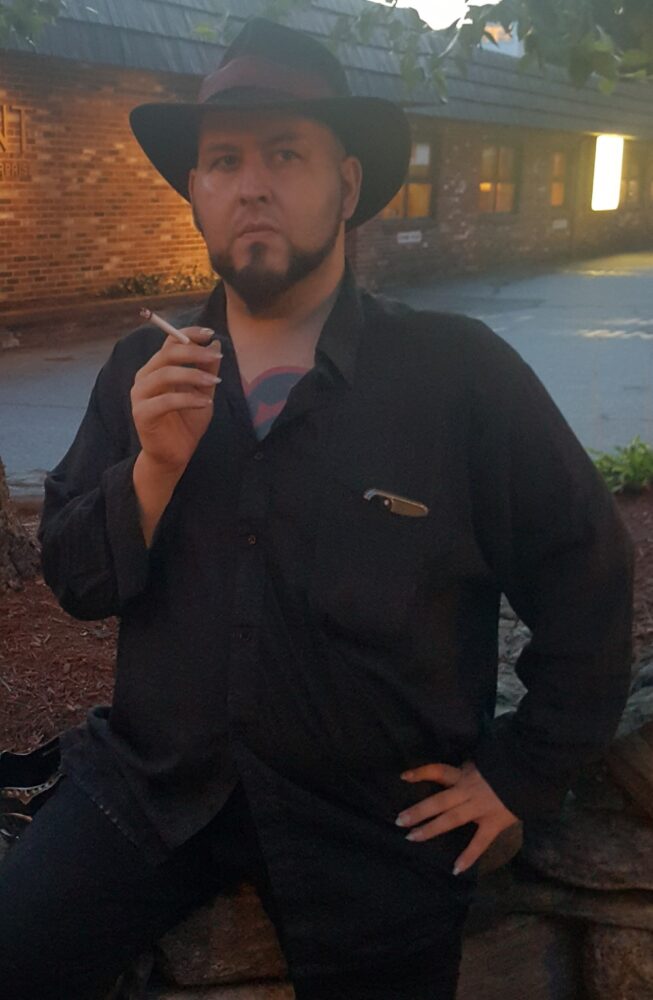 In those workshops, he has been awarded prizes and sponsored by the University, for his short stories. In that time, he was offered several Study Abroad Scholarships and wrote his thesis on the meaninglessness of literary interpretation, as examined in the fiction of H. P. Lovecraft – titled The Death of the Artist: H. P. Lovecraft and the Nihilism of the Text.

Eric is also a drag performer, portrait and landscape artist, and special effects makeup creator. When not toiling away the twilight hours, he collects signed, leather-bound books.

What are the driving factors that led to writing the book?

Ah yes, the question of inspiration. I could go on and on about the need for having been divinely inspired, but that would be a lie. I have kept a journal for many years as a form of therapy, a way of writing my thoughts out in a meaningful way.

Always in a leather sketchbook, and always in purple ink. Why purple ink? Because it’s more appealing to the eye. It’s not nearly as caustic as red ink, which connotes correction, and not as fastidious as black or blue ink, though I use the latter for quick sketches. I tend to write fluidly, stopping only for more poetic observations when I feel it would either be appreciated or when I feel as though I need to write for someone who may not have been to a place I was writing about.

I oftentimes find myself attempting to write something I myself would want to read and take into consideration that writing has certain universalities that must be abided by (even if what I’m writing may or may not see the light of day at the end of it all).

But what really coerced me into taking this journal to the next level, and transcribing it, mostly unblemished, was certain events which transpired between September and December 2020. Certain… toxic events which provided me a moment of clarity and allowed me to make the decision that I ultimately needed to put my story out. Because, after all, that is what a memoir is: a story about the author.

While there are different people/characters that may come through the author’s story, at the end of it all, it’s the author’s personal story and journey. Much the same, my book is my story from October 2018 to February 2021, beginning with designing a costume and ending the same way. It seems almost an Existential and Absurdist story when you think about it, much like Samuel Beckett’s Endgame.

If it weren’t for those events, those people coming through my life, those words, those actions throughout two and a half years, I do not believe I would have been pushed to actually write this book. And yet it ends, mostly, where it begins. It’s somewhat cyclical.

How did you come up with the title?

Toxic: From the Journals of a Madman. The title itself is somewhat open-ended. It comes from a derisive term many of the younger Generation use: Toxic. This, many times, is synonymous with “abusive” and “mentally draining” among other terms.

It was never something I thought would have been used to describe myself, but it has been slung around and I used it as the title to let people judge for themselves if I am such a thing. I do not know if I am, it’s not my place to know, only to correct it if I am. I’ve been called many things (sometimes worse things)— Catty, Bitchy, Bat-Shit insane— but something about toxic seems worse. It literally means being fatal.

I might be a delightful mix of Schizotypal Personality Disorder and “I don’t give a shit,” but I leave it to others to determine if the title is an accurate reflection of myself or those around me.

how do you respond to any concerns about the contents of the book?

Ah, as with any memoir or “tell-all” book, there is inevitably some form of blowback by people who believe they were written about. Even now, that I’m in the middle of revising parts of the manuscript before it goes out for another round of proofing, I am taking measures to ensure that it is accurate and respectful.

As far as other people’s responses, well, there was one bit of advice I was always given throughout school: “Don’t read other people’s reviews, only count how many there are.” What other people have to say about what I have written about, I would say only this: It’s my story, my personal journey, if somebody is worried about what’s in the book, then perhaps they should have acted differently.

What is your literary background?

Initially, I began my career as a literary critic or rather aspiring to be an English professor. That’s when I discovered that creative writing workshops fulfilled the standard English curriculum as well, so I took a Creative Non-Fiction workshop with the tremendously talented Robert Long Foreman and developed an affinity for writing memoirist essays, slowing down and lingering on details that others may find interesting or immersive.

Though I never officially registered as a creative writing minor, I ended up fulfilling all the requirements for a double major in English and Creative Writing by the time I graduated. Then I moved on to Graduate studies, but remained an English major, focusing on Gothic Literature. Most of my research focused on H. P. Lovecraft, Providence’s native writer, and Horror/ Weird Fiction pioneer.

I have presented my essays on the man at Providence’s NecronomiCon, a literary conference and fan convention dedicated to Lovecraftian fiction as a whole. Sometimes, I even presented in drag. That was an experience.

Has anyone written this with you, or is it a solo project?

As many would tell you, I am personable and outgoing, but I work alone. There may have been people in my life who provided me with the experiences written about in my book, but I wrote it on my own as everything happened.

When is the book expected to be released?

I am hoping that it will be released early in 2022, but if we can get through proofreading and copy-editing without any major issues, it is possible for a late 2021 release date.

It’s a fairly arduous process reading and re-reading the manuscript, especially for me, because there are parts that can be, if you pardon the expression, triggering for me; parts I do not want to relive and people I don’t want to remember.

But a true artists must suffer for their work, so it’s a necessary process to go through to ensure the best possible writing. I am, after all, an entertainer and I want my readers to feel something by the end of this book. To hunger, after all, is to be alive, and we as people hunger for emotion, even if we wish to forgo those emotions.