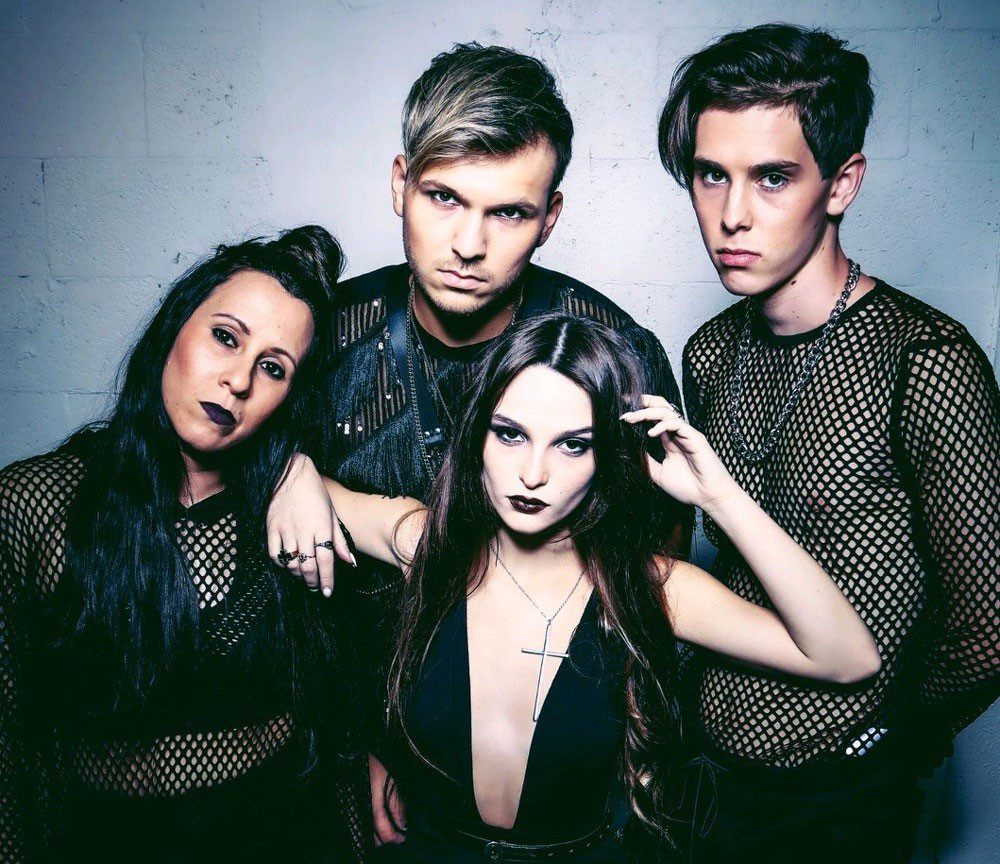 Made up of siblings Anastasia and Maxamillion, backed up by Nick Lewert (drums) and Nat Smallish (bass), The Haunt laid down the track in Phoenix.

Talking about the recording session, Anastasia shares, “Written and recorded in Phoenix, there were moments where I was beating myself up about my music. Flipping through a notebook, I came across lyrics I wrote a year prior about going on tour and leaving a relationship paused. The song is really about my 15-year-old self, thinking the person would be there or that they would care enough to wait for me; however, that didn’t happen.”

They later hooked up with Chris Hill/Digital Cyper for the video, which includes fresh images amalgamated with footage shot while on tour with Palaye Royale. Injected with electrifying energy, the video depicts concert footage, meet and greets, and merch table interludes with fans in Munich, Pittsburgh, Amsterdam, Manchester, London, Paris, and Prague.

Muzique Magazine spoke with Anastasia and Maxamillion to find out how they got started in music, what they’re listening to right now, and why they make music.

We actually got started in music when we were really young. When we realized that Anastasia could sing, when she was around 9, I decided to pick up a guitar, and we started playing covers together at open mics. After that everything started developing, and we started playing shows in our local music scene. By the time my sister was 13 and I was about 16, we were already playing shows, recording music, and touring.

Some songs that pretty much always make me go crazy is basically anything off American Idiot. I grew up on that shit, and they’re still some of my favorite songs. ~ Max

“Let Me In Your Heart Again” by Queen is my jam, whenever it comes on I scream it at the top of my lungs. ~ Anastasia

She never lets me skip it. Lol ~Max

I think the musicians that influenced my writing and music the most are The Beatles, The White Stripes, all the pop-punk bands I grew up listening to, and a lot of ‘90s rap artists like Nas, and Wu-Tang. We also take a lot of influence from some modern bands like Royal Blood, Paramore, and The Regrettes. ~ Max

Some of the artists that I’ve always loved and wanted to write music like were Amy Winehouse, Nina Simone, and Etta James. There are too many to name but I love older, bluesier music. ~ Anastasia

We’ve both been listening to Yungblud’s new album, Weird! on repeat. It’s amazing, we literally can’t stop listening to it. We’re also loving everything The Hunna’s been doing.

Who is in the band and which instrument do they play?

The band consists of Anastasia Grace Haunt, our lead singer, Maxamillion Haunt on guitar and vocals, Nat Smallish on bass, and Nick Lewert on drums. The four best friends anyone could have.

What’s the story behind the name ‘The Haunt?’

Anastasia’s been haunting our family ever since she was born LOL. She’s always been dark, creepy, and a tiny bit disturbing (I mean that in the best way possible). Our own little Wednesday Addams kinda thing. So, the name was kind of a given. ~ Max

Every song is different. Some songs Max starts producing, and then I come in and help with lyrics and melody. Sometimes, I write lyrics and melody, and he helps with musical direction, or sometimes he’ll write the melody and I’ll come in and make it better LOL. It’s always different for us, we try to keep it fluid to whatever works for the song. ~ Anastasia

What was the inspiration for your single/music video “Wish You Stayed?” What do you want people to take away from the video?

We wanted to replicate what tour was like for us, back when the world was open. We wanted to capture that high-energy feeling of nonstop movement from place to place, and how electric it all feels when you’re in it. We hope people watch the video and hear the song and feel what we felt on the road. We miss it so much and can’t wait to get back out there.

We’ve always said that we want to make music to take people away from their everyday lives, even if just momentarily. We want our music to be an escape, and a safe place for everyone listening. Our hope is to build a community of people that agree with our philosophy that caring about each other and considering each other’s feelings is the most important part of building the world that we all want to live in. We’ve also never known anything else. From the moment Anastasia started singing and the moment I first picked up a guitar, we knew that we were destined for music. We love every bit of the musical world inside and out. ~ Max

There was about a month or two in the beginning when we were stuck like everybody else was. It was really hard to know what was happening. We had shows canceled, and we all felt really disoriented and confused. But eventually, it was like, “This is how the world is now, we gotta roll with the punches.” For us, roll with the punches apparently means write and produce well over 20 new songs. If the pandemic did anything positive for us, it gave us time to really sit down and write and hone our skills as writers and composers, so we’re thankful for that at the very least.

Like we mentioned earlier, we have a lot of music to start recording. But before anyone hears those, there are two more singles left to be released off the Social Intercourse EP, so watch out for those really soon. Also, follow us on social media @WeAreTheHaunt to keep up to date with what we’re up to!