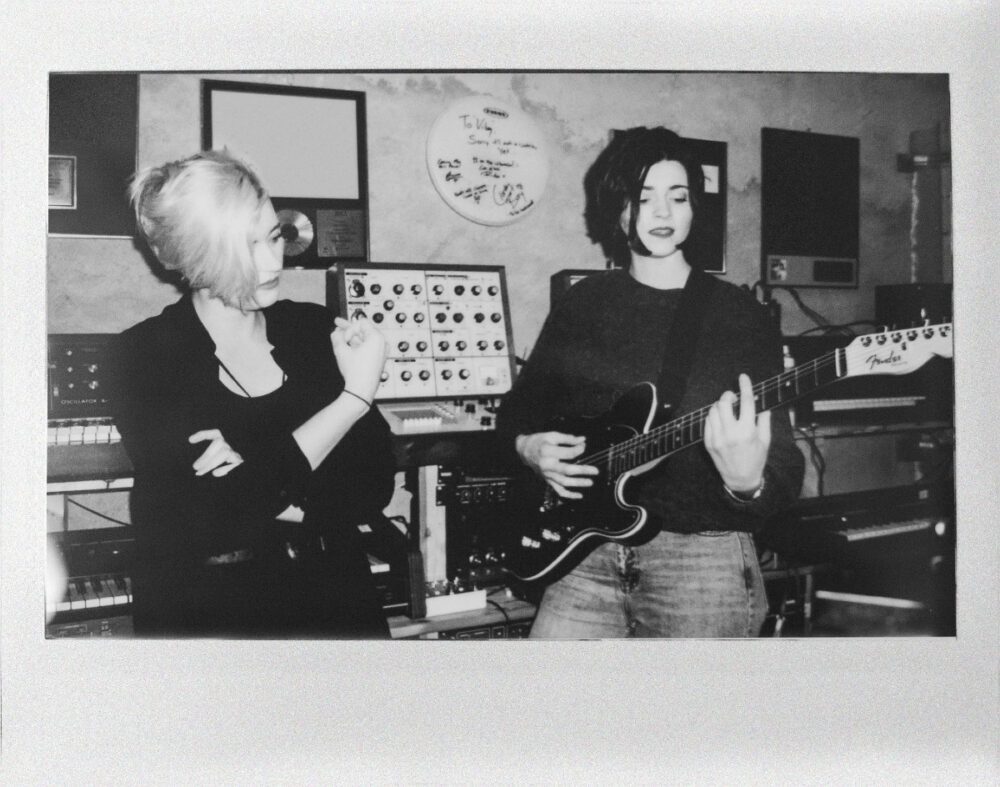 UK alt-electro-pop duo dropped their debut EP, Overthrown, not long ago. Get ready to be enthralled.

Explaining the title track, SpaceAcre says, “‘Overthrown’ is the final track we wrote for the EP and it started from a bass riff. When we were writing the song, there was a really cool moment where we spontaneously sang two interlocking melody lines at exactly the same time, which then became the chorus. We still don’t know which of the two parts is the lead line. The song is about narcissistic personalities. We all know at least one person who’s completely out for themselves, and sometimes, if you are too close to them, you don’t realize how much they are taking from you until you’ve got nothing left to give.”

Formed in 2019, the duo’s coming together to make music was totally serendipitous. Phoebe Little (lead vocals, guitar, keyboards) and Jas Scott (vocals, bass, synths, cello) were attending a writing camp in Normandy. A friend sent a recording of Phoebe singing to producer James Sanger. Upon hearing her voice, along with her use of atypical tempos and alluring melodies, Sanger arranged for the two artists to join forces.

SpaceAcre’s method of songwriting begins with Jas creating a string loop, followed the two constructing a song around it. The result is both unique and remarkably hypnotic, amalgamating strings, potent riffs, overlapping textures of synths, and an electronic rhythm juxtaposed against pristine vocal tones, compelling melodies, and lush harmonies.

Talking about the EP, they share, “The EP evolved from our first track ‘Landslides’ as we gradually discovered our sound and started to push our creative process, playing with different starting points and approaches. We love being in the studio with James (James Sanger – Faithless, Brian Eno, The Cure, The Pet Shop Boys) as the vibe and energy are amazing and you never know when a moment of manic inspiration is about to hit. It’s an EP that is close to our hearts as some of these stories are pretty personal. It’s mainly about conflict; internal battles, prejudice, and complex relationships.”

One of seven sisters, Jas is also a twin. Her twin studied dance, while Jas studied Fine Art. While at college, she joined a band and discovered music, which became her passion. On her part, Phoebe’s primary interest was football prior to receiving a guitar. Now she’s all into music. The twosome share an attraction for Sci-Fi, especially the movie The Fifth Element, starring Bruce Willis and Milla Jovovich.

Encompassing five-tracks, the EP begins with the title track, opening on emerging colors topped by a delicious bassline and crystalline harmonies. As the tune takes on resonance, it extends the bass and adds fizzing synths, twirling and humming. The sonic effect is lushly radiant, resonant, and mesmerizing.

“I Thought You’d Never Ask” features plucking strings backed by swelling synths, and then injects a gorgeously elegant cello. “So, I’ll Run On” rides on a brawny rhythm as swirling synths glide overhead. The highlight of this track is the vocals – exquisite harmonies, and Phoebe’s wickedly pure tones.

“Way Over” drips and trickles, while Phoebe’s low, scrumptious tones slide smoothly overhead. The powerful rhythm enters, giving the tune dazzling heft as lustrous colors stream by. “Landslides” features refined, gentle intro segueing into beautiful suffusions of sonic flavors, wafting, and drifting. Phoebe’s fetching voice infuses the song with delicate hues. Wow! What an irresistible voice – like an angel singing in the depths of the Empyrean.

Overthrown, without doubt or equivocation, is definitely one of the best EPs released this year.