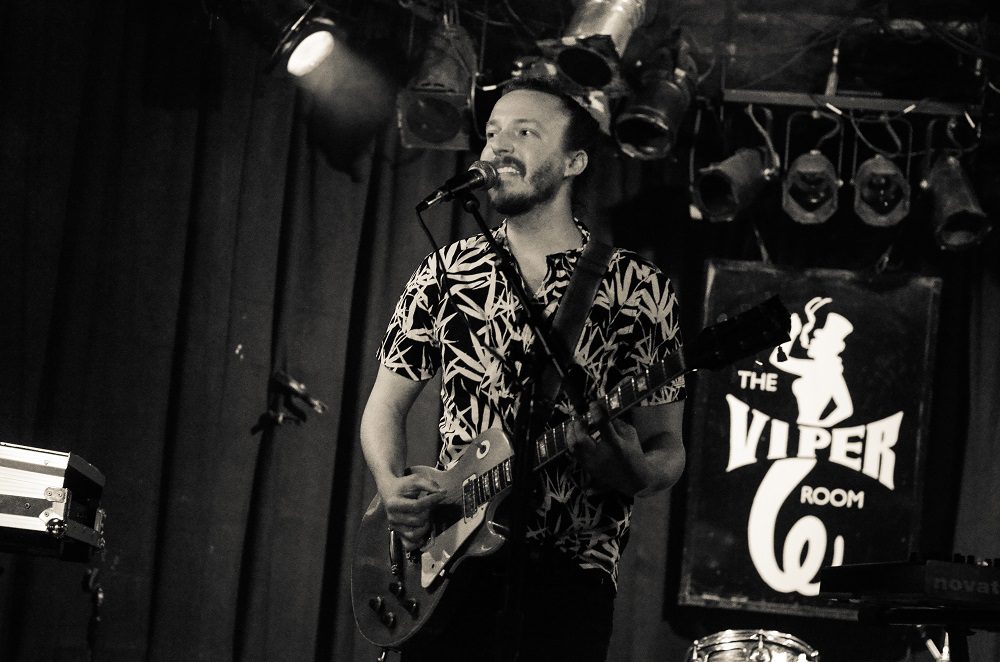 The Sometimes Island is a synth-pop band based in Los Angeles, known for its unforgettable live shows. Frontman Matt Blankenship Jr. is joined by drummer Nick Lopiano, guitarist Luke Bishop, and bassist Bryan Mears. The band name comes symbolically from a lake island in Austin where Matt grew up. Depending on the water level, the island is either emerging from the surface or submerged and hidden, waiting to be reborn.

Buzznet called the Bad People EP “the future of synthpop”. Previously a one-man band, The Sometimes Island’s full band configuration debuted at The Globe Theater in March 2019. The next series of releases began with a single Phantom Limb, and the band is proud to present the debut of the music video in October.

Thank you for taking the time for this interview. When did you start writing music? Did you know from the start you wanted to do this professionally?

I started writing music when I was 14, and I knew pretty quickly that I wanted to be a musician. The moment school lunch was over my friends and I would literally run down to the back of the fine arts building, where there was a soundproof room with a drum set and some amps.

My first band played a show in downtown Austin that year, and I was hooked. I was a huge dork and didn’t know any of the popular music of the time – only the oldies and classic rock stuff my dad would play in the car on the way to school. The other kids would come to listen, and it was such a rush. Playing guitar made me somehow cool, and I’ve tried to prop that illusion up ever since.

Your single “Phantom Limb” resembles the deep story of tragedy and addiction. Our listeners will understand what kind of addiction after analyzing the lyrics. What’s the story behind it? Talk us through your creative process.

Some of my best friends and the greatest people in my life have been addicts. You give more; they take more. I was no longer able to tell if I was enabling my best friend at the time, or if I was the only thing keeping them anchored. I wrote it about that person but tweaked it a little. I didn’t want it so biographical that they would just call me to say “hey this is about me, right?”

The lyrics wrote themselves very quickly, and it was surreal. It was one of the few times that has ever happened with me. The whole thing was written in one session, by myself. I pitched it to another artist, and regretted doing so immediately –  knew I wanted to keep it as my own. However, we were both already physically there in the studio. When they offered some notes to adapt it to their style, I got obstinate and tanked the pitch so I could keep it. I’m not proud of that, but it felt like I was putting my own child up for adoption.

What artists/bands inspire you the most? Do you find inspiration in other forms of art? Maybe people?

People are so inspiring. I love people. I’ll probably make an album called “I Love People”. I’ve been listening to a lot more folk and country lately, for the storytelling. While I don’t make that style of music, I find the specificity and authenticity of the stories so much more emotional than vague poetic lyrics. You know, the kind that I wrote when I was a teenager.

How do you stay creative?

It’s been harder lately with the world shut down in pandemic mode. I feel strongly you need to live life to have anything worthwhile to write about. Personal experiences are the key. In the past, that’s meeting strangers at bars, or hiking with friends. Lately, the safe way for me to do that has been road trips. I got carried away on the last one and ended up moving to New Mexico for a year.

Do you believe that music should be a reflection of an authentic experience that results in a deep philosophy behind the lyrics?

Absolutely. I would wager all great music is. Whatever realization about yourself, other people, or the world that you’re writing about is interesting because of the lens through which it was captured. I’m not sure why that is, but music that isn’t relatable doesn’t work for me.

Are there any people in your life who support your career?

I’m lucky to have a supportive family and supportive friends. They get it. They keep me from losing my mind sometimes. Not every girlfriend has. Maybe that’s why things didn’t work out?

Were there any specific songs/sounds that influenced you while composing the song “Phantom Limb”?

Yes – one of my favorite artists in the world is Robyn. I was listening to the Body Talk album constantly at the time. That four-on-the-floor beat with an 8th note bass synth… You hear this approach in “Dancing On My Own” and “Call Your Girlfriend”. You’re going to start moving to it whether you want to or not. It’s perfect.

Let’s talk about the production. The song starts with an impressive glissando on the piano, right before the beat drops. Did you write both the lyrics and music?

Thank you! I’m glad I got that in one take, or my fingers would have snapped off. I wrote the lyrics and music. I produced and recorded the whole thing too. I was a one-man-band at the time.

We are very excited about your upcoming music video dropping October 9th. Could you reveal a little bit behind the scenes of your music video? How did you create it?

It was the director Michael Coursey came up with. One of my arms becomes self-aware and no longer wants to be attached to my body. The choreographer Amanda MacLeod hired dancers from her company Diavolo in LA to play different limbs, and everyone had to wear black morph suits.

You know, the “green man” thing that has no face? We shot it in front of a “cyc” wall, which is where the floor curves up into the wall like a half-pipe (preventing shadows). The whole shoot was in one 16 hour day.

What are the most challenging things about being a musician?

The first thing is creating a situation where you’re supporting yourself financially. There’s not enough time to do everything, so you have to devote yourself to the things that are working for you. I think some burnout is inevitable and even healthy because you have to keep yourself motivated and productive even on days when you don’t feel creative at all.

What would you do if you were not an artist?

That’s an interesting question. I would probably be a marine biologist. I love science and I love the ocean. It was the first thing I wanted to be as a little kid.

What can we wish for you in the future?

Wish that we can all return to the stage to see performances in person again, and be able to meet people and mingle. I miss live music so much. I realize there are drive-in shows and we’re all doing live streams, but I’m excited to be in an environment where we can all lose our minds a little it together again.