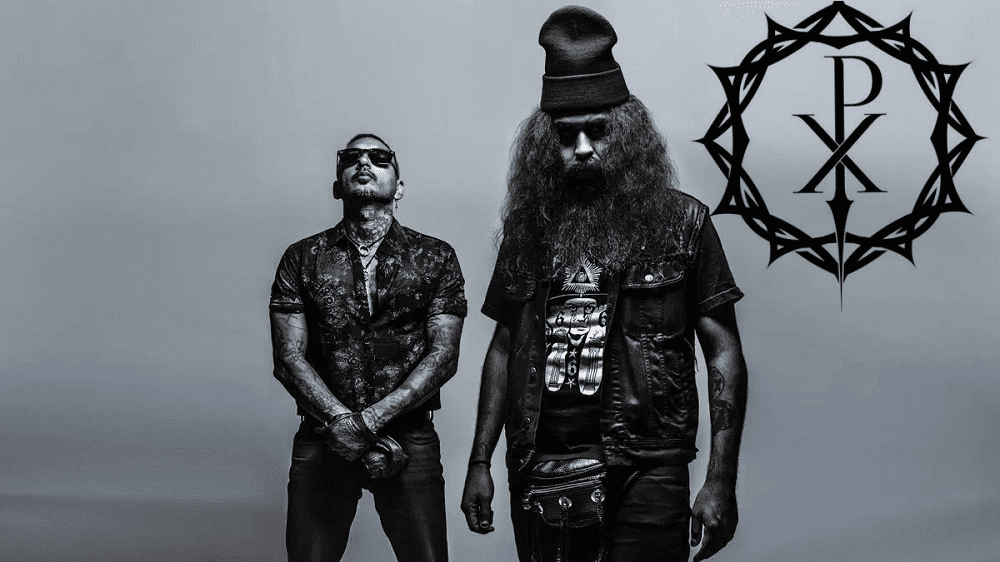 Less self-centered than solo performers, more intimate than a mere “band,” musical duos embody a special something. Sometimes that announces itself through a subtle yin-yang of two halves creating a whole. These dark 4 duos have transformed the Los Angeles scene and created sounds that are theirs alone. Because, as one memorable duo (Marvin Gaye and Kim Weston) state: It takes two.

It’s been years since Mötley Crüe’s Shout at the Devil came out: it was 1983, amidst the glory days of Heavy Metal.

Now, a good thirty-five years later, the ‘city of angels’ could finally see a Dark Music revival through a series of power duos, due to the swift rise of four dark and diverse music projects.

With their innovative genres ranging from raw industrial, Hip-Hop/Goth, 70’s Satanism to Electronic Black Metal and a great deal of attention to their live shows, with mesmerizing light plays or controversial blood rituals, these acts are nourishing an unprecedented underground movement in the music scene in Los Angeles.

Youth Code is a duo made up of raw, punishing, industrious electronics built from the seeds of hardcore and early Wax Trax. Ryan William George and Sara Taylor from Los Angeles, California, United States blend chaos with catchy dance undertones to create a sonic fury paralleled to none. Not an evil band par say but they are frantic, brutal and are one of my favorite bands in all of Los Angeles.

Everybody knows that the Devil has all the best tunes. From Robert Johnson selling his soul at the crossroads to the blood-soaked black metal of Norway, Satan has long loomed large over the music world, striking fear into the hearts of the sanctimonious. But nothing that has gone before will prepare you for the arrival of Twin Temple: Los Angeles’ one and only purveyors of Satanic Doo-Wop. Twin Temple is fun live and they really bring you back to the satanic 70’s.

Prayers is an electronic rock duo founded in 2013 by Rafael Reyes and Dave Parley. Prayers are the first musicians/artists to use the term Cholo goth to define their genre of music which lyrically explores the harsh realities of gang and street life over throbbing beats and swirling synthesizers. For a duo, they have a mesmerizing live show and captivate audiences with a brand new innovative form of goth music. The upside-down crosses reign in their live shows.

If the moon is the female Satan, Twin Temple is the bright side of the Moon where LUNA13 is the dark side. Hailed as “the bass music scene’s Slayer,” dark lord duo LUNA13’s forceful Black/Bass/Metal style incorporates elements of electronica and black metal with the ability to cross over from electronica to metal without using any guitars. Dr. Luna, the duo’s demented musical maestro creates the voluminous sound solely with synthesizers and distortion pedals by wrapping heavy distortion around the sub-bass. Frontwoman Lilith Bathory brings the spectacle with brutal vocals and trance-inducing dance moves behind her devil horns. I saw LUNA13 open for ICP at the Regent and was blown away by their sound. They are evil yet beautiful to see live.

Get to know Steve Marinangeli
Apostola: Ending the Year with ‘Christmas Smiles’
Advertisement