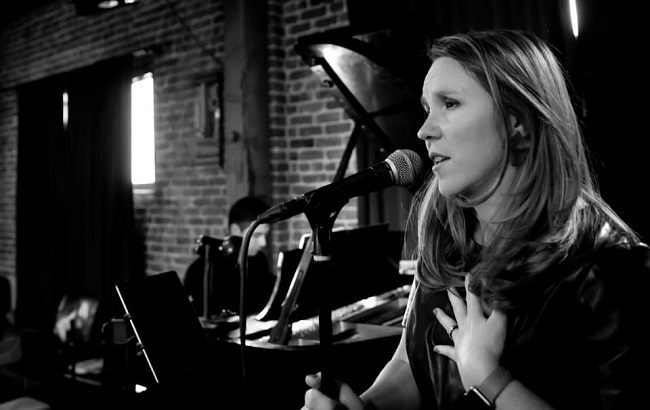 Virginie Marine is a vocal pop singer-songwriter that has toured the world performing with passion and emotion. She has been praised by the industry as one of the most exceptional voices of her time. In 2014, she released her first solo album – “Sur la pointe des coeurs” (“on the fingertips of your hearts”) – on which she has collaborated with the most respected french-speaking artists among which are Richard Sanderson, Thierry Sforza, Rick Allison. Shortly after the release, Virginie moved with her husband to California, to promote her music to a larger audience.

After giving birth to her wonderful daughter called Melody, she started writing again, this time with her husband and pianist Charles Holive. They both wanted to capture their chemistry on an EP called “My One”, that they recorded in the purest fashion of his piano and her voice to let the magic operate. It will be the opportunity for Virginie’s International fan base to discover 5 new songs, all of them written with love and passion: My One, Something I believe In, We are all the same, Stronger than ever and Don’t want to say goodbye, that last one as a single already awarded by west coast songwriter, and cherished on youtube with 10’s of thousands of views.

Her inspirations are Whitney Houston, Barbra Streisand, Celine Dion, Mariah Carrey. Every Sunday, 10 am Pacific time, she shares a very special moment with her facebook and Instagram followers, performing for 100’s of people live, a couple of covers.

I was born in Belgium and was raised in a city in the south of France called Nîmes. I currently live in California, San Francisco East Bay.

I have always had music by my side. I won my first radio contests when I was 7 singing a Whitney Houston cover. Started by touring with a band for about 10 years, and then got the opportunity to move to Paris to start my solo career, and work on my first album. While I had many jobs in parallel, Music has been the main driver of life.

I think the past 5 years have allowed some renewal on the music scene with artists that are not just coming out because they did a nice cover of 20-30-year-old songs, or over advertised through a talent-show. I believe the generations of Billie Elish, Lewis Capaldi, Ariana Grande, Sia is adding a lot to the mainstream Justin Timberlake.

I also sense a come back for beautiful melodies with inspirational artists like Lady Gaga in the “star is born”. And I must say this is exciting for me, as my identity is a modern version of Whitney Houston, great melodies, great texts, and voice.

I would love to collaborate with Justin Timberlake, Lewis Capaldi,  Dream Theater, Sia or Lady Gaga

Being more recent to the US music industry, I believe having a major with me would be a plus in accelerating my career and enabling me to perform to a larger audience

I am currently promoting my EP called “My One” that I wrote with my husband. I continue writing, and working on various collaborations for movies.

People can find me performing live every Sunday at 1 pm EST on facebook and Instagram -> all details can be found here: https://virginiemarine.com