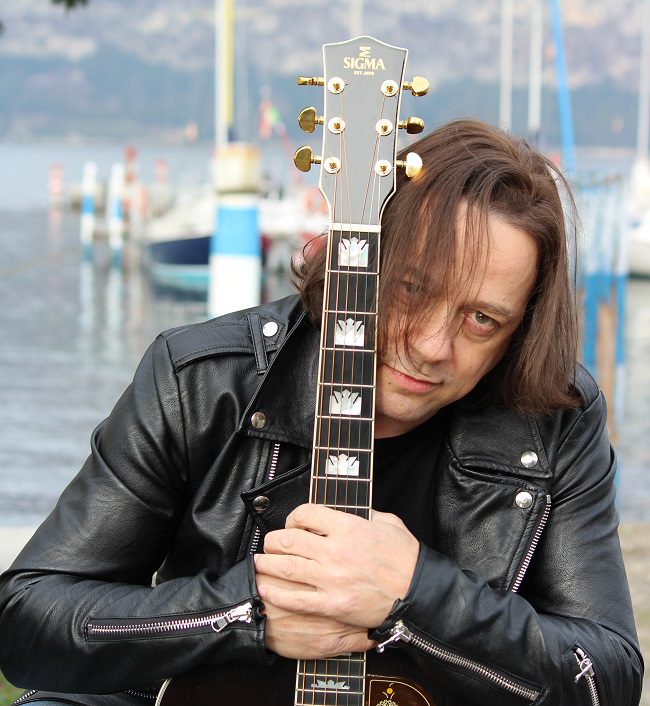 With everyone dealing with their own struggles on various levels, Lorenzo Gabanizza wanted to showcase not only love with his new single, “Straight To The Heart,” but also deliver a sense of hope and strength to those in need. The new single comes from his upcoming album, ‘Out of Darkness,’ and is available now.

Lorenzo Gabanizza has battled demons in his life. From overcoming sexual abuse as a child to facing the reality of depression as he got older, this pop artist could have let the negatives take him down but he fought back with music in hand.

A lifelong appreciation for music in many ways saved him as he played through the pain and eventually fought his way to where he is today – a well-respected musician who has worked with some of the best out there. That includes Max Gabanizza, Robby Pellati, and Luca Marcìas.

As a solo Artist, choosing sincerity as a personal trademark, I use my own name and surname: Lorenzo Gabanizza. There was a moment when I was younger and touring in Belgium, that I’d selected a pseudonym, but it didn’t last very long.

I am born with it. When I was 3 years old I already sang the hits of the time as Candida by Dawn, Yellow river by Christie, Eloise by Barry Ryan, etc. Along with this, I realized I wanted to be a musician. Of course, the vocation had the limits of my young age, but the core was already there.

And growing up the thought “I want to be famous and do what Jeff Christie does and look like him”, became “I want to write my music and play it on stage,” which ended up to: “I want to be myself and show no more than who I am, being sincere and being of any help to others with my lyrics and poems and with my own life struggles.”

I mean, Art and inspiration are like a plant: they need to be fed every day to survive. Fed them with love, perseverance, honesty, resilience, commitment and will to learn.

Many indeed. First of all, Jeff Christie, the Yvor Novello recipient which wrote the forever golden hit YELLOW RIVER, among many other masterpieces. I literally jumped aboard the “music boat” because of him. I can mention as a “vocal coach” Barry Ryan: so many hours I spent rehearsing his two hits “love is love” and “Eloise”, covering my mouth with a pillow when I shouted too loud, so as not to disturb neighbors.

I have to add among my “teachers” Neil Diamond, Elvis Presley, Bob Dylan, Donovan, and Kate Bush. Also, Classical music that gave me depth in choosing how to make the production of a song – arranging a song, can bring to life or kill your song. That’s true for sure.

The classical artists who influenced my taste were Sibelius, Glinka, Pëtr Il’ič Čajkovskij, Smetana, Rachmaninov, Chopin… But there are many more, classical or not, as I consider the music scene as a great big Choir and each one of us, prominent or not, are part of it.

the forthcoming album is what we call in the business a “concept album”. It’s a story, the story of my life and my struggle with depression. Back in 2018 for me was a harsh personal moment, full of problems, of old ghosts arising in my sleepless nights.

I had to face a breaking point in each and every aspect of my life. This is what I wanted to describe with my musical novel, and as far as I was trying and getting to reach the light outside the darkness, after all, this light was also made inside the pool of my darkness, therefore I chose the double-meaning title “OUT OF DARKNESS”.

It’s a very particular album. Each song it’s a chapter. There are no “black spaces” among the tracks, each song indeed flows inside a cinematic instrumental stanza which depicts the forthcoming scene.

Oh, gosh, no. I am aware that some people may think that way about themselves, this is not my case. Music, art in general, is not a competition, it’s indeed brotherhood. How could it be otherwise when the personal taste is involved?

Of course, completing my album “Out of darkness”. But I won’t enjoy the fruits of it, as I am already working on a new album, featuring a song dedicated to Sept. 11th victims and families. Of course, we are planning one Tour in the States and Europe, when the album is out. By now I am hard to find guy. I am sheltered on my cave, working… lol

Another quote, this time of my own, says: “The artist performs, his audience build the success”. So I want to thank first of all of my fans worldwide which follows me and sends love and support every day. I would also like to thank my label Italian Way Music for their outstanding support.

You know, I mean, Everyone is part of all this, I don’t see it as personal work, but as a full collective working machine till its more in-depth and hided little gears. Therefore, let me thank the pizzeria EUROPIZZA in the little Italian village called Colzate, for providing me amazing pizzas when I ran out of the Recording Studio.

And let me thank Mr. Don Tyler which with his mastering is making of my music something better – just think of the names he credits… I am proud and honored to work with him. Thanks also to the engineer Stefano Bedini and to my musicians which are more than a professional crew: they are friends and family: Max Gabanizza (bass) Robby Pellati (drums) Luca Marcìas (lead guitar).

I also want to thank actress Martina Sacchetti for having beautifully starred with me in the video clips of my latest single “straight to the heart” and director Oscar Serio for his sensitive professional touch.

I am not hard to find on the net. Just type my name and surname, you will find me. For the lazy people, here links to my official channels:

Don’t think too much to the top, think to the step you are doing to get up there. Don’t ever get frustrated by being ignored by Majors…they are very busy guys. Be honest with yourself, and with others, and, as my late friend Vic Elmes said once to me, “Don’t give up boy, push push push,”.