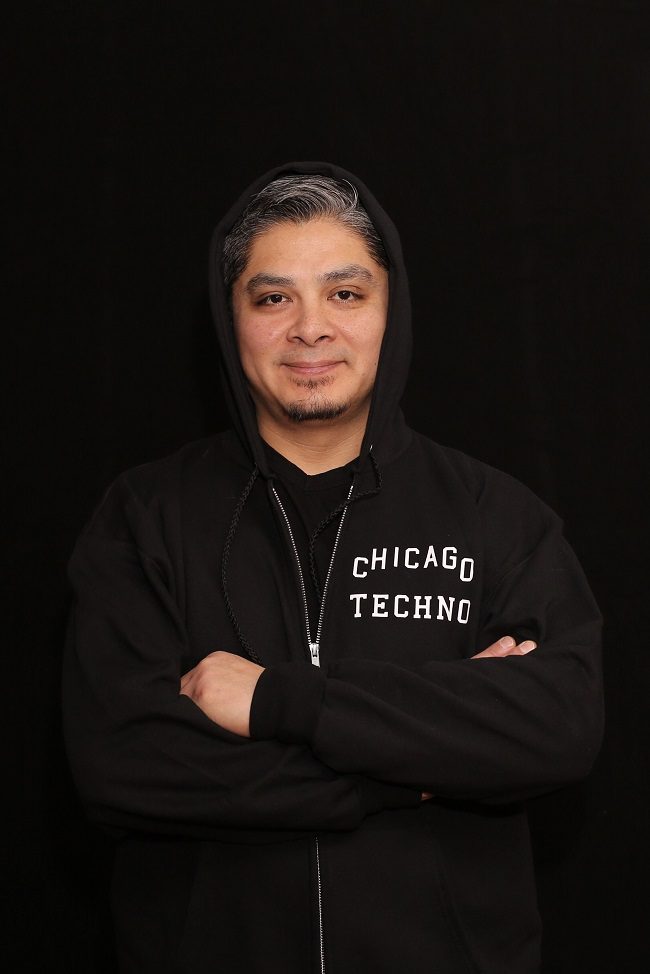 AFTR (Alone for the Ride) Producer/DJ from Chicago’s south side. AFTR started as a local DJ in the late 90s as DRAC spinning House, Retro New Wave/Industrial. In 2015 he joins Source1 to create AAR (Attack All Robots) b2b team. Focusing on bringing a unique sound to the crowd at undergrounds and festivals. After taking a short break from the Dj scene he came back reinventing his style as AFTR, producing Techno and Tech House.

AFTR also has a residency on Chitown Techno Radio called Tech(No Sleep) Thursday, past shows can be found on his SoundCloud page a monthly residency at EXIT and have also had guest spots on CueBass-FM (Germany), Influx Radio (UK), BP&J PodCast (Chicago), Bringing The Club To You and EDM Revamped.

Hmmm. I don’t know. I think I’ve always had a love for music. I remember waking up on Sunday mornings to my mother dancing to a disco. I remember my dad listening to tropical music, and those moments brought me a lot of joy.

When my youngest son was 12 years, he decided he wanted to learn how to use Ableton. So we learned together. Once I began learning, I didn’t actually consider it to be a career option until I submitted my first EP and it got signed.

Maybe 2 years ago when I finally sat down and finished my first EP. I didn’t think it was going to get signed, and when it did, that’s when I started to take my music career seriously.

How did you become a DJ?

One of my friend’s mothers bought him a pair of Technics when we were 14 and we learned how to play on vinyl.

Tell us a little bit about your styles and to what do you accredit your sense of style?

When I started producing, before my AFTR project, my style was more House influenced. I was heavily influenced by underground producers such as Vince Melo, Ed Nine, and Paul Johnson.

When I began to produce as AFTR, which is my current project, I fell into a dark/techno sound. This sound is more influenced by Adam Beyer, 999999999, and the deeper progressive productions of Deadmau5 & his I_o project. When I do Tech House as a side project I find myself to be influenced by producers like Will Clarke and Chris Lake.

And why techno and not House? I enjoy both, but I decided to go the techno route over the house route with my AFTR projects because I was ready to go with something different. Chicago is the city of house music and I wanted to try a new approach instead of doing what has already been done here.

Tell us about that project?

I’m ready to be rediscovered as a newer version of myself. One of my old aliases was DRAC, and I used to be known for playing Old School House, FreeStyle, Chicago House, New Wave, and Industrial. So, I knew it was time for a change, and I came up with “Alone For The Ride” as my new dark/techno project.

And tell us about May your new EP coming out on Wake Up! Music.

This is my EP side project of funky Tech House/ with a little Techno influence.

We also see that you are constantly creating. Tell us what else you have going on.

Mostly just new music and more new music. I am always working on multiple tracks and collaborations at once.

Would you prefer to be independent or signed to a major label?

At the moment independent. Perhaps some day I would consider being signed to a major label if I felt it were the perfect fit and offered me greater opportunities to expand internationally.

I love it. There’s so much new music, and so many young, talented and new producers.

I grew up listening to Chicago House. But, there was a ton of Alternative and Industrial music that I grew up on that absolutely influences the Techno music I produce today.

I think so far it has been being able to be signed to so many great labels. I am hoping that I have a great opportunity / big break in my near future because I have been anticipating something of the sort since I began producing.

I think one of my personal challenges is getting the first 4×4 moving. Once I get that perfect kick and drum, the rest begins to flow, which is a huge attribute. It doesn’t stop until I have a full structure.

Who would you want to work with on a project? And why?

I would love to work with Julian Jewel. I really love and respect his style and the way he structures his productions.

I would like to leave a feeling of joy or positive energy behind once they hear one of my productions. Whichever form that may be. I’m hoping people will be able to say I have good intentions, even when my music is dark.

At the moment I am pretty excited about the state of the music industry as a whole and think that we are collectively moving in the right direction.

I’m an automotive technician and I like to build engines.

I love spending time with my kids.

I think my image is that of a real – down to earth guy making techno music. I enjoy my image to come off natural and easy to relate to because that’s who I am in the world. I think people look for that more than you think.

Right now, I am finishing up a couple of different techno tracks that are collaborative with some respected Chicago producers.

Tell us about working with Pepper Gomez and Wake Up! Music on your coming release?

She is a great label owner and a fantastic vocalist. She has been making the process extremely easy and fun. I really have enjoyed being a part of this with her.

What made you choose Wake Up! Music as your label?

I heard great things about this label. It has many great artists signed to it, and I wanted to be a part.

My goal was to have at least one track out in the world. Since I’ve reached that, I would love it if one of my tracks got big enough to feel internationally recognized on a higher level.

Keep on keeping on, keep trying, keep practicing. Keep working to get better.

Meztheprod : The Aechelon Mogul
Miami based Rising Star ZZZ talks about his sense of style, greatest challenges and more
Advertisement