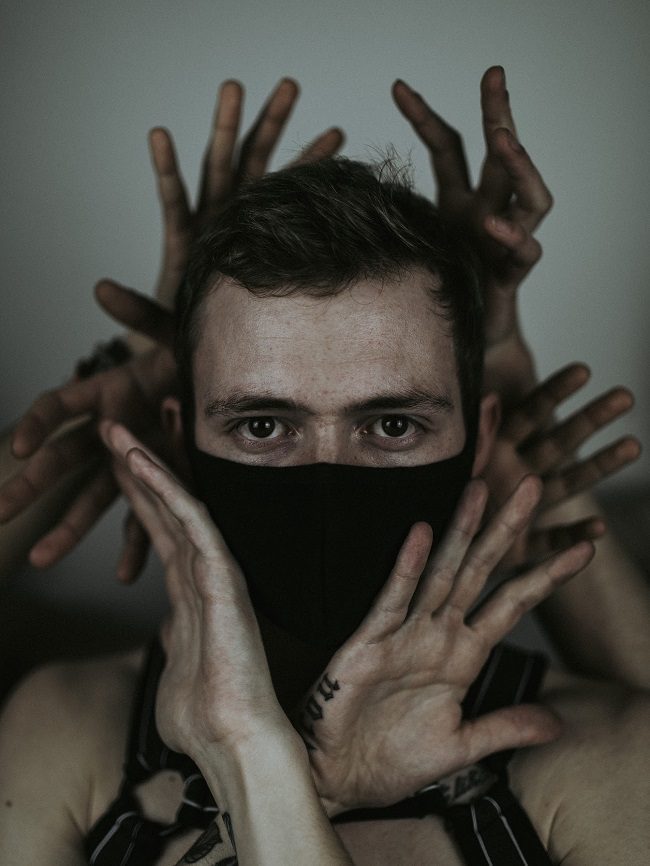 I was always in love with music. There was never a time when I didn’t want to make music. I was 4 years old, telling my mom that I wanted to be a rockstar, and that’s never changed.

After being discouraged from pursuing music by a mentor, I briefly attended college but quickly realized that a career outside of the music industry would never fulfill me.

And what is a life void of purpose? I’d rather live poor and in pursuit of my purpose than rich and void of meaning. So ever since that realization, I’ve continued to want nothing more than to make music with my life.

My sense of style is always evolving, but I think my current look draws inspiration from my classic rock roots, my fascination with bad boys, and my love for gaudy jewelry and overall showmanship.

That being said, I am fairly in touch with my feminine side, so I try to accentuate that when I can. My favorite outfit at the moment is some variation of skin-tight black leather jeans, a black t-shirt, a short-sleeve button-up shirt, and either a denim or leather jacket.

Accompanied by an extravagant amount of necklaces and chains and more rings than I have fingers, of course.

The songs I write more-often-than-not begin in a place of self-therapy for me. Meaning, I’ll be experiencing an emotion or a situation that is causing me some form of mental incapacity, and in order to process what I’m feeling and move ahead.

I begin to write a song that gives words to the emotions I’m struggling to comprehend. Once I’ve done that, I can understand what I’m feeling and move forward.

Renegade at first glance is just a song about sex. But for me, it’s the way I processed a slightly confusing experience. It’s about having a short amount of time with a boy I really liked. Therefore, I rebelled against the standard timeline of love and tried to fit as much of a standard relationship as I could into a short weekend.

When I wrote the outro with S!ege, we discovered a mutual love for religious language, especially in the context of secular art. S!ege offered the first lyric of the outro, “You make a saint a criminal,” and I loved it so much that we ran with that imagery for the rest of the song.

I come from a very conservative, religious background, where I faced a lot of backlash upon coming out, so reclaiming religious imagery and applying it to my current life is very redemptive for me.

I would say that one of my greatest challenges is the insecurity and self-doubt I’ve had to deal with. I was often led to believe that dreams are just dreams and that I should follow a career path that would guarantee me success.

Upon leaving my church where I led worship at for most of my teens, I was told that I would never make a career of music outside of being a worship leader. That specific conversation really shook my resolve and is why I decided to go to college briefly.

That being said, I’ve spent a lot of time recently facing those insecurities, and with the incredible team I’m working beside, I’ve gained a lot of confidence.

Another big challenge I’ve faced is that I wasn’t born very naturally musical. I’ve been singing since I could talk and started learning how to play my first instrument when I was 11, but it never came easy, and I was never all that good.

However, music remained the only thing I was passionate about, so I continued working on my craft in the hope that I could one day use music to make a difference.

I’d say my greatest asset is my unwavering belief that I was made to create music. Therefore, I live and breathe art. I consume it constantly and am always scheming my next creative idea. It is because I’m terrified of a career void of music that I work so hard to make this a reality.

Oh, absolutely not, nor would I want to be. If I was the best at what I do, I think I’d get complacent. I’d get comfortable on top and begin to get lazy, no longer dedicating all my energy to improving. Staticity scares me. I need to always be working on being better.

That being said, although I’m definitely not the best in my field, nobody else can do what I do. My experiences and background and every other little thing about me have put me in a place to do something no one else can do. The same goes for all of us.

We’re all so incredibly complex and unique that we bring something entirely unique to the table. I believe there’s a role that we were all made for, and I believe this is mine.

Tomorrow, I’m going into the studio to record my second single. It’s a song that’s very close to my heart, as I began to write it with the realization that I was no longer crippled at the thought of my ex.

Though music is my main focus at the moment, my team and I are also in the early stages of planning an apparel line, which I’m incredibly excited about. I also want to play my first tour in 2020, move to LA, and continue raising money for the Cascade AIDS Project, which is an incredible charity in the PNW.

I can be found on Insta at instagram.com/imchasewild and on Twitter at twitter.com/imchasewild, or on any music platform by searching “chase wild.” My website, chasewildmusic.com also has links to all my social media accounts, music, my text, and email club, and it has a contact form to get in touch with me for all booking and press inquiries.

I would definitely recommend listening to Grandson. He’s a huge musical influence for me and conveys massively important messages. Other artists that inspire me are Billie Eilish, Billy Idol, the 1975, twenty øne pilots, Matt Maeson, Evalyn, and Halsey. None of them sound quite like I do, but you can hear bits of their sound in most of the music I create.

Get to know Up and Coming Naples, Italy Based Band “AP Project.”
New Music Video-“Stress Relief” by 1Party
Advertisement