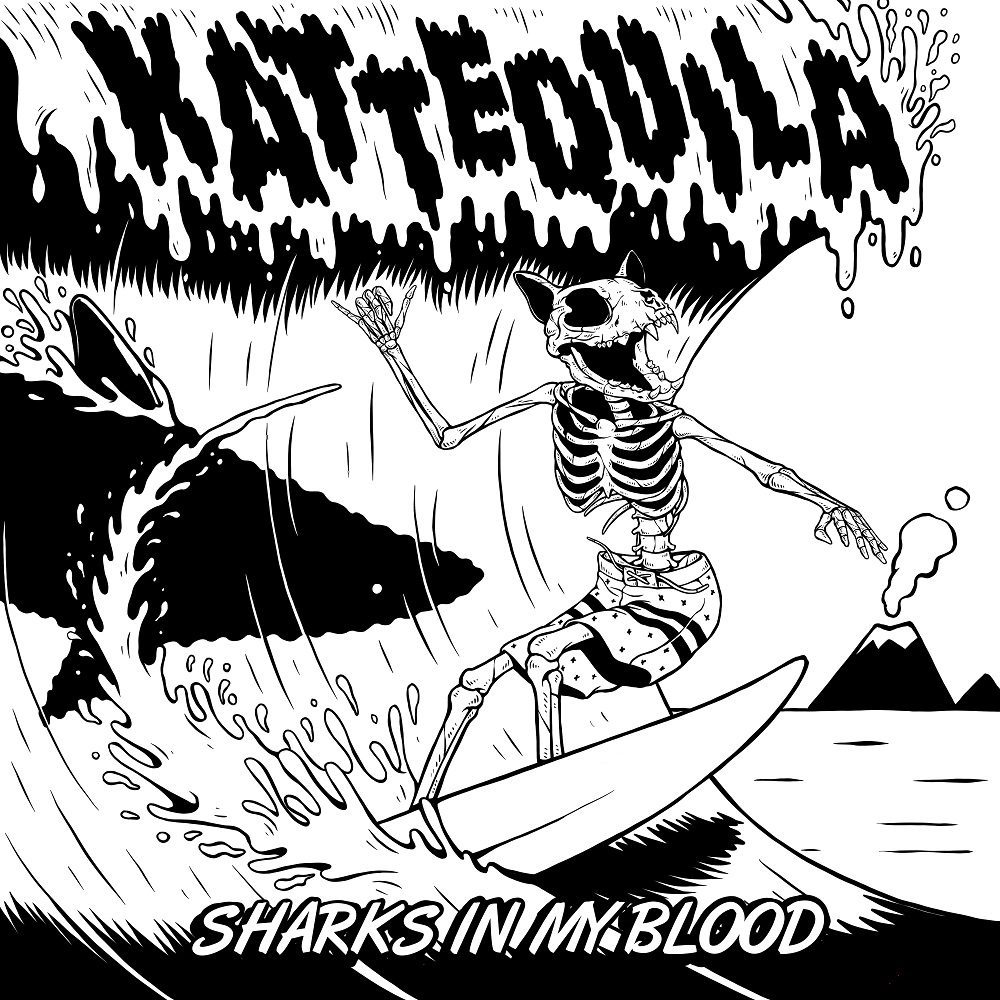 Kattequila is instrumental LoFi Surf Rock straight out of the Okinawa reefs Japan. The Music is a tribute and a soundtrack to all the fearless surfers who ride the roaring waves over deadly reefs or just smoking weed on the beach. They just released their debut EP Sharks in My Blood on the label Walkbay Productions.

Kon’ nichiwa and arigato for having us.

First of all. How did you come up with your band name Kattequila?

Kattequila is a combo and a wordplay with two of our favorite things in this world. Cats and Tequila. We just put them together and there you have it Kattequila.

You have just released your debut EP Sharks in My Blood. Tell us about it.

Sharks in My Blood is a 5 tracker and it was recorded live in Big Bubba Coral’s Surf Chack at Suicides Beach, Yonesu Okinawa this summer. We are very proud of it.

What kind of response  have you received from the release so far?

It has only been positive so far. People seem to like our LoFi 60’s sound. We play instrumental surf rock and that genre is not so big today if you compare with, for example, hip hop or pop music. We are also a pretty new band in the game and this is our debut EP so right now we are building a “surf bridge” to reach all the surf music fans out there.

What would you say defines your sound?

The sound is distinguished by heavy reverb-drenched electric guitars played to evoke the sound of crashing waves. Just like surf music first sounded back in the early 1960’s era. The Music is a tribute and a soundtrack to all the fearless surfers who ride the roaring waves over deadly reefs… Or just smoking weed on the beach. Hahaha.

You are based in Naha city, Okinawa Japan. What is it like to be a musician over there?

First of all, we are all surfers the music part comes second. Haha. But being a musician here is awesome. There are many local chacks and bars to gig at and to watch other great bands. Also, there is a rich cultural life here in Naha with very exciting art as well. It is a very good place to live, We love our city.

You are a four-piece band. Are all four of you born and raised in Naha City?

What are your biggest influences?

The waves of the ocean, surf and cats, we all really love cats…and Tequila.

We want to give a big shout to the whole Surf Rock community and all the awesome surf bands around the world for the inspiration they give us daily. We love you. And of course to all the surfers out there. Never stop looking for that perfect wave. AKAW !!!

Finally, what are your plans for the near future? Any tours or shows coming up?

Right now we’ll just take it easy and celebrate the release of our EP. Later this year, there will hopefully be a USA tour if COVID 19 calms down a bit at some point. We want to go to California the real home of surf music. So if any band booker in California reading this, give us a call. But right now we are just going to chill, surf, and pet cats.