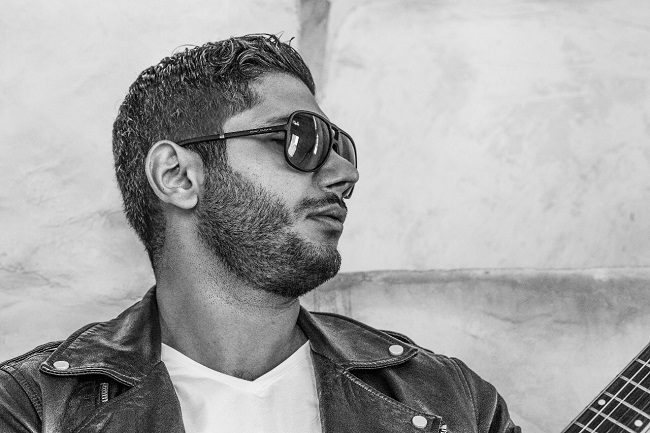 Johnny Bassadi, is a Syrian-Canadian songwriter, singer and musician based in Dubai, UAE.
Growing up, Johnny was surrounded by music, his father, a former singer, and a family dotted with musicians and music lovers. Bassadi began his musical journey at the age of 12 playing drums in a band formed with his classmates.
During that period, Johnny’s father bought him his first electric guitar. Allocating a major portion of his free time to music, his self-taught skills on both drums and guitar grew naturally. It wasn’t until late 2006 that he learned of his aptitude for songwriting and hasn’t stopped making music since, bringing us to his first release.
The debut EP, Runnin, features new songs, and songs selected from his vast arsenal of previous works. With main influences extending across the spectrum of pop and rock genres from all eras, he combines his life experiences and deep-rooted passion for music to forge his own identity and unique sound. Released on March 23rd, 2019, the EP features Johnny on the vocals, guitars, and bass, with the lyrical themes acting as the soundtrack to life’s milestone moments.

Growing up I was always surrounded by music. My dad used to be a singer in his university days and always sings around the house. My late uncle was a talented keyboardist and I used to watch him play with awe when I was little. However, my musicianship started at the age of 12 when my best friends and I decided to start a band.

I called dibs on drums and we spent every weekend at my friend’s house jamming and making noise until it slowly turned into music. My dad at the time refusing to buy me my own drumset, bought me an electric guitar instead, and so I learned both drums and guitar simultaneously.

I didn’t figure out that I could write songs till around 2006 when I finally gave into my then girlfriend’s nagging to write her a song. Although my life has taken a more traditional route, getting a bachelors in Mechanical Engineering and working in corporate companies, making music was always my escape from reality. I have only recently decided to share my music with the world and I hope to continue to do so.

I am influenced as an artist, musician, and entertainer by numerous artists of different genres and eras. I grew up standing next to our TV and mimicking Michael Jackson’s every move while my parents would cheer on. Later air guitaring to bands like Metallica and Pearl Jam.

My father exposed me to the golden oldies of Tom Jones, Englebert Humperdinck, and the likes. My music, however, is a blend of everything and each song of mine has a different style I believe. I’ll leave it up to the listeners to categorize it the way they feel is right. The most important thing for me is to write lyrics with a meaning and a message and accompany them with catchy melodies and compositions.

Over the years from when I started writing and composing my own music, of course, my songwriting skills grew, and also my career in the corporate world did too which resulted in financial independence and the ability to finance my own musical projects.

Prior to the launch of my debut EP, runnin’, I had put out some of my music unprofessionally for fun under different names. However, when it came to Runnin’ I decided to finally do it right, which meant money needed to be spent. I met award-winning producer, Reiner Erlings, and we hit the studio and recorded the four songs.

Along with them I rebranded myself and made my own professional website and went ahead with the launch later. I also financed my own music video which will be coming out soon!

The greatest challenge is being a one-man band and team. I am the songwriter, the guitarist, the composer, the drummer, the vocalist, and the bassist. I am the social media content creator, the web developer, the graphic designer, the PR, etc.. Having to think about and do everything takes me away from what I enjoy doing most and that’s the songwriting itself. The greatest attribute I guess would be that I dream big and I have a huge vision for the future and that’s what gives me the drive to keep going.

Absolutely not. I hope to continue growing as a musician, songwriter, and artist until as long as I am able to. I can only hope that one day my music influences someone positively and is the best in their eyes. In the end, its the fans that make you.

To keep sharing my music with the world, to build a band, and start performing!

I’d like to thank my family and friends. The ones who listened to my music from the beginning and cheered me on even when I didn’t believe in myself. They know who they are.

They can find me on Instagram: @bassadi, Facebook: www.facebook.com/johnnybassadi, and of course on my website www.johnnybassadi.com where links to my music and social media profiles can be found. Runnin’ EP is launched on almost all digital music streaming and download sites, so go have a listen and don’t hesitate to reach out to me with your opinions!

Just do it and don’t worry about what people think. Keep developing your skills and play and sing your heart out. If you’ve got something to say, there will be someone out there willing to hear it. And if no one does at first, then try again, and again, and again. I’m still at the beginning of my journey but it’s only forward from here so come back to me with the same question sometime in the future and I’m sure I’ll have some more advice!