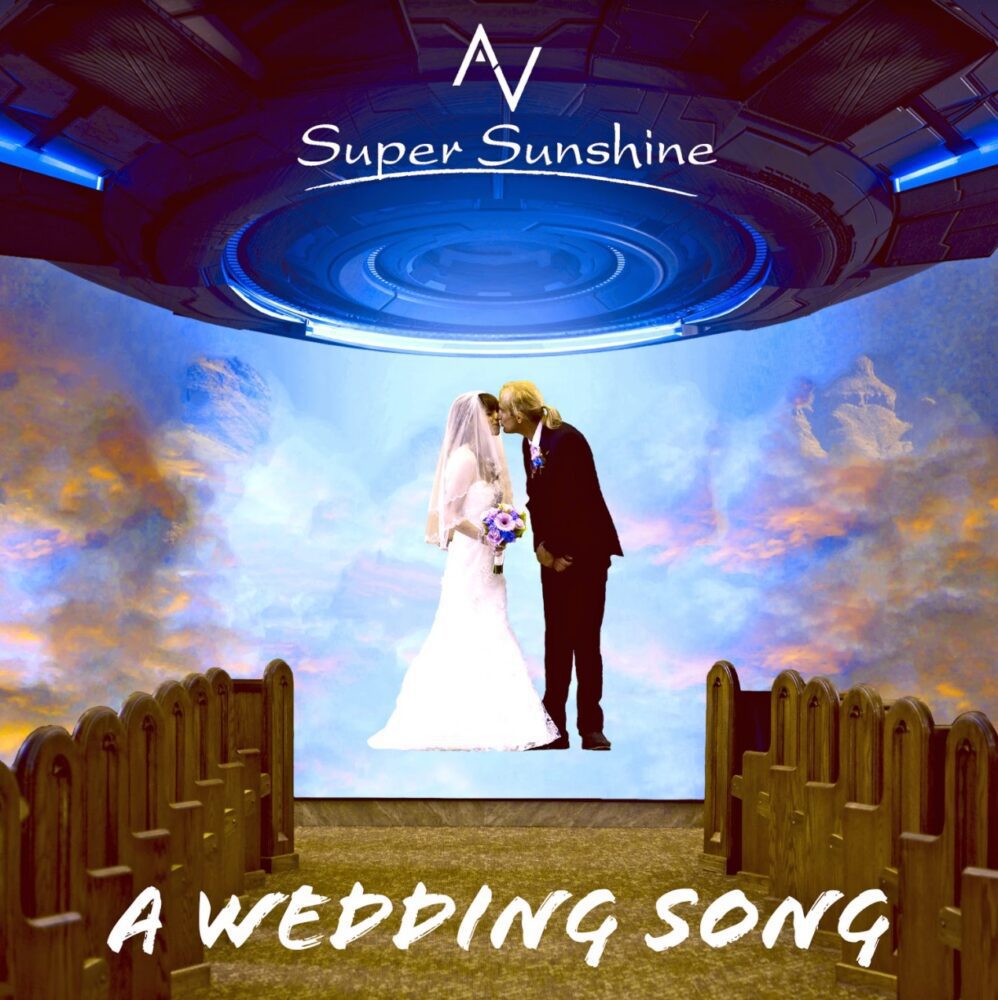 AV Super Sunshine released the music video, “Wedding Song,” at the beginning of April. Since its release, the song has captured the hearts and ears of romantics around the world.

With shimmering sparkles of color, along with frissons of ‘60s psychedelia, “Wedding Song” conjures up the delicious sound of The Beatles blended with The Byrds, as well as jangly hues of contemporary pop.

Written by AV for his wife, Philomena, to commemorate their first anniversary, “Wedding Song” expresses the essential feeling of love – and goes straight to the heart.

Directed by AV and Philomena, the video depicts the couple posing in front of a frozen Wisconsin lake, dressed in wedding attire. After AV walks out onto the frozen surface of the lake, the couple gets in their car and heads south towards Florida, filming as they roll through heavy traffic, cities, and intense rainstorms. Arriving in Florida, they immediately stroll to the beach, once again in their wedding attire.

Heartfelt, intimate, and full of optimism, “Wedding Song” encapsulates the thrill, sentiment, and significance of weddings – the consecration of love.

I was hosting an all ages open mic at a large coffee house in Oshkosh, Wisconsin, which allowed Philomena and I a chance to help many of the younger musicians and songwriters.  I used that time to also hone my songwriting skills.

We would invite the high school kids in who hung out at the park across the street and pack the room to as many as 100 kids.  I would start out with all the songs I was currently working on.  I would listen to the audience and if in any part of any song I heard talking, I knew that part needed to be improved.  I would rewrite those sections and try them again the next week.  Once a new song could keep the room’s attention for its entire duration, I would consider it done and introduce a new song being written into my weekly mix.  Before long I had several albums worth of material.

What’s the story behind the name AV Super Sunshine?

What inspired your single/music video “A Wedding Song?”

Philomena and I were celebrating our first wedding anniversary and the gift theme was paper.  I’m not good at paper crafts so I decided to write her a song. We had reminisced during our first year of marriage about how much we enjoyed our wedding and how great it would be if we could relive it with friends and relatives. It’s a song that captures a joyous day and one for anyone who has or will experience the simple joy weddings bring.

For the video, we wanted to film outdoors with green foliage like the typical spring or summer wedding.  At the time it was winter.  After brainstorming, Philomena and I came up with the idea of a honeymoon at the beach, but only to find the water frozen and foliage bare.  Wanting to fulfill their dream our couple get in their car and head south until they find a warm beach, green foliage, and a warm breeze.  We spent 4 days driving and 2 days filming, and as a bonus, we also had a lot of alone time together.

I guess both Philomena and I directed the music video, depending upon who was running which camera.  It was shot primarily at our lake home in Fond du Lac, Wisconsin, and at St. Andrews State Park in Panama City Beach, Florida.  The driving scenes were shot on the drive along the way such as the Chicago Loop driving sequence.

First and foremost, I hope they are entertained.  If they get the stories and messages in my song lyrics, that’s even cooler.  If they are inspired to get up and dance, then I’m doing my job and more power to the people.

I like David Bowie’s artistry, Mick Jagger’s energy, and Johnny Cash’s honesty, but I grew up listening to a lot of classic and pop rock.

As an artist competing against the best songwriters in the world, I listen to music differently than if I was primarily a consumer of music.  When I listen to music it’s mainly to check out the songs my musical peers are charting around me to figure how I might fit in around them better.  Of the artists of whom I’m currently charting with on the global adult contemporary charts and global rock airplay charts, the ones I like include The Black Keys, Justin Bieber, Chance The Rapper, Ed Sheeran, Foo Fighters, Jonas Brothers, Lady Gaga, and Post Malone.

We have a film which stars Philomena and me which is showing at film festivals right now.  We’ve actually won several awards so I guess Philomena and I can add award-winning filmmakers and actors to our achievements.

That’s what I do.  That’s all I think about.  It’s how I communicate best.

Looking to the future, what’s next for AV Super Sunshine?

We’re having a really great ride at radio, picking up more and more stations with every new song.  My promoter told me he’s served out over 1900 radio station downloads so far and that radio really likes this song.  We’re going to be performing this song shortly on several national network television shows including CBS Saturdays, The Kelly Clarkson Show, and The Tamron Hall Show, and look forward to officially announcing the air dates.  There’re a few other exciting things in the works regarding national network television, as well. We’ll be launching a new single in July which we’re preparing for filming the music video for now so stay tuned.