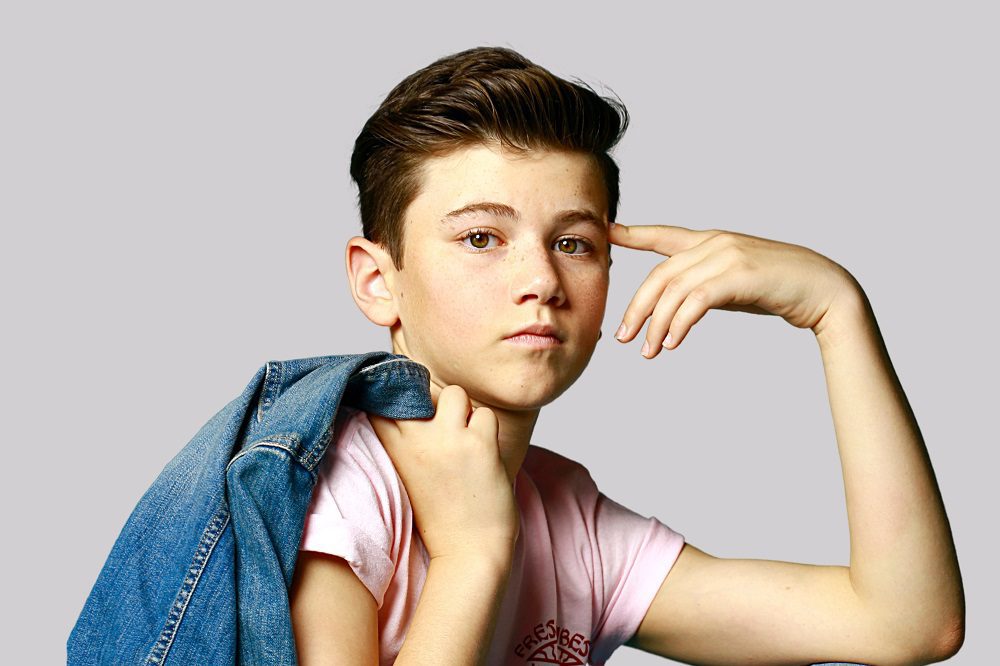 We had the pleasure of interviewing 13-year-old actor turned pop recording artist Alexander James (AJ) Rodriguez this week to find out more about his transition from acting to the recording booth, his upcoming song releases, and this emerging pop star.

How old were you when you first started acting?

I grew up in Marbella, Spain where the main business is a tourism and real estate, there weren’t that many options for acting, but I did a few print jobs as a toddler. However, it wasn’t until I moved to Los Angeles that people kept asking my mum if we were interested in acting. From around age 4-5, I had a manager that pitched me for print jobs.

I did a few Little Tikes commercials, one of which has had millions of views for a Giddy Up ‘n’ Go horse. When I turned 6 though, you can stay on set longer and that’s when the bigger youth agents asked me to audition. I was offered to sign with them all across the board. I was really lucky, my mum chose to sign with CESD Youth Talent, and they have been my agents ever since!

I have always loved performing and singing – it’s hard not to in our house. We are a family of entertainers. I love acting and booking a role in a movie or suchlike, there is nothing better than your agent calling you to let you know you’ve got the part – I jump around all over the place. I think that feeling is what I love the most and of course, being on the set surrounded by hundreds of creative people all making magic happen. I love being on set.

When did you transition into music?

I have been around music my entire life – I think I was 6 the first time I went to the Whiskey A-Go-Go on Sunset Boulevard for an all-ages concert. I always wanted to be up there with them on stage singing. Of course at elementary school, we did the school plays and I was in the school choir, where we performed in public at least twice a year, but my mum wanted to wait for my vocal cords to develop a bit more before starting singing lessons and learn the art of breath control. I went into the recording studio for the first time in May of this year. I am still acting but adding music to my portfolio of work.

I’ve been to so many music awards shows in Los Angeles for my mum’s work, always surrounded by musicians, mainly rock stars. I have sat on the side of the stage with ear protectors on too many a performance – I just love the electric guitar!

At home I listen to anything on the radio, we play mostly 80’s music in the car. I like to listen to Harry Styles and Post Malone in my earbuds, or even Journey and Talking Heads. When the soundtrack for ‘Spiderman: Into the Spider-Verse’ released, I listened to that non-stop, so you could say my music taste is very varied.

Your debut single, My Crew’ was produced by seasoned record producer, Laney Stewart. How did that relationship come about?

It’s incredible that I have released my first single, I pinch myself every day at how lucky I am to have these opportunities. We met Laney one day last year at Westlake Studios in West Hollywood. I was there with my mum for one of her clients, Tiana Kocher.

A conversation was started, and he asked to hear me sing a little. We played him an audition tape I did for ‘The Greatest Showman’ – I was singing Snow Patrol. I think he must have liked it, as a few months later he sent us three beats for us to work on!

We understand you recorded the three songs during lockdown in LA. Tell us a bit about that time in the studio?

Originally, we had the studio booked for Spring Break, April 6-8. The idea was one song recorded per day. Sadly, due to the COVID-19 pandemic, we had to push those dates which were rescheduled for May 11-13. Even then we only had the vocal producer and one of the writers on the record, Alex Jacke and our engineer, Blake Mares. That was it – me in the vocal booth and the two guys on the deck. We recorded ‘Your Smile’ first as it was the most complicated, then ‘My Crew’ and finally ‘Up To You’. I was 12 at the time.

We saw the lyric video up on YouTube as well as behind the scenes clips from the studio, you look like you had a lot of fun. Did you face any challenges?

Well, nothing ever runs smoothly or the way you’d like them to. I was still at school, a virtual public school with LAUSD and so I had to keep up with the day’s zoom lessons and projects. I had a Biology test on Wednesday which made me very nervous as well as a History zoom and English zoom – it made life in the vocal booth complicated and interesting. Between class, I was laying down the verses, and then we managed to record the chorus before we had to wrap. All the pickups were done on the last day. I was literally exhausted!

What impression would you like listeners to be left with after hearing your music?

I want people to hear my music and just relate to it and have fun. Each song has something people can vibe to from best friends to appreciating a girl’s smile to be the champion you’re meant to be. As I grow so will my music. We are already starting the next three songs so stay tuned!

Oh yes, please listen to ‘My Crew’ on a platform of choice: https://ffm.to/m56rmky

Thank you so much Muzique Magazine!