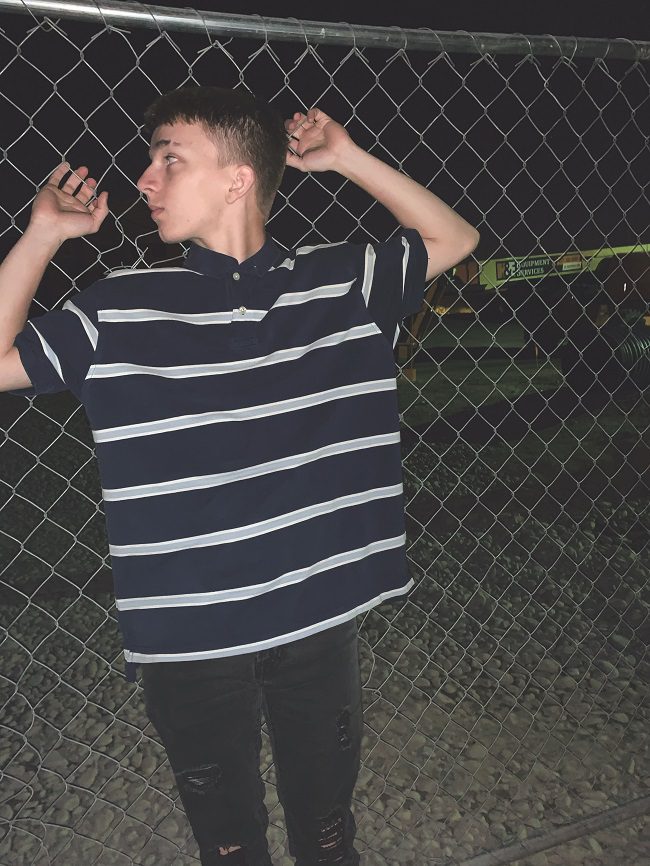 Well, I got the name from my favorite artist XXXTentacion. When I was around 15 years old I was watching a podcast he was on only a couple weeks after his release from jail and he mentioned where he came up with the name. He said that tentacion in the temptation in Latin, so I don’t know if you would consider this copying but I basically did the same but Yuwaku is Japanese for temptation. Once again I didn’t mean to “copy” him, I did it because he’s someone who inspired me to start making music.

I started writing raps around 5th grade. During this time when I was in elementary school I had gotten put into a “Gifted and Talented” class, it was supposed to be for the “smart kids” that think different or something like that, but anyways the most unique part about it was we didn’t have to do regular paperwork most of the time, we really got to do whatever we wanted. Finally, when it came to booking reports or character analysis our teacher told us we didn’t have to write a report as long as we come up with something unique to do for the assignment and check in with her to see if it was okay.

Growing up my dad was heavily into rap music and basically got me hooked on it so I had asked her if I could write a rap, at first she was very hesitant but I soon convinced her to let me. Around two weeks went by and it was time to present our projects, everyone else had made scrapbooks and stuff like that, then it was my turn, I just stood up there with nothing but a paper and read it off as best I could. Naturally, I stuttered and was very nervous, but after finishing it when I heard my classmates clap it brought me happiness I hadn’t really felt before. Obviously not everyone enjoyed it and some made fun of me or whatever, but that’s just a part of performing in front of people.

Basically, after 5th grade I started writing raps at home about stuff I had gone through or just what I thought people wanted to hear, and I did that all through middle school. In my 9th grade year, I had finally got the courage to record and publish a song to SoundCloud, I really had little to no expectations for it, but to my surprise, within a week it hit 100k views with lots of likes and comments. It started to become popular around the school and I became known as the “SoundCloud rapper”. After this happened I decided music is what I really love and continued to record and publish from then on.

Well, when it comes to my style of music it would have to be to all my favorite artists like; XXXTentacion, Lil Uzi Vert, Playboy Carti, Nas, Frank Ocean, The Neighbourhood, those are just the mainstream ones but basically anyone I listen to. The most influential on me would have to be X though, I loved his style of music and personality and kinda just adapted to it, all respect to him of course. When it comes to my dressing style, I would say I like to keep it basic, I don’t really credit anyone for it, just basic black or white tees and some ripped jeans with some air forces on, nice small gold chain. That’s basically it, I like to keep it simple.

Well, I don’t want to talk about this too much, but I do have a rap/hip-hop album I’ve been holding onto for a while, but I got a plan for it don’t worry. I’ve also been in the works making an alternative/acoustic album but that’s for a later date. I don’t really know him I come up with the projects, It’s mostly inspiration from other artists.

I haven’t really had too many challenges in the music world besides trying to be consistent and keeping my views up. Obviously I’ve had personally problem and challenges in life, but I don”t really like talking about stuff like that. Everyone has their struggle. When it comes to my work ethic though, I’m not going to lie I’m kinda lazy, but I’m also a perfectionist. I would rather not drop a song for 6 months and work on it till I believe it’s perfect instead of dropping songs that are mediocre every two weeks.

I don’t believe I’m the best, but I am proud of myself. I make music I can turn on when I’m by myself and genuinely enjoy it. One of my favorites would have to be Space Coupe I released a couple of weeks ago.

To be honest I don’t really know. I’m just going to keep making music till it gets noticed by bigger companies and see where I go from there. At this point, all I can really do is grind out songs and hope it gets the right attention.

Yeah for sure, the number one person would obviously be my mom cause she supported me and encouraged me through all of it, I’m very lucky to have someone like her on my side. Another would have to be Noctu, he was my buddy through all of it, he was basically my duo, there wasn’t any Yuwaku without Noctu.

We did make music together for a bit, but he stopped a while back and if any of you know of him (@xnoctux on insta) text him and let him know he needs to get back to it. My girlfriend would also have to be one of the people I thank, she’s also been there for me and encouraged me no matter how I felt.

The last ones would have to be some of my homies like; YWJ, Blaise, Gene (@g_flexz), Vertigo, Lil Hitta, Rebecca, Alius, Garza, Ahmed, David (my number one supporter), Marceno, Henry, Luke, Joey. Anyone in TTG I got love for, they the next big thing in the fighting. For all those I missed, I’m sorry y’all know who you are.

Most of my music is on SoundCloud, but I do have some on all platforms. Just look up Yuwaku on any platform and you’ll find me, the same goes for Instagram or Twitter. This has all the links to my social media – https://compiled.social/yuwaku

Just keep grinding no matter how discouraged you get, those who truly want it will get it.