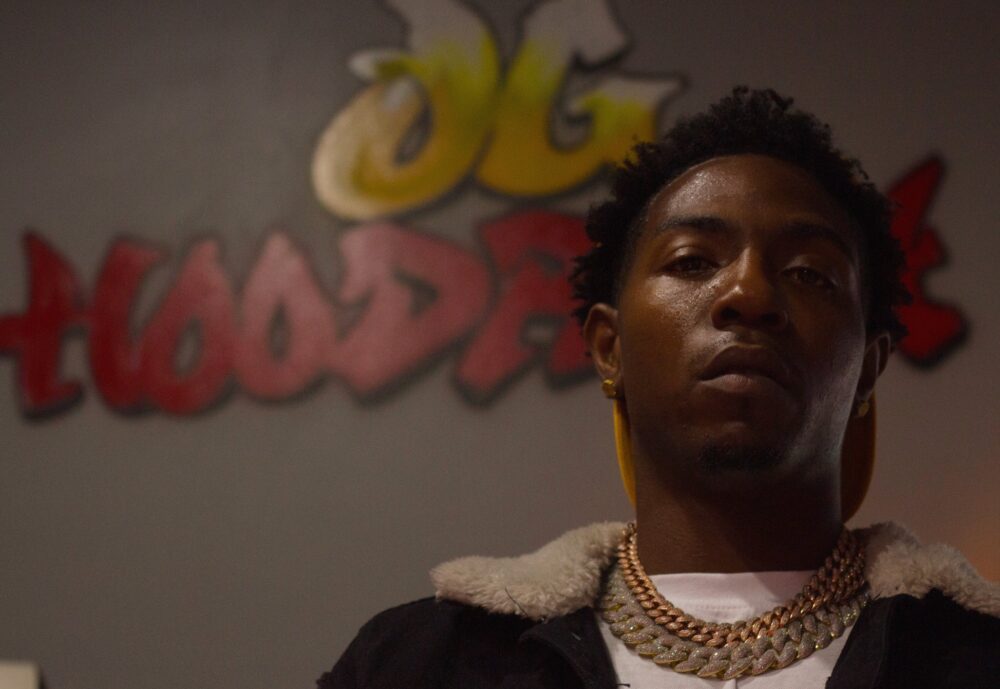 Growing up on the streets of Atlanta, Kam found himself surrounded by criminal activity. Intent on not succumbing to the sinister lure of the streets, Kam used music to forge his own way.

After graduating in 2010, Kam decided to focus on his music, developing his unique blend of trap and hip-hop. Releasing his debut album, From da Struggle to the Hustle, resulted in massive airplay, features on Coast 2 Coast mixtapes, and going viral on Soundcloud.

A product of Atlanta, there’s nothing fake about Kam. He’s been through the mill and is frank about his feelings, which is evident in the video for “Pain.”

The visuals open rolling past a cemetery, followed by Kam narrating his story while placing bouquets of flowers on headstones. Like Kam, the music and the rhymes express his commitment to the hustle and his faith.

Muzique had the opportunity to speak with Kam Dutchie and used the time to find out how he got started in music, his influences, his goals, and his inspiration.

The backstory of my music is F.S.T.H (From The Struggle To The Hustle). That’s a brand that’s my lifestyle; it’s a movement; it kept me going and taught me how to deal with everything I’ve been going through. Music was like an outlet for me to talk freely without any interruptions, opinionated mines, and it gave me a platform to speak my life through the culture with my music.

Which rappers influenced you the most?

When you say rappers, I’m influenced by artists, businessmen, pioneers, and guys that set standards in hip-hop, guys like OGs in the streets that did it before my time and that will teach you to do it the way in your time. Like Nipsey Hussle, Jay Z, 50 Cent, and T.I and Wayne, just a few to name right off the bat. It’s about paying respect and homage to the guys that came before.

I listen to Kam Dutchie, I also listen to a selective few artist like the ones I mentioned earlier. I’m inspired by them.

Five years prior, I took time off to perfect my craft, elevate my sound, and have a standard image. And what I mean by that is have an image that stands alone, so I worked on everything it takes to be an artist.

What is your songwriting process? Do the rhymes come first, or the music?

Well, when you say process it is a process because I want to give my mind a channel, where all it hears is the words coming from the beat, tempo, bass, and hi-hat, all the sounds and words it takes to complete a song. The music speaks through me, giving me the way to speak it, the sound that best fits for the beat, and the energy brings light to the music behind it, to give the fans a different feel for music.

What was the inspiration for your new single /music video “Pain?”

The single ‘Pain’ gives my struggle, my point of view of what ‘Pain’ could be, not only does it show a different side of me but also gives the fans a vision that everyone can see about how innocent lives are being used as an image. The video shows how artists before me, their lives were taken, and society needs to see how artists’ lives are so complex and their deaths have been broadcasted through social media as a mockery.

It’s nothing to take away, I want to build a culture that gives a vision of how society sees our community. To give a creative outlet for a platform that speaks through volume. This visual gives a raw approach on how Kam Dutchie sees hip-hop as a culture and where it’s going as a new era.

Where was the video filmed? Who directed the video?

Filmed in the streets of Atlanta, the Metropolitan area of the city; also places where Kam lived and hung out. Kam’s vision opened up the visual for the project. With creative ideas and strong imagination, the treatment relates towards the track ‘Pain.’ both an understanding of the artist and what the artist wants you to see and hear from the single and music video. Kam Dutchie’s vision, along with Christopher Evay (MegaVisuals), helped design a visual that completes the message from the artist with the single.

To continue to grind and work, perfecting my craft, elevating my sound, and give the fans and the hip-hop world a different look on artists today. Most importantly, continue to make great music with substance behind it, letting the world know of Kam Dutchie.