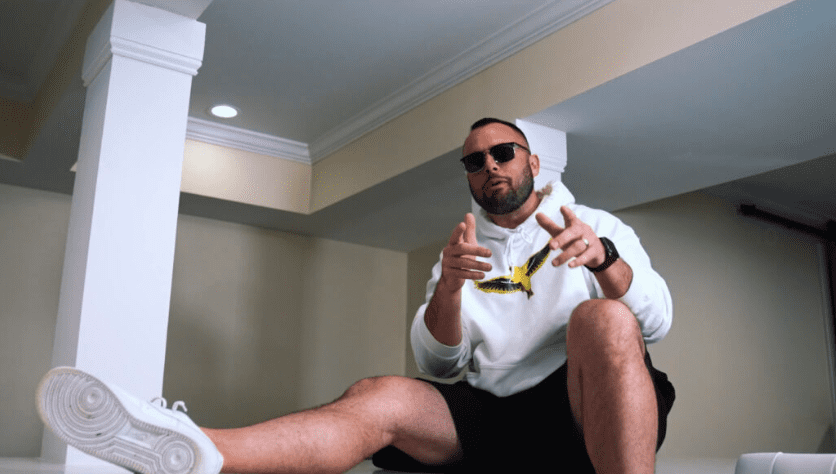 R&B singer Janay Saxon adds her deluxe voice to the mix, imbuing the tune with lush, creamy tones as the slow, low, and banging music rolls out. With his finessed flow, daFinchi lays it out, recounting the slog to make it.

Produced by Dillygotitbumpin & KXVI, the video shows clips of daFinchi back in the day, hanging with rap legends like T-Pain, Nipsey Hussle, and Nas, along with images of where hard work has brought him.

Muzique Magazine caught up with daFinchi to find out more about the inspiration for “Seeds,” how he connected with Janay Saxon, and his writing process.

I think someone asked me if I had a resume and then this beat came on and I started rapping. First, I called the song Hip Hop Journey, titled after my 2004 DVD that has a cameo in the music video.

‘Seeds’ has dual meaning referring to my daughter, my seed, and all the seeds planted in my life in my career, that have grown to gardens of flourishing past and present accomplishments. If you put your heart and work hard, those seeds can grow into gardens.

How did you come to connect with Janay Saxon?

We met at the Just Right Music Studios grand opening a few years back in Bridgeport, Connecticut and we started following each other through social media. She would post videos of her singing songs while playing the piano and she always had a very soulful beautiful voice. I had a reference with my voice on the chorus for ‘Seeds,’ but I had a divine inspiration to ask her to be on the record. I sent her the track and she vibed out with it, added her own element and amazing ambiance and ad-libs. No one could have done as good of a job as she did.

As you can see in some of my old clips of me interviewing and hanging out with all these big-time rappers and musicians like Lil Wayne, T Pain, Nipsey, and Ice Cube, I was in the game, but I was not making music. I grew up doing music in church and in the marching band with the tuba, but I didn’t start making music until 2010 about seven years after I was plugged into the music industry.

As far as music as an influence in my life: My parents had a record player. My uncle and aunt would play Chaka Khan and I used to breakdance in the kitchen singing to her my mom was a ballet dancer always having beautifully sounding ambient music. My father would play Roy Orbison in his pickup truck, and we would sing along. One of my mom’s friends, Joel, who was a DJ, would have all the music back in the day and we used to rewind the CDs and decipher the lyrics. I can vividly remember us doing it to Naughty by Nature’s OPP.

In all seriousness, I listen to so many more types of music now than in my teens and 20s. But I loved DMX, Nas, 50 Cent and now Post Malone, Rich the Kid, Trippie Redd’s ‘Exclamation Mark’ album.

Did your sound evolve naturally, or did you push it in a deliberate direction?

I started doing music 11 years ago and at first, I had all my songs written out in my phone and would just put them to any random beat, but eventually, I’ve come to let the beat take me to my lyrics. Now it’s more about catching the vibe and not forcing it. It’s a feeling thing. If I’m not feeling it, I’m not pushing it.

I try to mess around with beats of different genres like rock and old-school hip-hop and whatever else a beat can bring out of me. I listen to the newer artists for inspiration to see what’s new and fresh.

What inspires your writing?

My family, money, and all the happenings in the world along with my transformation and observations.

Do you draw inspiration from poems, music, TV, or other media?

You never know when and where inspiration will come from. I love all type of music, so that is definitely inspirational to hear different sounds and how different artists layer their vocals. I’ve been watching a lot less TV and movies over the last couple of years since the pandemic turned the world upside down.

Depending on the song, this nonsense in politics and the media propaganda has inspired some songs with themes of individual freedoms, the Constitution, and critical thinking.

I write my lyrics down probably less than half the time now. It’s usually based on a vibe that I catch with a beat. In my home studio, when I cycle through beats, and I find one I like, I just throw it into Logic and start flowing and line by line, I create either the verse first or the hook. On ‘Seeds,’ I had the first verse done quick. The second verse took almost a month of trial and error. I tried not forcing it, but I knew I had to get it done because it was a good song. It was kind of frustrating at times. And on this song, I came up with the chorus last. Some songs like The Burbs, I had the chorus done first.

What can your fans expect from you over the next six months?

The ‘DaFinchi Code Vol. 1.’ Songs about transformation, evolution, independence, freedom, and the chasing of success.

Also, I’m working on more collaborations and possibly signing an artist to my label Cut Muzik.