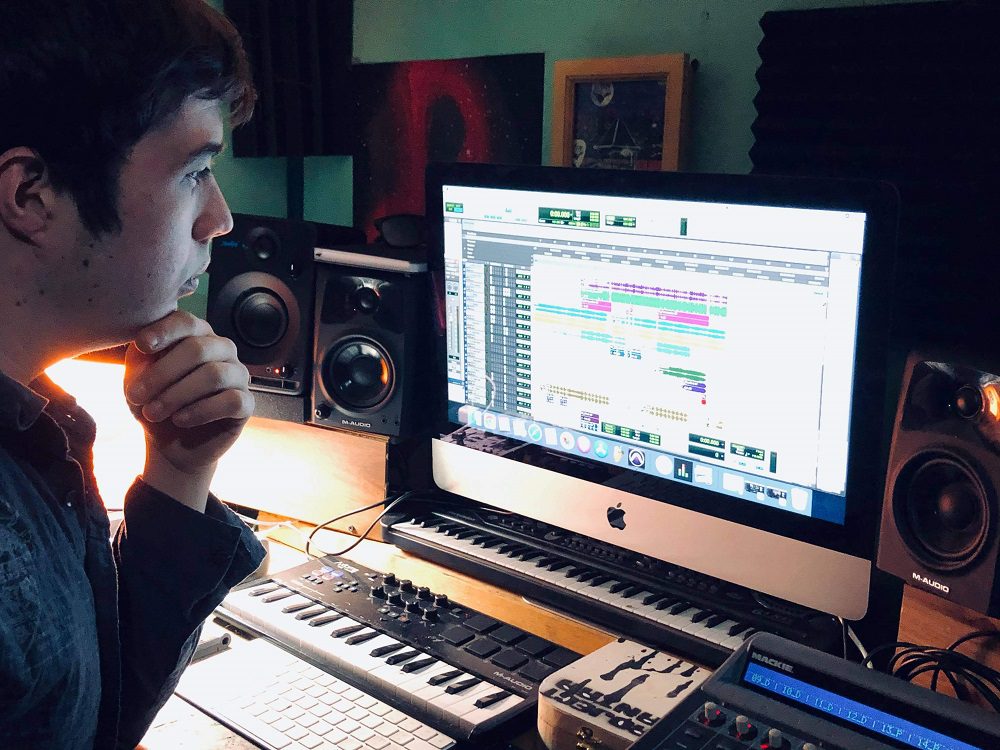 Well, my recording studio that I had previously established in another town from where it is located currently, we went through 2 name changes. Originally we went by Finesse Music Studios which ideally was meant to be a learning and recording type of operation while I was also giving guitar lessons from out of my home at that time.

When I had eventually moved the studio back towards my home area I had been recording this band I soon would join during that period of time. Eventually, we ended up changing the name of the studio to “The Ghost Note Studio’s” we realized perhaps starting our own label so we can distribute our music on a larger scale would be ideal.

Eventually fusing Ghost note studios with our current official Label “Soul Spectre Records”. I guess we just figured it suited and went along with the whole “Ghost/Spirit theme” of our recording facility’s name.

Well my love for music in general, had definitely started to develop at a young age for sure. As far back as I could remember into my early childhood years, I had been exposed to a lot of the 90’s mainstream music circulating around on the radio stations at that time. Mostly I recall listening to a lot of Metallica and bands heavier bands along with those genres. But to be honest, I liked any music really as long as it sounded good. Usually, my interest revolved around the heavier metal/alternative rock genres. Even though my high school years, I had a wide variety of music I’d bounce back and forth from.

I had admired a lot of hip hop throughout high school especially the old school stuff. But truly, I always had heavier rock and metal embedded in my soul which I’d have to say initially sparked my interest in music. All in all, this led up to me eventually picking up a guitar when I was approximately 16 years of age. After high school, I remember Originally setting out in a career in computers and had gained a lot of experience in the digital world, which I guess contributed to my basic understanding and knowledge of working with Digital Audio Workstations that I currently work with today. I don’t know, to be honest, I think I made the choice to pursue a career In music around the age of 20.

I remember playing and touring with and for the various acts in the Canadian music scene. I remember just wanting to play shows and would hop on with any band or solo act needing a hired guitarist. Anyway long story short. I really found a love in audio engineering around 2018. Which is currently my main occupation. I took all of my knowledge and love for music, computers & business that I had developed over the years and applied it towards a career in audio engineering then eventually alongside with an interest in artist development.

I would definitely have to give credit to all the amazing talents and fellow artists I have either had the privilege of sharing a stage with or had met through networking in the Canadian music scene. I feel without those individuals my style would be in a completely different direction. It is a safe bet to say I’d probably never had started producing and engineering hip hop or even had thought of becoming an audio engineer.

Originally, I had met someone through a very good friend of mine a couple of years ago. This dude was a pretty established local hip hop artist out in the area I was from. I remember returning back to the area a few summers ago we had talked about recording a few tracks and possibly an EP with a band he also worked with as well.

Eventually, I was introduced to the band I would eventually not only work with but become a part of by the name, “Project Mantra”. They combined a mix of hip hop and folk-punk style along with a few key elements that eventually started to influence my mixing and writing styles towards not only a more urban sound but a very raw sounding style which I believe came from the punk side of the bands sound.

Eventually, we recorded, mixed, and released the EP “Fairytales for fire starters” to all the major digital stores and streaming platforms. So I Gotta give credit to that being a huge part of the concepts to my date current projects, and also why I eventually started to lean towards more of the hip hop side of things with recent projects.

Trying to keep everything organized has gotta be the biggest challenge for me personally. At times I find I have to disperse my time in a strategic manner when it comes to my schedule. Especially since I have a lot of ground to cover whether it’s writing music playing shows or mixing either my own projects or other individuals who either associate with our label or have outsourced their work our way. With that said, I feel my ability to work better under pressure and getting things in just In time really helps. It helps balance out my struggle in the organization/time management department.

By far have to say no. I believe everyone’s perception of what is good or who is the best varies with their taste in music as an individual. I feel for myself it’s more important that I aim for individuality and uniqueness in my style and craft.

I always make sure to try and push myself to be the best I can be for sure but to say I’m the best at what I do is a long shot. I am confident in my abilities as an engineer, songwriter, and producer but I know that somewhere to somebody, my style is not their cup of tea and to me, that is totally okay.

We have a few singles that have been announced for release come 2021. We have a full-length LP titled “Seven Deadly Sins” from our lovely and talented artist “Señorita Sin“come spring of 2021. We also plan to keep fans happy in the mean-time with a few singles of hers to be dropping up until the.

We also have our other talented artist by the name “Just Mic” aka Mike Paquin. A former bandmate of mine who also was in the band Project Mantra but also is working on his own solo hip hop projects. We have a planned single release come early 2021 and an EP that will be announced for release in the near future.

A few other projects and collaborations with various artists coming up soon but we will keep a little bit of mystery for the good folks who follow and support us!

All our Family, Friends, & Fans out there all continue to support us. Along with all the artists and associates in the music scene, we appreciate each one of you and we can’t wait to deliver some great music that is not only made for you but also inspired by you! Thank you and much love!

For sure I Have to say, don’t hold any doubt in yourself or your abilities. The Most Important thing I feel is to keep an open mind and try not to limit yourself with genres and guidelines that others have put in place.

I feel if you approach things from an outside view or different perspective than most other artists or producers. It truly helps you not only stand out as an individual, but you never know. You just might be the next big trending Artist, Producer, Engineer, or even all 3 of those things out in this business.