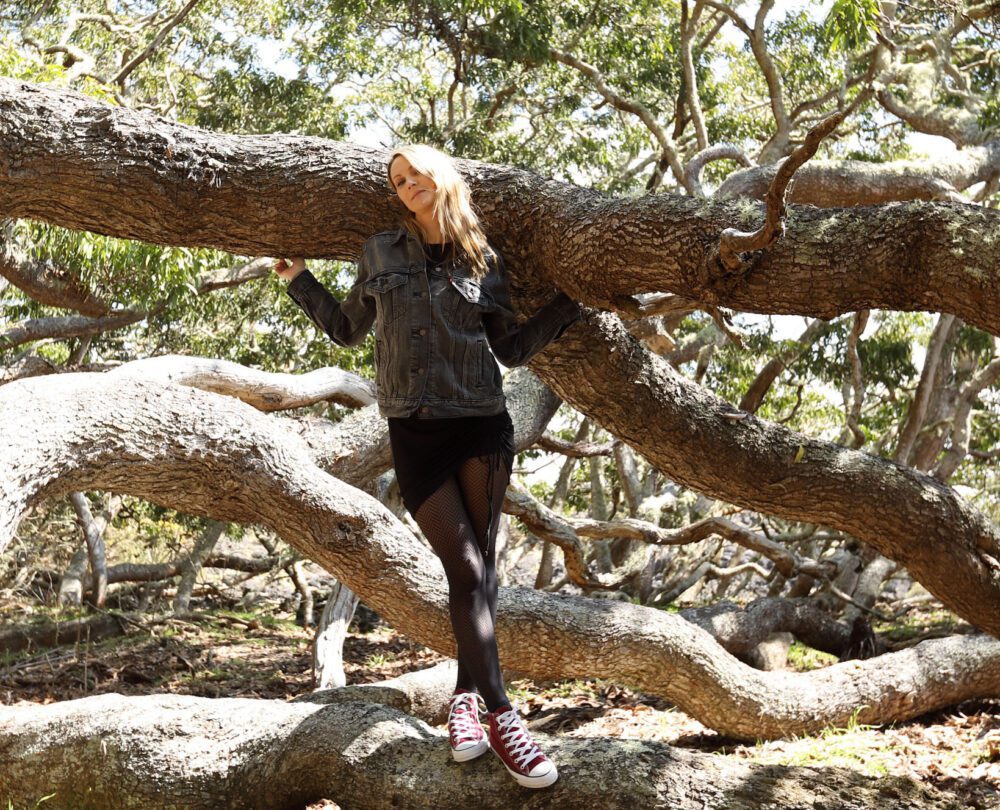 The video, directed by Christopher Roberts and Bub Pratt, filmed on the Na Ala Hele Trail and Ha’ena Beach, depicts Kailee walking through a tropical rain forest searching for someone to give her love to. Cuts to Kailee sitting beneath a tree playing her guitar in a white dress and standing alone on a stage, performing, imbue the visuals with the loneliness she feels.

At the end of the video, she moves slowly into the ocean, until she is completely submerged, mirroring the depth of the love she has to share.

“Passageways” travels on low-slung undulating tones, while Kailee’s crystalline timbres infuse the lyrics with her overwhelming desire to give and receive love.

Muzique Magazine spoke with Kailee Spark to discover how she got started in music, the inspiration for “Passageways,” and why she makes music.

Conor Oberst of Bright Eyes. His songwriting and lyrics are incredible to me. His songs can be dark or hopeful, playful, or somber, but they always seem to paint vivid imagery in my head and ignite my emotions.

My parents listened to a lot of artists like Bob Dylan and Cat Stevens. So, I grew up listening to that and always loved music. I started piano lessons when I was 8 and wrote my first song at age 12 which I performed at school events.

When I was a freshman in high school, this peculiar character from church “Uncle Billy,” who ran the local hot dog stand, dropped off a gift of an acoustic guitar on Christmas morning.  I was elated because I’d been wanting one for a long time. I started teaching myself and writing songs right away.

I formed a band in high school, with me on guitar/vocals, my best friend doing bass/vocals, and her little sister as the drummer. Our first song was called “Platform Sandals,” which I wrote about this chick who had a crush on my friend’s boyfriend.

Over the years I’ve continued to write songs and always knew I wanted to “do” music more, but it wasn’t until quarantine that I really said to myself, “Okay, let’s do this. It’s time to get my songs out there to the world. If no one likes them, well, at least I can say I tried.”  Fortunately, it seems that lots of people do like my songs!

What musicians/producers influenced you the most?

The musicians that influenced me most, in no particular order, are Jewel, Conor Oberst, Saves the Day, Laura Veirs, Cat Stevens, Weird Al Yankovich, Depeche Mode, and Emily Wells.

Lately, I’ve been on a Panjabi MC kick. It’s Punjabi rap and is very catchy. I’ve spent quite a bit of time in India, and I love lots of music from there. I’ve also been listening to a local artist named Drew Daniels. His song “Circles” has been stuck in my head for days.

What inspired your latest single “Passageways?”

It was inspired by falling in love with someone. It’s that thrilling moment when you realize you have a strong romantic connection with someone and you want to know everything about them, what made them who they are. What kinds of experiences have they had that contributed to their happiness and to their sorrow. And the premise of the song, in the beginning, is like, hey, I’ve done all of this stuff in my own life and traveled to so many places and seen so many things but now I want to explore this person. Let’s travel through and discover all the facets of this person, even if some parts are scary or sad as hell.

In the video, you walk and crawl through a swamp. What was that like?

The idea of it seemed really fun; actually, doing it was disgusting! It was a stagnant swampy mud puddle that smelled utterly foul. It was all warm and mushy and with each step, I didn’t know how deep it went.

It brought back these terrifying flashbacks from when I was 10 and almost died by walking into a muck pit, which is basically a huge deep hole of cow shit. (I was visiting a relative’s dairy farm and was wandering around and started sinking down into a muck pit like quicksand. My life flashed before my eyes and I thought my short life was over. Luckily, I managed to crawl out after getting up to my chin in shit.)

I think that the fact that it brought up those emotions made the story in the song come to life for me. The whole video shoot in the jungle was an emotional experience. It felt like I was on a cathartic journey, starting off feeling this total fear in the mud and then setting off on the “mission” to submerge and cleanse myself in the ocean. After I covered myself in mud it was another two-mile hike to get to the ocean, and I was exhausted by the time we reached it. Hiking barefoot over slippery, muddy trails in a mud-caked dress. I definitely got some strange looks from other hikers on the trail. Of course, Bub (the producer), always the funny guy, would say to other hikers as we passed “sorry guys, she had a little accident!”

Surrendering yourself to love can be wild, dreamy, beautiful, and terrifying. In loving someone, can you accept the darker parts of who they are?

Your album Savor This is slated to drop June 26. What can you share about the album?

I believe many people will be delighted with the variety and quality of songs on it. Some of the songs are ten years old, and some are brand new. Some are love songs, some are uplifting energetic songs, some are kind of sexy. The production of the songs complements my voice and acoustic guitar and piano in a very pleasant way. I’m grateful to have worked with Bub Pratt and Keli’i of Kuku’au Studio on this album.

I can’t imagine not making music! I enjoy it so much. When I’m in the flow, it feels like I’m just translating a song that already exists out there in the ether of the universe. Or like I’m a fisherman and fishing for the perfect melodies, hooks, and harmonies. It’s fun.

I typically just start fooling around with some guitar or piano chord progressions, then start humming a melody. If I’m really feeling it words and emotions will come up, and in that initial burst of inspiration, I’ll get a lot of a song done. I always record using the voice recorder app on my phone, so I won’t forget anything. Often, I will listen to it over and over and finish writing the song in my head while I’m on a walk, or on an airplane. I write the lyrics in a notebook in a way that probably wouldn’t make much sense to anyone else, just lots of chaos and mess, but it works for me.

Pretty soon it’s going to be time to record my second album! I’d love to do some live shows and touring after the world opens up a bit more. Stay tuned!