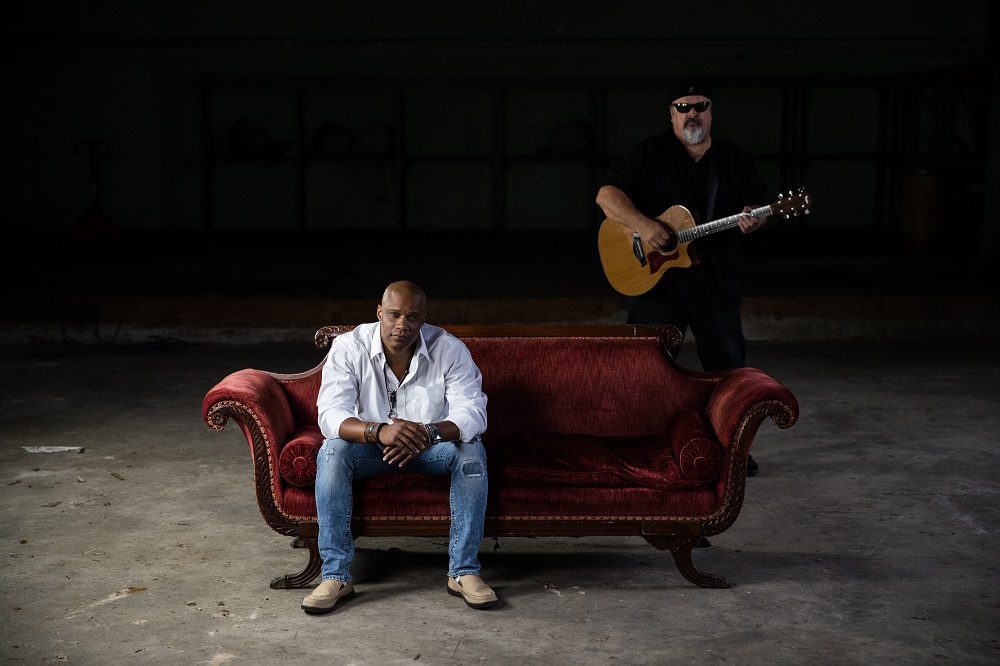 RJ, a native Carolina son, began singing at the early age of 7. Some of his favorite music heroes include Michael Jackson, Marvin Gaye, Al Green, KC & The Sunshine Band, Sam Cooke, and Otis Redding to name a few.

In 2006 RJ met Songwriter/Guitar Player/Producer James Eudy and together they began writing the songs and creating the sound that RJ and James continue to play today in RJ Adams Music Nation. The chemistry between them provides a unique recipe for writing storytelling lyrics backed by driving acoustic guitar.

One of the biggest breaks for RJ came when RJ and James wrote a song for a Pay-Per-View event where they performed “live” March 2007 in Las Vegas. The Pay-Per-View event aired in 15 countries where 120 million viewers tuned in worldwide along with 60,000 people in the arena.

The producers of the Pay-Per-View event heard RJ during a soundcheck and asked him to sing the National Anthem, which usually never makes the live broadcast, but after a soulful performance that brought the house down, they decided to air the performance.

RJ won a Myspace/American Idol wildcard contest when James secretly sent in a Video entry of RJ singing a Marvin Gaye song “Sexual Healing” acapella . He won the contest out of 36,000 entries and went straight to Hollywood for American Idol.

The longest performance RJ and James have ever played was 4 1/2 hours straight with no break. The crowd was great that night so we just didn’t want to stop!

RJ and James have opened for many National artist like KC & The Sunshine Band Rick Springfield and Lakeside to name a few at the Amphitheater !

RJ and James were featured in Acoustic Guitar Magazine in November 2015 announcing the release of their new album, Crow.

Rj Adams is my real name.

Rj- 7 yrs old I watched Michael Jackson perform and that was it, I wanted to dance and sing like Michael, I even had a homemade glove with glitter… Glitter was everywhere. From that day I just wanted to perform.

James- At age 13 I saw Ray Charles and it changed my life and made me want to play that style of music. At 13 I had a guitar but couldn’t afford lessons so I taught myself and wrote songs because I wasn’t good enough to play anyone else.

I would say all the greats, Sam Cooke, Stevie Wonder, Marvin Gaye, Bob Marley to name a few. Music allowed me to meet James in the beginning as we started to write songs and have been the best of friends since that day.

We just clicked with the style and it just felt good to us. We call it “Feel Good Music” We never stopped believing in our style which can be difficult to be original and we have written every album /song since together since that day.

James and I have been performing and writing since 2008. James had the music and some words and as usual, we sat down and just finished the song late one night. We knew it was special and carried a lot of responsibility because it was more of an anthem song for world peace. We just wanted to create something that could be apart of the greater solution for all people living in a now divided world.

Like many out of work musicians, COVID is our greatest challenge, we have lost 42 gigs so far this year. We average about 72 gigs a year.

We would never claim to be the best at music or anything in life for that matter, but we do and have worked very hard performing and writing all these years and have had some really great experiences.

To keep performing and writing positive music to whoever will listen, experience bigger and better music opportunities, and continuing to improve our craft.

There are too many, but Terry Trebilcock the original founder of the king of the cage, and Eddie Deluca for introducing us to terry. Terry gave us our largest opportunity when he allowed us to write a song and perform on Pay Per View in Las Vegas that aired to 120 million viewers in 15 countries.

Then as we were doing the soundcheck in the arena that day, he asks if we could sing the national anthem live on pay per view that night as well. Of course, we did, and It was a magical night. We could never thank him enough for that. That was a big start to our journey.

Never stop pursuing your passion and stay true to yourself !

Jay-M – Til Death Do Us Part
Ryan Lutness, up and coming basketball player out of Garnet Valley
Advertisement