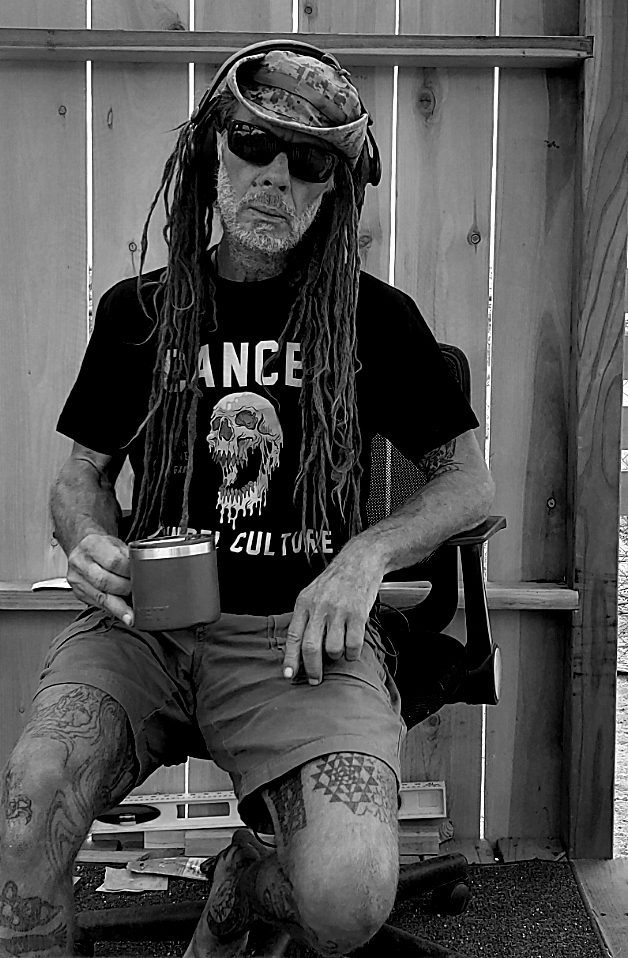 DJpt is derivative of my initials. My last name has been difficult for most of my friends in the past to linguistical acquire , let’s say, so I became PT to most. It carried into djing well as most of my listeners are global, from many languages because it was simple, in any of them.

I’m sure most musicians will say it’s been a lifelong interest, and that’s certainly true in my case. I had low-keyed spun tunes at parties for decades. I was also a pro climbing and ski guide for years and found myself living in Argentina when the first digital DJ programs hit. This was the early 2000s.

I already had been traveling with a computer full of sound, vinyl just didn’t work great for being so heavy. but getting a ripped copy of Traktor 1st edition changed everything. It’s what I had envisioned to be possible, but hadn’t seen yet. I had been waiting forever.

The voracious music culture there allowed a sense of what I could do with it, and the current form of the project formed then and there. I moved back to the states a few years later, to southern California where I was to spend the next 15 years working with variations of that system. I went through the learning curve with virtual DJ as they crafted their program and found my preferred tool. It’s been full-on since.

The digital era is what really inspired me. I’m of the Digweed age group, so I had seen a lot of vinyl spun, but the exponential amount of control over your mix with digital is what really set this present mode off.
I don’t really play songs, per se, mixing samples and instrument sounds is my arena, which was made possible by the tech. Vinyl just couldn’t go there, it’s a very different style. Legit also, but different.

There are so many permutations of dj’ing you can’t say anyone is superior, but when you find your jam, it fits. That would have been with the intro of digital software that worked. For me. The previous iterations were fun but nowhere near as serious.

My style, if you listen close, is based on fusion. In a mixing section, I might not only have samples from several producers running but a couple of different genres jamming, modified to work. So my influence list runs really deep.

Jimi Hendrix was major in how masterfully he was. I have a very heavy psytrance influence. Which allowed me to look at all genres(i play in several) with an unusual amount of depth. Reggae dub is sonically very influential and carries into the dub techno and drum and bass sets. There are so many DJs that have been inspiring. Amon Tobin, the prodigy, early rave. It’s an endless list there.

In 2010 dubstep was peaking out, and while some of the theories I found elusive. It absolutely tweaked the concept of the “bass” game-changing. 2012 was the sound revolution. Things you never heard before were possible due to new production tools. That inspired everyone I think.

You started seeing DJs like johnny blue and master Margherita going to new art levels.
The U.K. drum and bass scene wasn’t excluded and came up with its own amazing context. House also. Since 2010ish it’s just been fantastic what people are capable of, and it all inspires me. Except for pop music. I don’t really have any place for that honestly.

The DJ project overall is adaptable to several sonic situations, but the roots are artistic integrity. It’s the bests I feel for a given situation, organized into an appropriate piece of music called a set. The project is entirely based on that, with a no-compromise ethos. There’s no one telling me what to play. There’s no one paying me off to play some crap.

I felt that following a more individually creative line would benefit everyone, and I’ve been crushing the set charts with that. Artistic integrity and situational awareness are the concepts.

How many challenges… many many. I’m fully independent and unabashedly underground style. The industry deems to have a real problem with those types. I don’t know why as it’s where most of the creativity they rip comes from, but that’s very serious. You can get shadowbanned and blacklisted if you are deemed a threat or something. And that has been a thing.

Being indy means you do everything, and there are so many aspects. It’s n immense learning curve. I’m very artist, so being organized and sometimes even chatting up with people is difficult for me. That’s what agents ate for, but I’m my agent. And I’ve fired me several times. I feel kinda greasy in a salesman role so that’s challenging. Mostly in that aspect, I let the beats speak for me. But there are those details always. There are up and down cycles in success and that can be hard to keep moderated and not get jarred out of zen mode.

Work ethic isn’t a problem if I have interesting projects to stay motivated with. Of course, c19 has thrown everyone’s program off quite a lot. It’s kind of destroyed the foundations of everything but corporate music. So that’s challenging currently. I’m afraid of where it’s all going with draconian control mechanisms. It may be time to retire if I can’t keep a sense of integrity in the mix. That kind of shocks me I saw some major events happened in the U.K. this week with none of this passport stuff. Which I found hopeful for larger events.

Having frank opinions about these is also challenging in that you’ll probably be blacklisted for that. i find that disturbing for both me and the next generation to face.

If you reduce that to are you at the top of independent, global underground, master set dj’ism ,
I say you have a runner here. I think many others would also.

I was hoping to be at some larger live situations by now, after these cultural lockdowns, but I’m in California where it’s still crazy draconian, and I’m not sure it’s ever going to end till everyone’s poor, so, we’re trying to adapt. I see it might be possible globally but there are so many visa restrictions now.

I think smaller more private things are the way here for a while longer, but I may start climbing more again and settle into some album production. I’m keeping my eyes open to what’s going on, and looking for the right associates for the time.

One can only hope it can come back together properly. If not let me learn this new production software I’m starting to work with and watch out for some track releases.
It’s all up in the air at this point. And I mean everything.

So many, from the people that helped me ahead when I had nowhere to stay, to the top djs I’ve learned so much from, my friends that play instruments that educated me in theory, My friends that stuck through the process. Man. There are so many.

My main archive is on Mixcloud at https://www.mixcloud.com/pturecki/ And turecki inc. at Facebook which I rarely use as well as djptmusic at Instagram which I also don’t really use but can be reached at. Just haven’t been a huge fan of social media platforms lately.