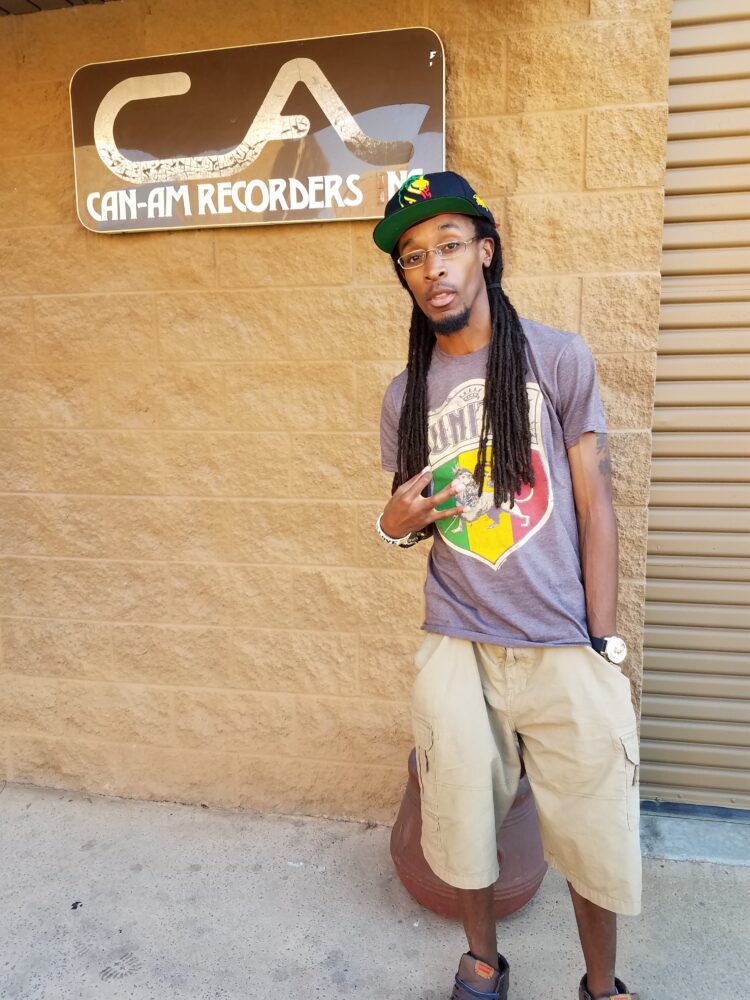 Dez Nado, honestly I came up with the name because I liked the way it sounded. This was around 7th or 8th grade in school. I put the meaning to it a couple of years later in high school, and it stands for the Definition of Effort and Zeal in Ambition and Dedication to Opportunity.

This just alludes to being on go in whatever your passion is in pursuit of what you want out of life, keeping that eye out and vision clear for opportunities that I believe either you or The Most High creates, and capitalizing on those opportunities to advance in life and the hereafter.

Music-wise I gotta say my Pops first. He was a music lover, and a musician himself. He would always be playing classic and lesser-known soul hits and other genres, James Brown to Gil Scott Heron, Jimi Hendrix to the Doobie Brothers.

I grew up in the church and got even more musical influence from being in the choir, I used to love how the organ player and drummer would improvise so effortlessly based on the choir director. I was privileged to be a part of a live album recording with Troy Sneed while he was here in the physical as a part of a mass youth choir in Atlanta, which in elementary school was my introduction to Atlanta.

Not sure if the album was GRAMMY-nominated or if Troy was GRAMMY-nominated, but I don’t think we appreciated the opportunity and experience we had as much as we should’ve. As kids, legit recording a live album, doing a full concert with just a couple of rehearsals. It was super dope, to say the least.

All of this was around the time that hip hop was freshly breaking into the global mainstream, around the peak of the East Coast/West Coast drama with Death Row Records and Bad Boy Records. Of course, we weren’t supposed to listen to that type of music but you know we did, especially me as the youngest sibling of 3 in my house.

I had all the hand-me-downs, and that’s some of my earliest memories– listening to “Notorious Thugs” and “Thug Luv” on a cassette player, watching “Smile” with 2Pac and Scarface trying to see if that was 2Pac in the music video. Later listening to artists like Busta Rhymes, Ruff Ryders, and of course Cash Money and No Limit.

Being from the south you couldn’t avoid hearing Cash Money taking over for the ’99 and 2000s. Right around that time my brothers and neighbors who I called my cousins started a rap group, and me being the youngest, my brother and neighbor/cousin wrote my first verse and we recorded it on cassette via stereo.

Once I heard my voice on a record, as opposed to hearing a whole choir, that was a wrap for me. I was in love with hip hop, for life. Fashion-wise, I gotta give it to my fam again.

Being the youngest, hand-me-downs wasn’t just old CDs and cassettes, it was clothing too. But, over time after my brother and sister moved out of the house, I developed my sense of style, which I think still today is something unique, not like most others. I stay with some dope socks and kicks.

Never owned a pair of Jordans not because I don’t think they’re dope, just prefer to walk my path. And I keep a snapback.

I dropped a track dedicated to Florida when I was in college in the late 2000s but didn’t have the right mindset to take it where it needed to go. So I just figured one day, I’ll drop another track for my home state and push it since I don’t think we have our “California Love” or “Georgia on my Mind” or “Empire State of Mind”, so this is part one.

Part 1 is just to get their attention, the media, Floridians, the industry, and radio. The next one is gonna be the official anthem. So ya’ll make sure you run this one plenty of times, because this one is setting the path for the next one: part 2.

I think it’s a complex question, ’cause I do a lot. I don’t think I’m the best at everything I love to do, no. I think it can be expected of me to outwork everyone doing what I do, though.

Rappers are supposed to think they’re the best, that’s normal. And when it comes to that pen game, I feel like talent-wise I’m up there with the best, but I don’t think I’m at my best yet.

Artists are always improving, evolving, getting better, delivering more powerful art, etc. I think I’m dope, don’t get me wrong, but my best work has not been created yet!

We’re moving forward with the Flawda Ish campaign, shooting the official video on May 15 in Duval on the beach. Encouraging everybody to come out, free BBQ while it lasts, bring the swimsuits, we’ll bring the vibes.

I know your platform is based in Miami, but if ya’ll want to come up to Duval for a weekend come on up. After that, I’ll be performing in Cancun Memorial Day weekend, back in Duval performing in Jacksonville Beach for the first-ever Juneteenth celebration in the city, then we’ll be in LA bringing that Flawda Ish to Cali, performing BET Awards weekend.

We’ll also be bringing back my TV series on our platforms this time around, with season 2 premiering in late Summer 2022. It’ll be viewable globally, so definitely stay tuned for that.

And in the fall, I’ll be dropping the next single which is going to be even more fire, leading up to Jamaica Dream Weekend and Jacksonville Caribbean Carnival in August.

Big thank you to Candice Alvita, Michael Sloan, and Bracy Photos for capturing the pics used here. J Chat and LDotG, and those mentioned above plus the artists I’m working with this year and have worked with recently for the projects we’ve collaborated on and will continue to collab on.

A big thanks to my city for continuing to support #FlawdaIsh and big up my whole state, Florida stand up!

Fans can find me @deznado on every major social media platform, I’m not hard to find. Follow me on Facebook for the most recent content update.

Press play on Flawda Ish wherever you stream music, and join the mailing list at www.VIPSquadNation.com to be the first to know about all of our upcoming events, special discounts, opportunities for Florida/Georgia events, and more!