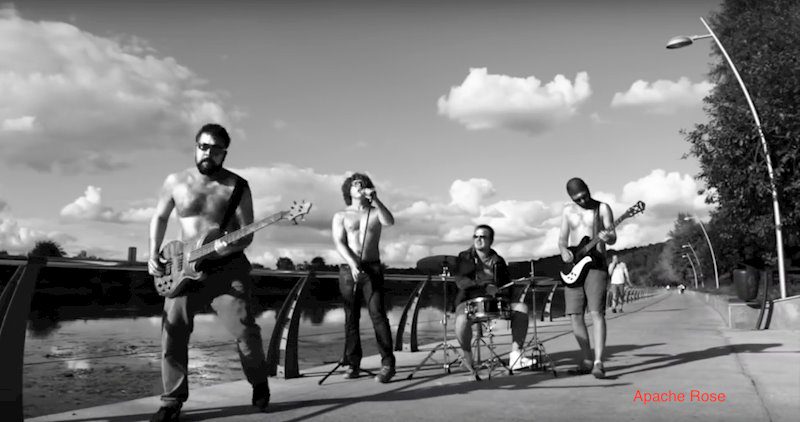 Moscow-based rock outfit Apache Rose dropped their debut album, Attention!, not long ago. One of the songs featured on the album is “Hit Me,” a song about abuse inside a relationship.

Known for their hard-hitting sound, on “Hit Me,” Apache Rose shows their versatility, initially injecting the song with hints of reggae, almost tender lyrics, and smooth keyboards. As the tune ramps up, Apache Rose does what they do best – pumps out aggressive sonic dynamics.

Guitarist/vocalist Ilya Novokhatskiy explains the song’s genesis, “As with all our songs the theme of the track came about unintentionally. We had no intention of pursuing this sensitive subject matter. Somehow the words ‘Hit me like you don’t want me to go / Hit me like you don’t want me’ just came to mind over the chorus and the other lyrics just let themselves be found.”

He goes on, adding, “While ‘Hit Me’ is a song about serious and depressing stuff, it didn’t come out all that sad. Instead, it goes into something dynamic and uplifting reflecting the notion that there’s a solution, a way out.”

Talking about the album, the band says, “We wanted to make an album like the ones we love, the one you could listen on repeat. Like Aerosmith’s ‘Rocks,’ Metallica’s ‘Kill’em All,’ Sex Pistols’ ‘Nevermind the Bollocks,’ Nirvana’s ‘Nevermind,’ Soundgarden’s ‘Superunknown,’ Stone Temple Pilots’ ‘Core,’ Arctic Monkeys’ first album. We hope we succeeded.”

“Hit Me” opens on gleaming, skiffing guitars riding a reggae one-drop-like beat as Ilya’s voice imbues the lyrics with dreamy tones, followed by mounting layers of sound rife with alt-rock heft. Once the tune expands and takes on surging energy, it punches with force.

Highlights on the album include “Easy,” “On My Watch” with its raw, grinding guitars, “You Kiss Like A Girl,” reminiscent of the Kings of Leon and Aerosmith, and the last track, “Some Kind of Love,” revealing the dazzling range of Ilya’s deluxe voice.

“Hit Me” demonstrates the ability of Apache Rose to supplement their potent ‘90s sound with softer, silky textures of reggae-lite harmonics.