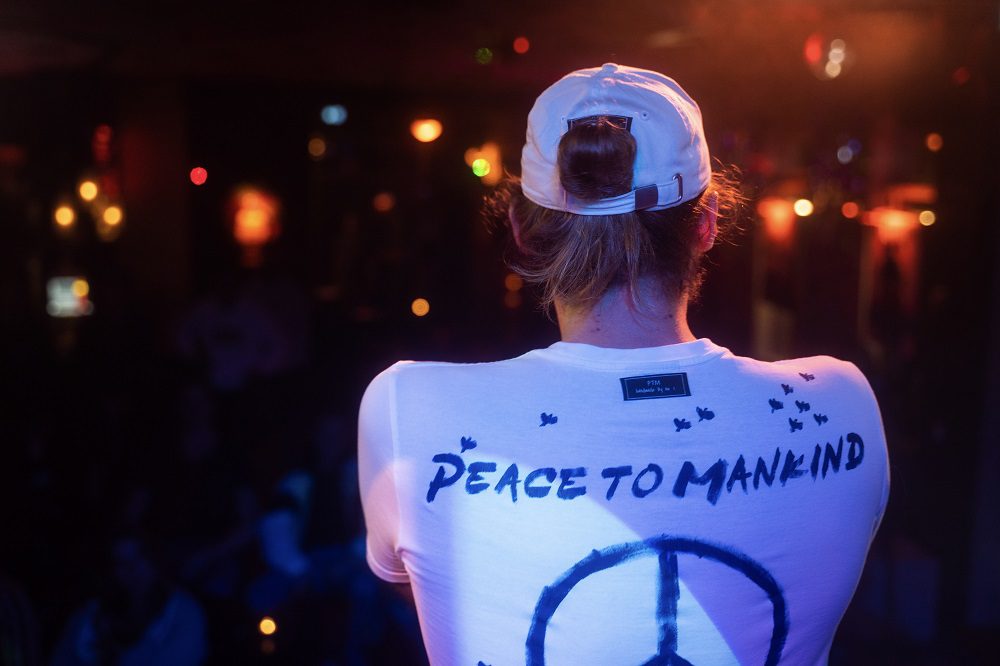 Oh, that’s a good one.. the whole idea of “PTM” was born in 2015 in New Zealand when a good friend of mine, Beaver, came to visit the house we were staying at and held this speech about using music as a tool to actually make a change in the world. PTM is my initials but it also stands for “Peace To Mankind”.

I have been writing all my life to be honest, ever since I can remember. I’m saying that because my “craft” is lyrics, poems, stories & being a wordsmith more so than making music. I got more into that later on even tho I started playing violin at an early age and added keyboard/piano to the mix later. I rediscovered my love for writing and making music at about 15/16 and that’s when I wrote my first verses and raps.. at some point years later it was just like, well, I’m doing it anyway so might as well give it a proper try and from that moment on I just grew into it..-

There are some days where it’s easier to motivate myself to do what needs to be done outside of making music and writing songs than others. I feel like nowadays – with so many people making and releasing music on the internet / DSPs – it’s just not enough to focus on making music and releasing it, you really gotta be a one-man army.. you have to make sure your music is reaching the masses and getting into as many ears as it possibly can, so the majority of my time ever since October 2020 I’m taking care of marketing, promotion, etc. rather than creating new songs.

I got no manager, booking agent, no nothing so I’m responsible for 99% of the shit that’s been happening for me. I’m happy it paid off and my music is heard worldwide by thousands of people every day now after releasing my music to a couple of hundred people on Spotify for more than 3 years.. that being said, my greatest attribute when it comes to my work ethic is probably having an incredibly big WHY that’s fueling me and I know every single thing I did and do for my WHY will be worth it in the end.

I feel like I’m still and probably always will be a fan first.. a fan of music in general but obviously rap music, but I’m one hundred percent the best at doing me, haha, no doubt about it!

Now I know I’m in a very competitive genre of music and y’all may be surprised hearing me say this so I’m an add something to my previous statement, haha: I am a hell of a performer and I really don’t know too many people (including famous rappers I’ve seen live myself) who can fuck with me when it comes to performing live and putting together a dope stage program.. for real! But do I have the best pen in the game? As of now, fuck no.

I do have a lot of time ahead to keep working on my craft and it’s definitely my goal to be a part of this conversation one day. but as I said in the beginning: no one can beat me at being me and doing me, that’s the most important thing!

I’m dropping my first live album in November this year and I’m tryna make it chart on iTunes whilst preselling so that’s gonna be exciting. I charted on Amazon’s bestseller lists a couple of times before and even made it to number one but it’s just not that many units being moved there compared to iTunes so that’d be a level up for sure.. it was my first show this year in June, digitally due to the pandemic and I was really impressed by myself as of what I had put together, how I transitioned the songs, etc.

The album will drop on DSPs and the visuals on my YouTube channel, it was a dope camera team there, six cameras, live cut and all that so make sure to keep your eyes out for “The Digital Covid Show”. I’m really happy I was able to perform for live audiences tho since then, it’s just not the same when I’m performing for cameras, haha. I love working for the crowd and all that so let’s hope the pandemic will be over soon and I can keep on killing stages!

Damn.. for sure, haha, thank you for the opportunity! I owe Matthias Kupka more than he knows probably.. he really sent me off to actually pursue a career in music I’d say.. there’s actually a funny story to this, haha: so it’s October 2018, I had just released my first song “Save Me” in March on DSPs but didn’t follow it up, started going to college and all that.. so it’s 2 am and he’s calling me up randomly, drunk as hell while I was high as giraffe nuts, hahaha.

So he said we gon do an album and I don’t have to worry about paying him or anything, I just gotta do it asap and that’s what we did haha.. so yeah, Matthias, I really love you man, thank you for making sure my production been A1 since day one and everything else you did. Obviously, there’s a lot of people I am truly grateful for, everyone in TeamPTM, every listener, every fan, every playlist curator who featured my music, every venue I was able to perform that, and more than I could mention here, haha.. just know: I love you all!

The best way to get in touch with me and become a part of the journey is following me on Instagram @iam_ptm – it has little following compared to my Facebook page but it’s just the social media platform I use the most, pretty much daily so make sure to follow me!

Other than that my YouTube channel is worth to be checked out so you can see for yourself whether or not I was capping about my abilities as a live performer, hahaha.. see for yourself and subscribe to stay tuned! It’s really much appreciated.

Don’t ever let anybody else tell you what you can or can’t do or how “ridiculous” your dreams and ambitions are.. stay true to yourself and work as hard as you possibly can.. be your own number one fan and don’t expect anything from nobody.. try to do as much as you can by yourself and don’t rely on anybody else, especially a label, A&R, manager or anything to come and put you on.

Also make sure to find your own, personal WHY that gets you motivated and fuels your drive.. when your WHY is bigger than anything else you’ll get shit done and find ways rather than excuses.. that goes for every single human being on the planet tho not only for other artists like myself.. oh and last but not least: don’t focus on other people and what they got going on, focus on yourself and making shit happen for yourself.. we’re obviously all guilty of that one but there’s really nothing to compare: it’s you vs. you.