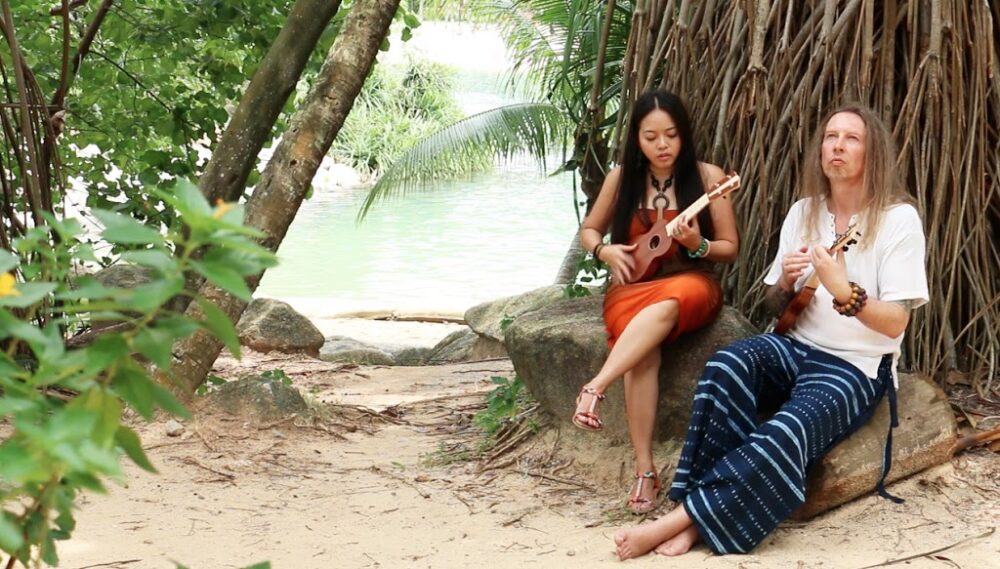 Muzique Magazine. Where are you from?
Zacq & Mari. Zacquine Miken (Zacq) is from Singapore, and Marius-Antonin Fleck (Mari) is from Germany.

Muzique Magazine. When did you start making music and taking it serious?
Zacq & Mari. From early on, Marius was raised in a very musical home and was granted musical education in a renowned church choir, starting at age 8. In his adult years, Marius released a professional CD with progressive-rock band ESPERANTO back in 1999. He has also worked the blues circuit in Texas (USA) and backed Diunna Greenleaf (then president of the Houston Blues
Society). It was during this time that he also played bass on and produced the self-titled debut album for Melinda Mones, a then up-and-coming singer-/songwriter.

Zacq has been writing songs since the 1990’s, and has taken part in song-writing competitions in Singapore, bagging the championship title for her song “Falling” in the “Songs I Write” song-writing competition on 7 December 2007. Her song “Falling” was also ranked number 2 in the Christian Breathecast billboard charts. Zacq’s first track appearance in a CD compilation was in 2006, when her Mandarin Chinese song “Hei An Guang Ming (From Darkness To Light)” was featured in the “Songs I Write” compilation CD. Zacq only started full professional studio recording in 2015, when she worked on single tracks and the full album production with Mari for their Zacq & Mari project.

Zacq & Mari’s latest professional music projects would be the single tracks that they worked together on and are featured in various CD samplers/compilations, such as:

Muzique Magazine. How do you feel about the present state of the music industry?

Zacq: I feel that music before 2005 had better structure, had more thought put into arrangements, composition and instrumentation, and had more beautiful lyrics that were like poetry. There was more soul in artists and in the music, and bands and artists like Queen, the Scorpions, Kiss, David Bowie etc dared to be different and had their own unique identity, whereas these days, artists generally sound the same vocally and seem to re-use the same old loops and electronic drum kits. Music is now very commercialized, and it’s all about the money, and who is louder (the music volume itself has also gone louder, and pushed to the maximum volume).

More music listeners and consumers are also not that appreciative of music, as they tend to “watch” music videos, rather than appreciate the quality of the music, and they would prefer to download or stream free music than to buy the music. They don’t seem to mind if the music quality is terrible, while they listen to music on their ear buds/earphones.

Mari: With the advent of (a widespread) internet, the music industry changed radically – like pretty much every other aspect of life. Is it good or bad? It just is – and we all have to deal with it and find a way.

Muzique Magazine. Who influenced you to become an artist/band? Why?

Zacq: Deefhoof – an alternative indie band from the USA, Buddhiston (Japan), Crystal Castles (Canada) and GusGus (Iceland).
– I was encouraged when I personally talked to these artists when I attended their world tours and concerts, and I had long been an appreciator of their underground music and a fan. I had read and watched interviews of these artists and I was deeply encouraged by their life stories on how they overcame difficulties and hurdles to form their band and make experimental music together. I look at smaller artists instead of towards the big name artists for inspiration, as they are more relatable to me. These artists are also very true to their voice and identity.

I am also inspired by David Bowie’s and Queen’s experimental and bold music and identity, and they were crazily good. These artists make music art.

Mari: AC/DC always moved me, and certainly the Beatles, which created a body of work that is unparalleled. Amy Winehouse brought back vintage flair when all turned digital.

Muzique Magazine. What are you currently working on and how can the people find you?
Zacq & Mari. We have just released our new Zacq & Mari CD album titled “Zacq & Mari – a cross-continental ukulele joinery”. We are also working on a winter/Christmas track for 2018 and a summer track for 2019.

You can find our album and music on: