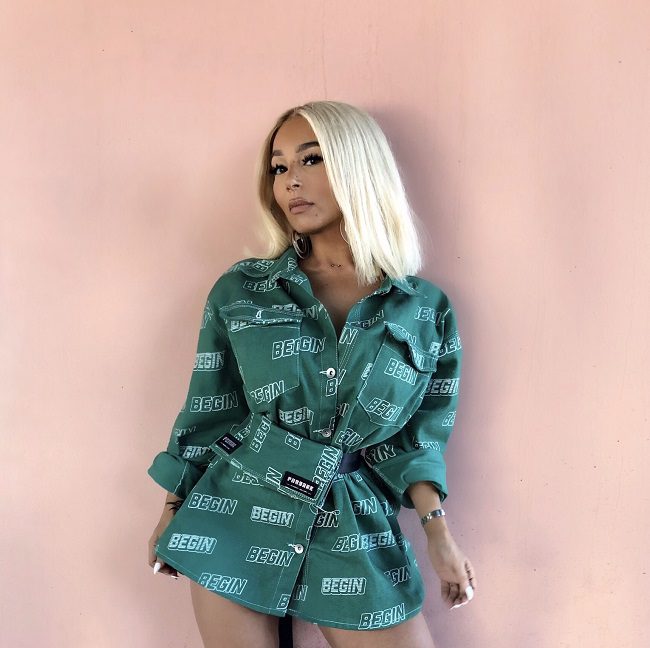 For many on this side of the pond, VH1’s Love & Hip Hop: Hollywood may be their first introduction to Little Donatella—the bubbly Brit who stole hearts with infamous one-liners like, “Her wig is coming off!” However, Donatella is far from new to the entertainment scene. She first fell in love with hip-hop in London, getting her start as the host of interview series GRMdaily, MTV and Flava TV.

Ultimately, becoming one of the first British journalists to document the rise of London’s underground hip-hop scene— known as Grime, Donatella is deemed a catalyst in bridging the gap between the English and American hip-hop scene.

With an international legacy preceding her, Donatella began transforming her network into a business: booking talent and giving a unique platform to everyone from 50 Cent, to Snoop Dogg, Big Sean, and even Bobby Shmurda.

While it was clear Donatella had an ear for music, a face, and personality fit for the camera, it was time to evolve and make power moves. Relocating to Los Angeles, CA in 2014, Donatella immediately hit the ground running; developing her media brand, graduating from on-camera Host to creative director, A&R and artist management.

One of her first gigs in the U.S. was with Stampede MGMT, spearheading creative direction and global marketing for Busta Rhymes, Riff Raff, Ty$ and Snoop Dogg. Called upon to source talent for the MOBO awards quickly spiraled into a global marketing position with Jeremih while serving as A&R for his fourth studio album, Late Nights: Europe.

Donatella’s passion for developing talent and strategically putting the right people together quickly catapulted an enthusiasm into an established business. She launched Connect the Dots, Intl., a media concierge service, offering clients of all industries an array of elite services from connecting talent, booking studios, and producers, to securing performance space, local tours, and even a host of charitable opportunities.

As if being a female pioneer in the media and music industries was hardly enough, Donatella soon paved her own lane in the cannabis industry with Peachy Tings, fun and user-friendly twist on the plant-friendly business. An educated, marijuana connoisseur, Donatella was crowned the “Ganja Queen” by the one and only Snoop Dogg, after an interview and bake-out session went viral.

She now has her own line of marijuana accessories, including rolling papers and is even creating new 420 friendly web series, where she teaches rolling 101, bakes edibles and keeps the social conversation of ganja culture relevant.

She launched Connect the Dots, Intl., a media concierge service, offering clients of all industries an array of elite services from connecting talent, booking studios, and producers, to securing performance space, local tours, and even a host of charitable opportunities.

When did you discover your love for music and what made you realize you wanted to pursue a career in it?

Ever since I was a little girl I have had a passion for the arts.

On your current/upcoming project  How did you come up with the concept?

Yes, I just did a collaboration called Volume 1 with @ulygold for her Uly Gold Line our first piece is a unisex shirt/dress with matching bag.

I think it’s hard sometimes to always believe in yourself and keep going when things get hard. It’s when you do push through though that you get the blessing you’ve been waiting for. My perseverance is definitely my greatest attribute. If I say I’m going to do something I don’t stop til I’ve done it. I have so much left on my list.

There is nobody who can do what I do.

What impression would you like fans to be left with after experiencing your craft?

I’m about to start filming for season 6 of Love and Hip Hop Hollywood.

Thank you to everyone who supports me in my journey. You know who you are.