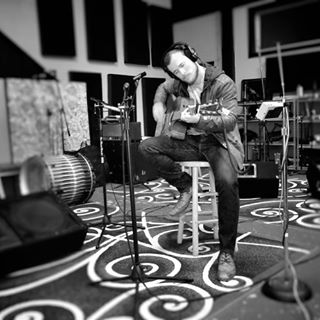 Muzique Magazine. When did you start making music and taking it serious?
Graham Harper. I have been playing music since I was about 10 years old, but I really began to take it seriously and start pursuing it as potential career around the time I graduated from high school. I started writing my own material and playing out in the bars around 17/18 years old.

Muzique Magazine. Would you prefer to be independent or signed to a major?
Graham Harper. I think that I would prefer to stay independent. I want to be able to maintain control over my creative process and intellectual property. In the age of the internet it is much easier to bypass the ‘system’ and reach your audience directly so there is not as much need to sign to a major label. If I were to find myself in a place where I could sign to a label to help boost my marketing and audience but maintain control over my work I would definitely consider the possibility, however that rarely ever happens and I prefer my integrity over mass appeal.

Muzique Magazine. How do you feel about pirating?
Graham Harper. Pirating is absolutely a major problem that currently plagues the music world. It makes it considerably harder for musicians to see returns on their investment, of both work and money, into their music which is their product. It also makes it especially difficult for independent musicians like myself who have a considerably more limited market outreach and no big named label to protect their investments. Pirating is stealing. Period. Personally, I refuse to even use streaming services because of how poorly they pay the musicians whose music they use. If I listen to someones music, I either bought a physical copy or a digital copy. All of that being said, whether its through purchase, streaming, or even pirating, I want people to listen to my music and I want to put it out to the rest of the world in as many formats as possible. If someone steals my song, likes it, then turns around and buys a ticket to one of my show, in my mind that is still a net gain. I don’t approve of the pirating, but there is little I can do about it and I’d rather give my music away and gain a fan than hoard it to myself and never have a thing to show for it.

Muzique Magazine. Who was your inspiration?
Graham Harper. I had several different sources of inspiration growing up. Both of my parents for starters. My dad is a musician and because of that I was exposed to a wide range of good music from an early age. I grew up steeped in both the art and the business of the music world and without him, I probably wouldn’t be doing this today. My mom forced me to read and do creative writing projects from an early age which, while at the time I hated, are probably the main reason I am a writer today. Two musicians who had a big impact on me from an early age were Van Morrison and Jackson Browne. They were both incredible songwriters with such massive and diverse music catalogs that I was constantly discovering new songs I loved. They made me want to write like they did and still have a heavy influence on how I write today. I also had several teachers during my grade school years who encouraged me to write and be more creative and somehow figured out a way to always make literature fascinating even when it got tedious.

Muzique Magazine. Tell us about your new project.
Graham Harper. I am currently in the writing and planning/ ironing-out-the-details phase of a new EP and full length record. I will be starting in the studio in late winter/ early spring of 2019. The new material is due out later that year. Much of these new records has been years in the making and writing. I’m incredibly excited to share it with all of my fans and followers ASAP.

Muzique Magazine. What was your biggest risk taken in your career?
Graham Harper. Apart from all of the money spent on gear and promotion, hours spent on the road, and seat equity spent in practice and writing, the biggest risk I have ever taken with my career in music is to give up a full academic ride to Auburn University. I spent a year and a half there and never could find anything that made me happy or inspired me like the music. Despite the opportunity to get a degree at a considerably cheaper cost that most people would jump at the chance for, I burned that bridge (gladly) and went searching for what truly made me happy. Haven’t regretted it once since I chose to chase my dreams (even when I couldn’t pay the bills).

Muzique Magazine. What is your ultimate goal at the end of your career?
Graham Harper. The ultimate goal at the end of my career is to be able to say I left everything on the stage right where it belongs. If I can make a living doing what I love the most and have the support of a fan base that truly loves what I write and what I do, I will be happy. I don’t need multi-million dollar contract, a shelf full of awards, or some mansion in a gated community to complete my goals. As long as I can pay my bills and take care of my family I will be content. I’d rather have a hundred followers who can’t wait for the next record to drop or the next time I come through town than one hundred thousand fans who won’t know who I am or what song I sang five years from now.