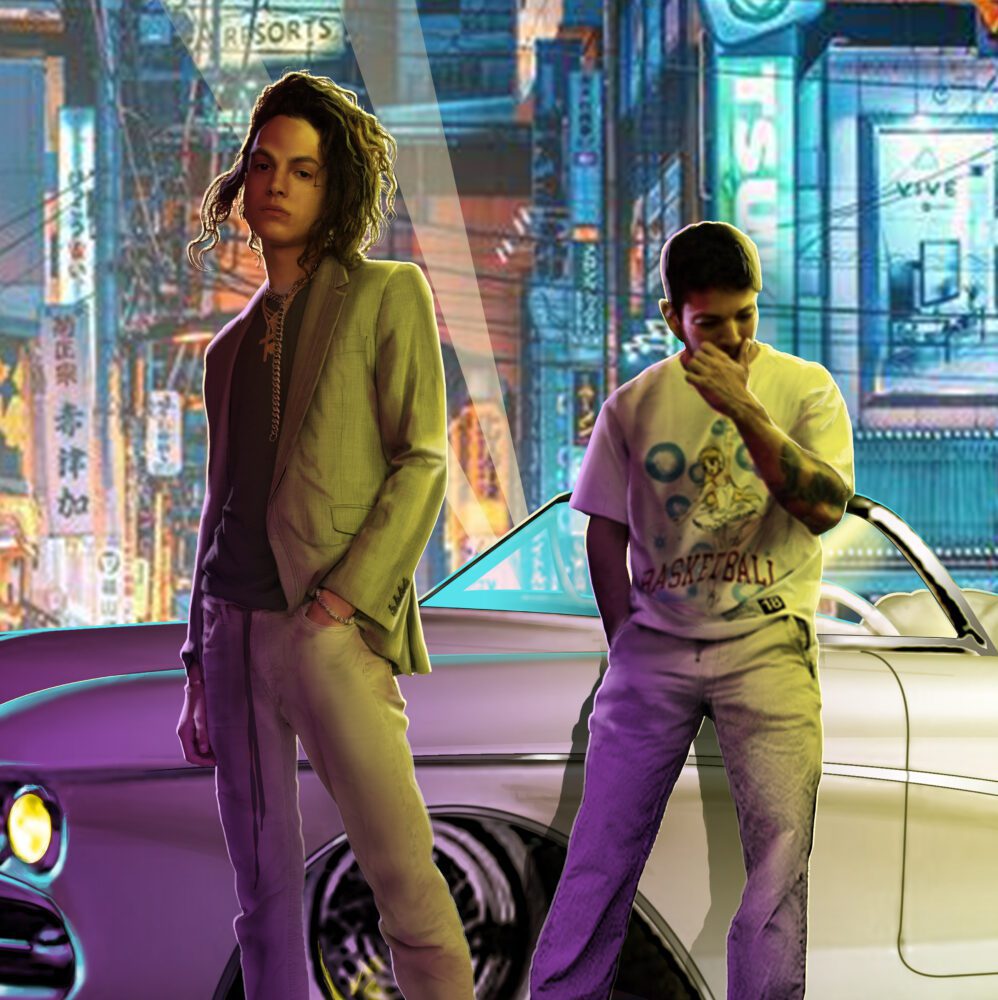 Moments ago, the ET Boys unveiled their debut single/music video, “Sober,” a hella-infectious song, leaving listeners saying, “ET Boys got it going on!”

Talking about the ET Boys, house vocalist, and CEO of Wake Up! Music, Pepper Gomez, says, “I’ve been waiting for a Nu Pop act to sign to the label, but little did I know it would come from my own sons.”

Made up of Sharkeyes and his brother, Tacboy, the ET Boys ooze oodles of talent – talent with muscle. Sharkeyes is an M.D. and Tacboy is a model with IMG. Together, they churn out dazzling, catchy music blending Nu-pop and melodic hip-hop, as well as other flavors. Sharkeyes generates the music, while Tacboy handles lyrics and vocals.

Sharkeyes explains, “These sounds cannot be forced into creation but rather are born from the bonds of brotherhood.”

Impressed by “Sober,” Muzique Magazine spoke with Sharkeyes to discover more about the person behind the music and his creative process.

Three things you can’t live without?

Of course, I wanna say music but that is a given and such a cliché answer. Like damn, the artist can’t live without music? No shit, dude. So I’ll give you a better answer.

First up is my car, a 2012 WRX. Bone stock. I’ve always loved going fast ever since I was a kid. My job is really stressful, and I see death every day. For me, nothing is a better stress reliever after a bullshit day at work than punching it and ripping through the gears of my WRX. If you asked me a year ago my answer would’ve been my motorcycle, a CBR 600RR, but some assholes on Miami beach stole it.

Second would be video games. Some of my favorites are Final Fantasy VII and X, Soul Reaver, and the N64 Legend of Zeldas.  Video games are my favorite piece of media. They also contain some of the most beautiful soundtracks and compositions I’ve heard. They’re art…and can touch on so many themes and lessons that TV shows or movies just can’t.

The third is water, ever since I moved away from the beach, I realized how much living by water meant to me. I forgot where I heard it but there is a calm and comforting effect we get from looking at water that is engrained in our DNA. Like back in the day when our ancestors were traveling and came across a body of water, it meant you can rest and settle down. I also miss skimboarding.

What inspired your new single, “Sober?”

Nothing really inspired it. I just sat down and made a beat and sent it to my brother. The vocals he sent back were catchy as hell so I knew we had to make it a full song.

What do you hope your fans take away from the video?

Well, I hope the song makes you feel good or hypes you up, especially as the world opens up again and people can have nights out like normal.

Take whatever you want from the video. I’m not here to tell you how to interpret or appreciate music or art. Like what you like… there’s no right or wrong answer.

This is your first single. Why this song?

I think out of our initial bundle of songs that we took from my laptop and recorded in a real studio, this one is the catchiest.

It’s pretty simple. I just sit down and mess around until something catches my ear. I’ll then develop it into a half-produced idea no longer than one minute. Then I send it to my brother and ask him if he’s feeling it. If he is then I’ll keep working on it and develop it into song form. If not, I just move on.

How did you get started in music? What’s the backstory?

I grew up playing the piano and taking piano lessons because of my mom. At the time I hated it and thought playing scales and learning proper piano form was so annoying. By the time I was 11 or 12, I was able to convince her to put me in drum lessons instead, which I enjoyed way more. I still play piano today (shoutouts Yann Tiersen) but I consider myself more of a drummer than a pianist at this point.

Then in med school, I started fucking around in FL studio and sending beats to my brother once I noticed he was starting to write lyrics and sing. Over time, it went from pure shit to hey, this isn’t so bad – to hey, some people might really like this.

I’m not really sure. I draw from a lot of genres. Pop, synthwave, hip hop, trap…even video games.  Then my brother’s vocals add their own twist. I guess pop if you had to place it, but really, it’s just ET boys.

Whats the story behind the name Sharkeyes?

There’s not really a story but…. sharks have pitch-black eyes and my eyes are super dark brown…basically black. So they remind me of shark eyes. But mainly I just think it sounds cool.

You’ve been compared to Ray Manzarek of The Doors. What do you think of the comparison?

Who the hell said that? That’s crazy. I appreciate the compliment and thanks to whoever said that, but I just like making music, dude. I make music on a little old ass laptop in the sunroom of my 1 bedroom apartment. I’m no Ray.

What sets your music apart?

Our music is kind of genre-bending and when it comes together with my brother’s vocals it kind of becomes its own genre. Although the songs cross genres and one may be more EDM sounding, one may be more pop, or hip hop, or whatever… they are all still clearly identifiable as an ET Boys song. When people listen to a couple of our tunes, they’ll see what I mean.

Which artists are killing it right now?

I have no idea, dude. Work eats up 99% of my time. Sometimes I don’t even wipe my ass. I just skip it. Or sometimes I wipe before I shit…that also saves time. The little free time I get, I’d rather work on our own music.

What are your plans for any future releases?

Oh. we have a ton of music on the way. Before this release, we took down all of our amateur recordings on Soundcloud. It was about 20ish songs. Then we also have “the vault” which is reaching almost 100 unpolished songs. Most will never see the light of day as we have continued to grow and improve but there are a ton of ideas in there. When my brother and I get together and were both feeling it, it’s not uncommon for us to bang out several songs in a day or two.

This was my first interview by the way, so thank you. It was fun, these were some good questions. Thank you.