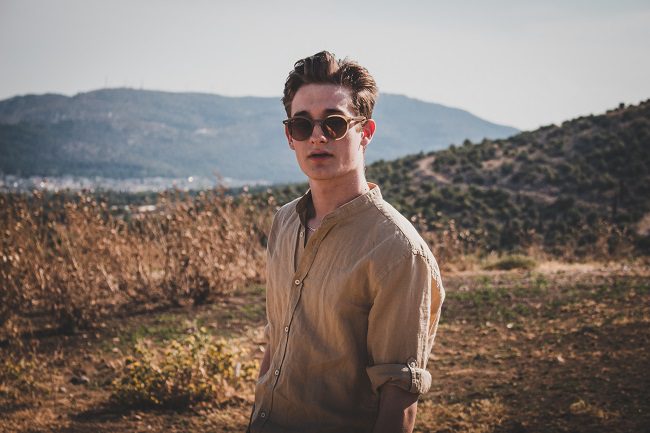 Started writing songs at the age of 13, Pop singer/songwriter and music producer Dan Kjellberg was born and raised in Athens, Greece. Following street-style-based lyric writing and a mainstream sound, Kjellberg is producing all of his songs in his home studio and he is known for his clean and raw vocals on his records.

Well, my big brother was a huge influence. He was the first one to really get me into music in the first place. He used to put on Metallica and Iron Maiden songs ALL the time and I guess, that was the first time I remember that I wanted to learn how to play the guitar and sing.

With time, my music taste has changed a lot. I still listen to rock, metal, and genres like that, of course; but, there was something really soothing and simple about pop music that it turned everything in that direction.

I remember when I first listened to “Apologise” by OneRepublic. Once I did I thought: “I got to make a cover of this song on Youtube”. So I opened a channel and did it on the same day. That was the first time I got into pop music. Later on, I started listening to other artists such as Paul Simon, Shawn Mendes, all of Frank Duke’s records and by far all-time favorite; Khalid. I heard about two years back.

The song was about a breakup -as most pop singles this day. I remember feeling so empty after that and really didn’t feel like doing anything about myself. I stopped making music, going to college and the worst of all -which this is the concept that the entire song is based on.

Not feeling comfortable about opening up to other persons with the fear that they will end up hurting me as well. I didn’t want to make something sad though. I don’t like making sad records -with some exceptions, of course. So I made a reggae-style pop song following it with somewhat of a “sad” concept behind the lyrics.

Keeping it real. It’s so hard these days, especially with the current music industry to make something that will appeal to all. I know that I want to have somewhat of a “mainstream” sound, but I don’t want to become “THAT” artist.

Keep releasing as much music as I can. That is the goal. Having a close connection with the people that hear my music and constantly making new connections in the music industry.

Mom and grandma for sure. They “spent” so much money on me. Helped me build my whole home studio and “promoted” me as best as they could to their friends and colleagues.

I guess, my parents in general. They never told me not to proceed with music. Which may sound strange -regarding that most parents want a safe career for their kids, but they never tried to discourage me.

I have all the links to my social below: