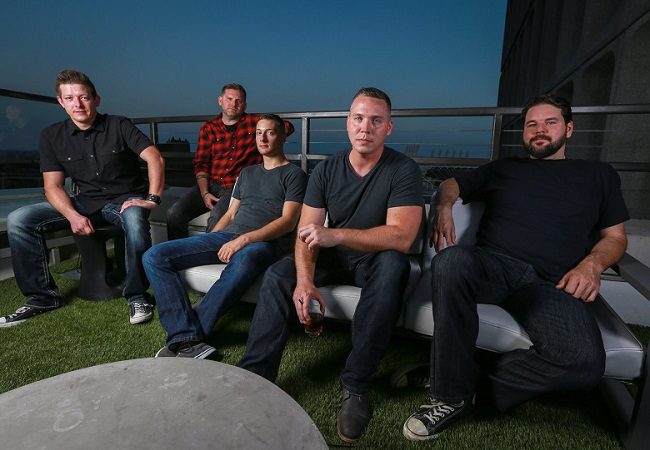 Rising from the ashes of some of the most prominent Cleveland rock bands, Critic City has returned to the scene with a brand new EP Four Chambers or Six featuring 5 original songs and a cover of Aerosmith’s “Livin’ on the Edge.”

Chris Donley: “We just felt that it would be fun to do things a little differently this time around. Music has changed so much in so little time that the approach of releasing music has become entirely different – and with the way the world is right now we felt that recreating “Livin’ On the Edge” was appropriate!”

With the first single, “Shoulders” (released for free download on Friday, Nov. 9 on SoundCloud), the band comes out of the gates swinging with an up-tempo rocker with such a hook it will be stuck in your head for days.

​Other songs on the upcoming EP, Four Chambers Or Six, are “Heart Roulette” and “Hostage” with are both available for free download on the band’s Soundcloud page.

​Videos for “Shoulders” and “Arson of a Bitch”  have already been released as well as lyric videos for “Heart Roulette” and “Hostage” on Youtube.

We sat down with 100+ names and narrowed it down to four names and whichever got (2) votes minimum was the winner which was guaranteed with there being five of us.

Critic City became the choice and we’ve been slowly incorporating different ways to utilize the name as we’ve opened the door to be more than just a hard rock band but a group of people that can express thoughts individually as well as collectively.

We’ve been lucky to have family that’s supported all of us from the start of our interest in music which allowed us to find our love for not only listening to all that music had to offer early in our lives but also the performance and writing of it.

As we grew up and started our first bands, we all had the first experience performing in front of friends and strangers which introduced us to a different kind of energy to feed off of. You kind of never want it to go away so you keep going back for it, over and over.

The concept has always been simple for us. We write music that feels good to us and if it’s something other people can latch onto, feel, and appreciate then great! We will write songs that range from extremely heavy to a radio-friendly pop song which comes from writing what feels right at that moment. We write music freely and without concern for what the perception of our music will be.

No way! There are so many amazing artists and bands out there today that blow us away but we take pride in the fact that what we bring to the table is honest and true to each of us. When we perform live, we’re bringing as much energy with us as we can and anyone that wants to enjoy the ride with us, we’re happy to celebrate with!

We just released our single EP “Shoulders” which features our debut single from our first EP “Four Chambers or Six” that released in January. Additionally, it has our cover of “Into You” by Ariana Grande and acoustic versions of both songs.

So, right now we’re pushing those while gearing up for already scheduled shows throughout the summer/fall. We’re aiming to release our next full length in November so we’re thinking the first single off of that yet to be name release will come out in August.

If you like what you hear, you can find us at the sites below: