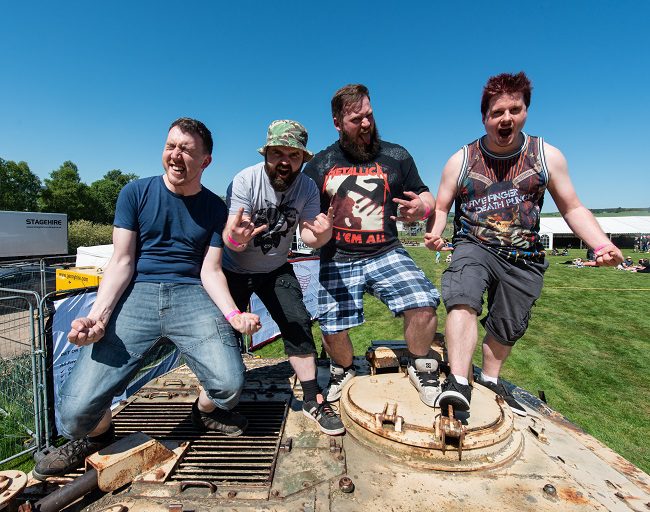 It took us about a month after we first got together to come up with a name, we probably talked about over 150 different names but nothing stood out. Our singer Justin came up with Attack Pattern Delta and it stuck with us all, obviously, it’s a big reference to both Star Wars and Star Trek – all four of us are huge Science Fiction nerds so it made sense. We actually now have a full wall-sized mural in our practice room of the attack pattern delta maneuver on the AT-AT’s in The Empire Strikes Back!

I think all four of us would love to make a career out of the music, who doesn’t?! We all started our love of metal and punk in high school, they’re both very raw and honest genres and have a lot of weight to them.

When you’re a teenager they’re a great mode of release, and as genre’s, they’ve always played a huge influence on the way we approach music. As we’ve gotten older we’ve started adding more progressive elements to our sound, but we still love the balls-out upbeat heavy stuff, it doesn’t get much better than that.

We all enjoy the old school thrash bands from the ’80s, Metallica, Megadeth, Slayer, Annihilator, etc. but we all kind of grew up through the Nu Metal era, so more down-tuned diminished sounding bands like Deftones, Korn, Slipknot, Disturbed, Mudvayne, System of Down.

These earlier styles were really the core foundation that we had, so when we started getting into bands like Sikth, Opeth, Dream Theatre, Devin Townsend, Mastodon it opened our eyes to adding different layers and approaching things from a different angle.

We’ve also recently been getting some influence from poly-rhythmic Djent bands like Tesseract, Vola, etc. but that’s a work in progress, it all goes into the melting pot!

We’ve just released our first 3 track EP called Vanishing Point, it consists of some of the first tracks we wrote as a band and our most played live songs. They weren’t written thematically together, and all 3 stand alone on their own merits.

A colossus on the Horizon is about our modern fears as a society about always being on the brink of nuclear war, and how the cold war never really ended. Line in the Sand was written by Justin about the Crusades and the persecution of Muslims through the ages culminating in the war in Iraq.

Old Hag Syndrome was written by our guitarist Stuart as a means of cathartic exorcism when he was suffering from night terrors, waking up seeing terrifying demons and visions. All three songs are really about looking over the edge, so that’s where the title Vanishing Point came from, it seemed pretty apt.

As we’ve hit our mid 30’s and are no spring chickens anymore, the biggest challenge is often finding the time to practice and get together. We love playing music together, but life sometimes gets in the way, we all have families, jobs, and commitments, so when we do get time together to jam, record or play a gig we really do appreciate it more than when we were younger.

We’re definitely a solid 4-piece, each element works very well individually to bring together a big sound, but practice makes perfect and we spend a lot of time in the practice room tweaking things and getting things just right for our gigs. We’re a really easy-going bunch, not much phases us so we have a lot of fun when we play and it really is our way of de-stressing.

Haha, absolutely not! There are far better guitarists, drummers, singers, bassists out there than us, even in Aberdeen where we’re from. I think what we do well is provide a great experience, when you’re listening to us there’s a lot of effort gone into making the songs sound amazing, or when we play live we really try and make sure the crowd is having a good time.

That’s what we really look to get out of the music, the enjoyment of playing and if other people like us then great, if not then that’s okay, we’re not for everyone. We’ve played with some awesome bands over the last few years, and it’s great to see there’s still some energy in the alternative music scene.

Well, we have a couple of gigs coming up later on in the summer, after those we’re planning on getting a new album together, we’ve been talking about concepts and what we want to achieve, there’s a lot of exciting stuff being talked about.

Fraser Edwards who produced our EP, he really is a world-class producer – he really captured the big and polished sound we wanted, also Nassif Younes who helped in tracking some of the records. Both guys are really sound and helped us out a lot. Also, the guys at Fudge promotions and Krakatoa for keep putting us on stage, they’re an awfully nice bunch. Captain Tom as well for putting us on the bill at Full Metal Haggis last year which we loved.

Really just want to say thanks to all our family and friends who come to the gigs, stream our songs and have supported us for the last four years, you lot are amazing!

You can get links to our online streaming sites through:

Our music video to Colossus on the Horizon is here: https://www.youtube.com/watch?v=RQus3HLFlvA

It doesn’t matter whether people like you or not, write and play music for you.