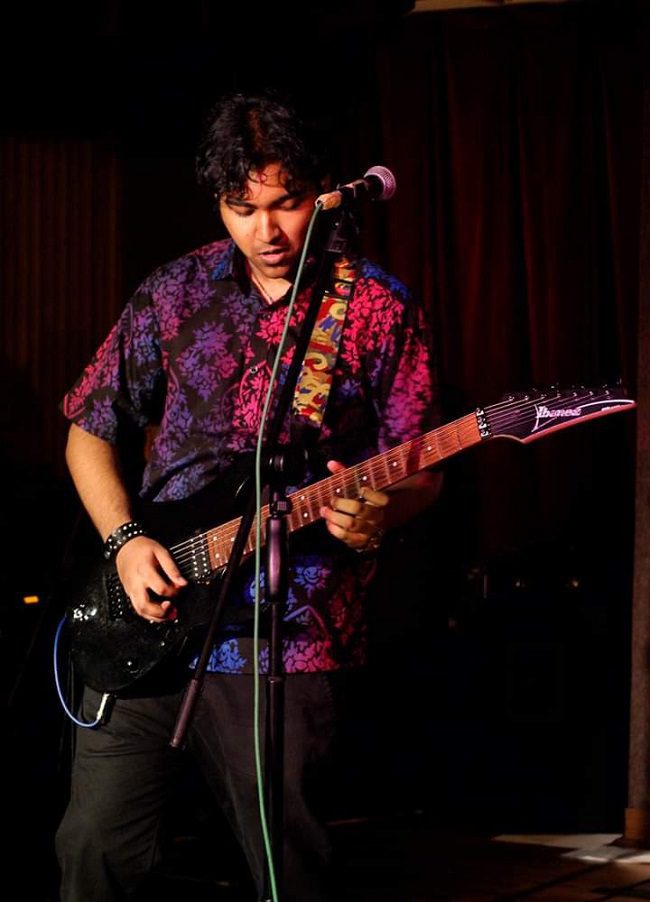 My Stage name is none other than my original name. Grandpa entitled me as “Digbijoy”, which means the ruler of the world. Sometimes, you have this chill down your spine when someone calls out your name. The first name, “Digbijoy” gives me that thrill.

So I decided to keep that as my stage name also, as the vibes are very important in music. Btw my friends do call me “Digiboy” sometimes, and that’s really very funny.

I was a painter, and I was obsessed with painting. But, I couldn’t break free through that art. I needed something more than that. One fine morning, I was talking to my brother in his room, and I just saw a big black bag, by the wall.

I thought, inside it would be a cricket bat or something, and I tried to swing it in the air, but he stopped me then and there. And shouted at me, that this is a “GUITAR”. He played it in front of me, and I was mesmerized. I wanted to have that, and when I took that piece of wood on my hand, it felt like I’m at the top of the world, just like any other kid.

And then my dad got me a Spanish hobner guitar, at the age of 10, and I practiced the heck out of it, ended up tearing my fingertips from the string and finger friction. Music became my hobby, passion, and life. I got obsessed, which I enjoyed to the core. That’s when I knew that this is the thing, I want to do in my life. As music seemed and still does, the best thing I can ever do.

My mentor. Eugene Arnold Jaraine, from India. He’s the guitarist of the first hardcore metal band from India, Adremelech, and now his own solo project Juratus. When I heard his music, it just flipped my world. That was the direction for me. The style.

But I’m also inspired by my father, Dr.Supratim Dutta, who is a doctor by profession but he is a bigger Rockhead than I am, musically. Through his influences, I came across the works of Ritchie Blackmore, Mark Knofler, Pink Floyd, Scorpions, Eagles, Eric Clapton, Iron Maiden, Dream Theater, and many more. They all have contributed to my style in a lot of ways, and precisely, hard rock with a classical crossover’, is my STYLE.

This is a solo project that I’m in, right now. And of course, I’ll be continuing this project as it gives me the freedom to go in any direction I wanna go.

Actually, I used to be the guitarist in many bands before like, The Metal Institute, DLZ, Neutral Dimension, INCUDRA. But I couldn’t last long in any of them, as I didn’t get the right people to play with. So I started to think about going solo and had a talk with my father.

He inspired me to the marrow and supported me all the way. Basically, I had it all, and I wanted to have a bit more control over what I was doing, rather than being dictated. So here’s the solo project.

To create something in rock music, which has never happened before in history. To invent a new technique that will change the trend of guitar playing entirely. To change the lives of people for the best of times, through my music. This is my greatest challenge.

Well, I felt like I was writing a lot of complicated stuff in music, and simplicity sells. Everyone can hum a simple and catchy tune, but sometimes people don’t get the point of all the complicated arrangements. So, I’m trying to have the melodic content as the top line and add a touch of simplicity and space to what I do, so that even the postman can whistle my music.

It’s very important to connect with the listener. If you have done that, then you have done your job as a musician, to chill, thrill, excite and amaze the mass. I think I’m very fast in composing songs and coming up with ideas. My recent album “Rock Thou Art Father”, was composed and recorded in 12 hours, believe it or not.

That was an album is dedicated as a tribute to Ritchie Blackmore. His music has redefined Rock n Roll to me. Very exciting isn’t it, when you are inspired to the marrow and finish writing an album within a night’s time?

Oh that’s right, I’m the best version of myself!

I am working on my upcoming albums. Once they are released, I’m planning to do an album tour when it’s the right time. Music, 24/7.

First I’d like to thank you for this great opportunity. But yes, there are many whom I respect for their contribution towards me. Some of them, whom I would want to thank are, My Grandpa, SP Dutta, my mentor, my parents, and Ritchie Blackmore. They have really contributed and inspired me to do, what I do best.

Follow your heart. Do exactly what you want to do and be true to yourself and your music. There’ll be naysayers, but you gotta move on and prove your metal. All the best.