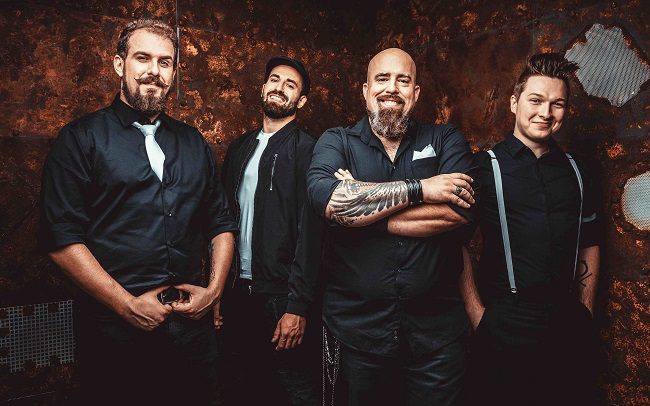 There are also good things coming out of Austrian basements – MAYBURN

The band that is soft enough so that your mom won’t think you’re a Satanist, but might ask why you’re not just listening to the charts like all the other good kids. The band to which you can bring your girlfriend because there are ‘beautiful singing and melodies’ in the songs, but secretly you are looking forward to the guitars and bass drum scrambling your brains. In a nutshell – the band that understands you.

No two of their concerts are the same and their show is incomparable and infectious. These boys are obviously calling the stage their home. They played many shows, including but not limited to Rock In Vienna 2015 (w/ Metallica, Muse, Kiss, etc), playing as support for Royal Republic, Crazy Town and touring through Germany in 2017. Currently, they are on Tour all across Western Europe.

That’s tough to say, we enjoyed our independence so far, as well as our current label ‘Alster Records’ – we have no experience with major labels. As long as the management is committed to supporting us, we really couldn’t care less, whether it is a major or indie label.

It sure hasn’t been getting easier to make music and be an artist. But if you put in a lot (a lot!) of work and take it very seriously, you might make it. Being lucky and well connected often helps as well, of course. Though people will try to take advantage of you, it has happened to us too.

The industry appears to be changing quite rapidly though and where it is headed is hard to tell. By now you have to be omnipresent on every popular streaming platform, which in essence pays you next to nothing, so having a day job is often required.

A good contender for that top spot might be playing at the Rock in Vienna festival on the same day as Muse and other major players. The overwhelming size of the stage and the production value will surely not be forgotten in quite a while!

Our drummer, Bernie enjoys video games and streams himself playing them, our singer, Peter plays disc golf and is into designing his own lamps, our bass player, Vladi, is quite the foodie and enjoys fine cuisine and our guitarist, Dimi, doesn’t have time away from music, he goes home and makes more music.

There is no particular image we can think of, to be honest. The message though is clear – live your life to the fullest and try to be a better man every day.

We just released our single ‘A Better Man‘ and are touring through Europe.  Afterward, we will lock ourselves in our studio, with some selected shows in between, as well as some summer festivals. Expect some new material to be released soon!

Sex, drugs and selling out. But in all seriousness, we would probably just like to be able to do this and make it our sole way of earning money so that it all supports itself. Getting rich and living the rockstar life, of course, sounds enticing, but honestly, just being able to play a lot of shows and make as much music as possible would be awesome enough!

Be happy for others and try not to be envious of their success. Also, if you wanna be taking seriously, then you gotta take what you do even more seriously.

First and foremost, of course, we would like to thank our fans, whom we call the ‘Mayburn Family’ because without them nothing we try to do would be possible.