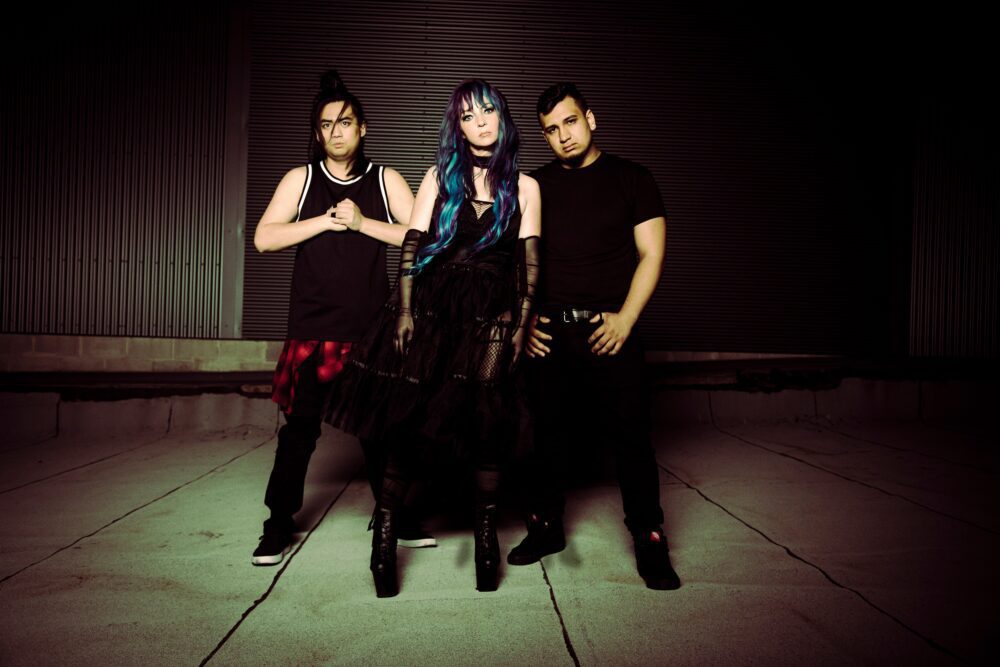 Ignescent has an upcoming EP, Ascension, that Muzique Magazine is eager to get its hands on. Simply because Ignescent unleashes swashbuckling rock energy infused with hints of alt-metal.

Ignescent’s hard-hitting sound has landed them on stages with Megadeth, Saliva, Eve 6, Fight the Fury, Otep, and Letters From the Fire, as well as appearances at the Vans Warped Tour, Summerfest, and Wisconsin’s Rock Fest.

The video, directed by Joseph Davis Castleberry, utilizes the interplay of light and shadow, akin to Ridley Scott, only Castleberry adds angular shots, illumination, steam, sweat, and ghostly reflections. The result, combined with the high-octane music, is an audio-visual experience analogous to the advent of a tsunami.

Jennifer Benson’s voice, at once wickedly alluring, rasping, and melodic, is definitely one of the best extant in rock. Her banshee screams trigger spinal horripilation.

Muzique Magazine caught up with Jennifer Benson to find out more about Ignescent, who is in the band, and their influences.

Who is in Ignescent and which instrument do they play?

How and when did Ignescent get together?

Ignescent formed in 2008. I started the band and put ads out on Craigslist and contacted musicians on BandMIx and held auditions.

‘Remnant’ is a small portion of something remaining after a catastrophe. After Covid and so many bands quitting, we wanted to tell the world that no matter what happens we won’t quit. Despite all the hardships, there is still hope.

Joseph Davis Castleberry directed the film, and it was shot in Chicago, Illinois.

Are you satisfied with the way the video turned out?

Yes. I am satisfied with the way the video turned out. Part of it was shot on the top of a very soft roof in heels. I had to be careful that my heels wouldn’t go through the roof. It was definitely challenging headbanging and dancing on it.

I started singing in church and my friend started taking voice lessons. I asked her who her voice teacher was because that interested me, and I started taking lessons soon after. After that, I started writing songs and decided I wanted to start a band and pursue music.

Which artists/musicians had the most impact on your sound?

Jinjer, Flyleaf, and Skillet have had the most impact on our sound.

Did Ignescent’s savage sound develop naturally or did the band deliberately push it in that direction?

For these new songs, I wanted a harder sound and asked the guitarist if we could start writing on 8 string-guitar. So, most of the new songs except for one on the new EP are written on an 8-string guitar with a harder rock sound.

Your forthcoming EP is titled Ascension. What can you share about it?

Three songs were produced by Cameron Pierce Mizell who worked with Memphis May Fire and Sleeping With Sirens and we do have one ballad that was mixed and edited by Nick Radovanovic, who has worked with Skillet.

Which artists are killing it right now?

What inspires your writing?

Experiences I go through inspire my writing. Usually, when I’m going through a tragedy, a heartbreak, or something in a relationship with someone that is impacting my life is when I write best. It helps me to get my emotions out and is sort of therapy for me. God also inspires me.

What comes first? Lyrics or melody?

Sometimes lyrics and melody for a chorus come at the same time or there is a melody with a few lyrics, but I need to fill the rest in.

What can your fans expect in the next 6 months? New material? Live gigs?

We definitely plan on having more music out in May or June after our EP comes out on March 4.  We have an EP Release Show at The Town, 2681 E New York St., Aurora, IL 60502 at 7:00 pm with special guest Sameer Bhattacharya of Flyleaf. We are booked at Rock Fest in Cadott, WI and many others. You can check out our shows at our website and on our Facebook page. We also have a show with Trapt on March 11 at The Back Bar in Janesville, WI.