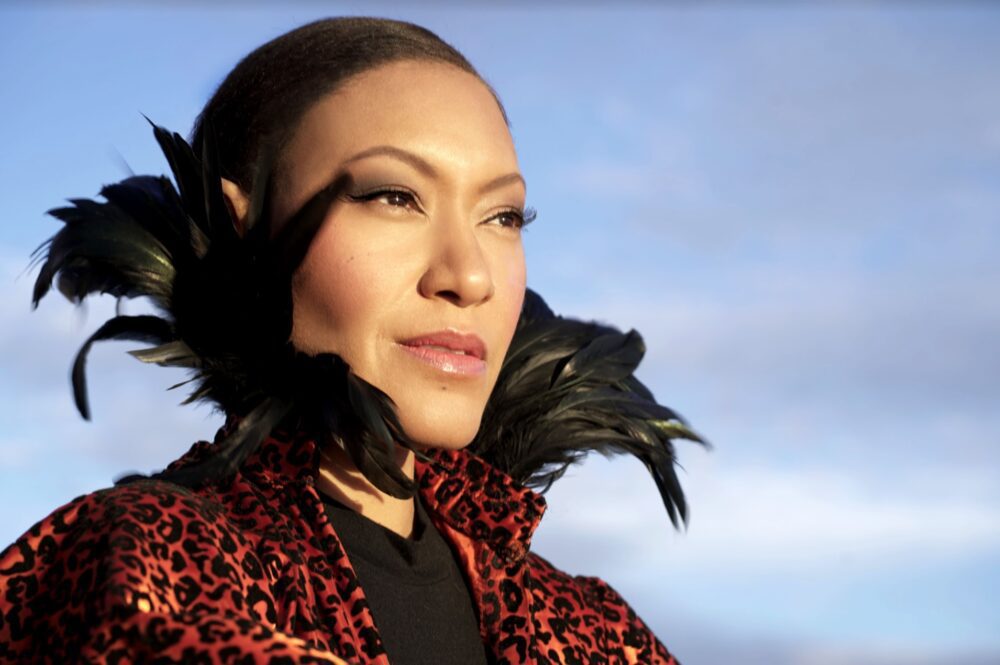 Singer-songwriter Cheri Moon recently released the music video for “Ain’t I A Woman,” a song inspired by Sojourner Truth, the former slave who went on to galvanize generations of women.

In the video, directed by Sophie Dia Pegrum, Cheri first appears in the role of Sojourner Truth, and then as a doctor, businesswoman, mother, astronaut, etc. The visual significance is well-defined: women can do anything.

The lyrics of the song mirror the power of the images.

“Measure yourself through your own eyes / For we were meant to lead in this life / We’re the teachers, leaders, sole believers / We’re the makers, motivators, life giving creatures.”

Powerful and infectious, “Ain’t I A Woman” rides a potent, rumbling rhythm topped by gleaming colors and soaring textures as Cheri’s evocative voice infuses the lyrics with surging passion.

Cheri’s compassion, independence, and strength motivated her to start SNOOKNUK, her children’s music project, created to inspire and encourage children to immerse themselves in the magic of life and all it has to offer.

Muzique Magazine spoke with Cheri Moon to discover how she got started in music, her influences, and the source of her independence.

I’m in Love with Dua Lipa!  I really love her music and the vibe I feel when I’m listening to her! Makes me want to dance!

I moved to NYC after a few years of college, and I joined a girl group that ended up getting a production deal with Jimmy Douglass & Timbaland.  With this opportunity, I had the chance to work with so many amazing producers as a background singer & writer.  I really grew as a songwriter through this process.  We were writing and recording almost every day for a few years with this team, but it was difficult to get song placements, etc., and our girl group ended up falling apart.  But I and the other lead singer in the group stayed on as writers to continue to create original material for other artists. I ended up doing a Kmart/Joe Boxer commercial with Timbaland that kind of launched my jingle career. I juggled singing jingles, doing voice-overs, and writing songs but got really antsy and craved being on stage performing again. I and my writing partner, Michelle, were writing a lot of upbeat dance songs and hooks and a lot of these tracks got remixed by amazing DJs in Europe which ended up charting on the World Dance Charts and Pop charts all across Europe.

I’m very much an old spirit so I love me some legendary artists like Whitney, of course, Tina Turner, Annie Lennox, Blondie, Aretha, Stevie Wonder, Prince, and others.

What inspired your latest single/music video “Ain’t I A Woman?”

My song is titled after the famous speech by Sojourner Truth called “Ain’t I A Woman.”  This speech has been inspirational to me since I learned it in High School. Having to learn it was a punishment given to me by my teacher but ended up being something I’ll never forget. My grandmother fully explained to me the Importance of Sojourner Truth and her speech. The power in this movement for Women’s rights has stuck with me for many years. Fighting through the limitations society sets for you as a woman can be challenging. It ultimately inspired me to create, motivate and celebrate myself and other women all over the world with this Women’s Empowerment Anthem!

I hope this song and music video inspires women to keep marching forward and fighting for what they want and believe, but also celebrate who they are, their achievements, and how far women have come today. Also, for the men to celebrate and appreciate the inspirational women in their lives.

Your children’s music project is called SNOOKNUK. What is the mission or goal of SNOOKNUK?

Snooknuk is my kid’s brand that I started when I became a new mom and began creating songs and media content to help families teach kids life lessons, social awareness, and mindfulness.

With Snooknuk, I aim to MOTIVATE, INSPIRE, & ENCOURAGE the little ones, going “Back to the BASICS” and making childhood magical again!  I am working on bigger projects such as an animated series with the same premise.

Music is my soul. Music is a part of everything I do. I make up songs for pretty much anything. I can’t stop so that’s the main reason. But If I can create something that touches or inspires others then it’s a Win-Win!

How are you handling the coronavirus lockdown?

It’s been tough of course but I’ve channeled all my frustration towards creativity. I’ve had more time than I’ve had in years so I’m trying new activities like meditation and yoga. I was always too busy to do those things. Doing TikToks with my daughters is fun and actually collaborating with more artists and writers at the moment.

Of all the venues you’ve played, which was your favorite and why?

I LOVED performing at THE FORGE Miami! I love Shareef Malnik (owner) and his family. He always made me feel like family. I was kind of a resident performer for a bit and knew almost everyone that came to hang out. Talk about a classic atmosphere, it had such an incredible vibe with its restaurant and lounge/club.  I had a lot of creative freedom when putting together my shows there and they were always well attended by celebrities of all sorts. AMAZING PLACE!

I’m working on new music and more music videos, not just in R&B and pop, but also some more dance/house music to keep us all dancing! I am in the process of also creating a musical as well that I’m excited about. I see myself being a musical director in the future so I’m gearing up!