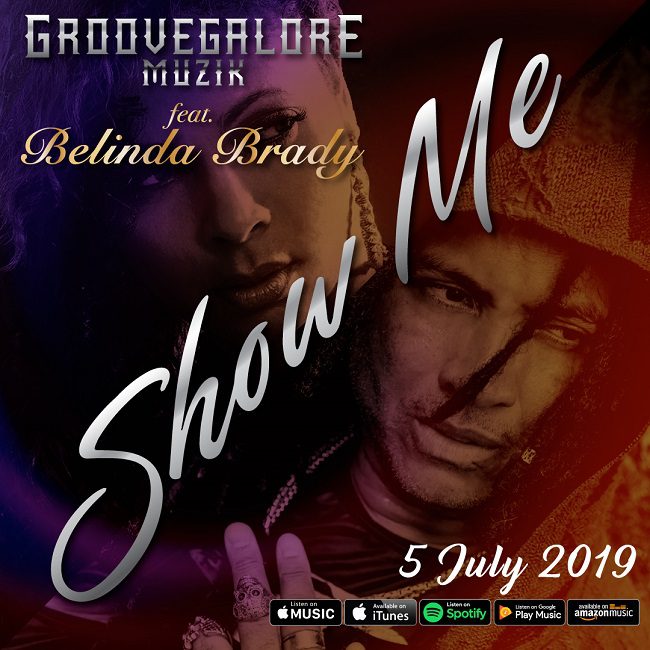 Belinda Brady, singer, songwriter, musician, producer, and entertainer has sung and performed across the world at festivals, TV shows and hotels as a resident singer & performer. She has been nominated for 2 Juno awards in Canada and won an urban music award for a best R&B single. Belinda Brady has worked with Grammy artist; Shaggy, OMI, and Grammy producers; Sly & Robbie.

How did you come by your stage names?

GrooveGalore (GG)– GrooveGalore has always been my desired choice for my production name since the year the Internet came about in 1998 and I had to choose my very first email addresses: GrooveGalore, which means Many or Plenty of Grooves or just plain, to have lots of it. So I always liked that name cause when playing live, I always pride myself on being a drummer/Producer who focused on Groove oriented Productions…

Belinda Brady (BB) – There really wasn’t anything to it. To be honest, I just decided to keep my full name and that’s how I branded myself as an artist. That’s how I am recognized.

GG – Since elementary school, I was always drawn to the drums and marching bands in my hometown of Montego Bay. Seeing bands live, I always focused mainly on the drummer, always. After getting into high school & joining the school band, everything changed & became clearer that this was what I had to do. I dropped everything else & focused solely on music performance & production a few years later.

BB – My father, Carl Brady was one of the founding members of famous soca band, Byron Lee and the Dragonaires. Seeing my parents performing on stage at a very young age and being totally mesmerized by them as entertainers, and how they captivated the audience; I was in awe. This inspired me to pursue music professionally.

GG – I’d say growing up I always liked Sly & Robbie & WILLIE STEWART OF THIRD WORLD among other greats from Jamaica including Desi Jones from Chalice & Desmond Gaynor of Sagittarius Band. They were the people whom I emulated drumming the most up until I saw my first MTV Rock Video with Van Halen’s Jump!

Then, my whole life changed and that brought me into a whole new world where I started to check out lots of rock and pop drummers who played on many records over the years, like John Robinson, Jeff Porcaro of Toto, Ricky Lawson, of Anita Baker…they at the time were all great influences for my Studio drumming style.

BB – Having Jamaican roots, reggae definitely inspired me, so artists like Bob Marley, Dennis Brown, and Marcia Griffiths were huge influences. Aside from reggae, I also grew up listening to Michael Jackson, Sade, Beatles, Lenny Kravitz, India Arie, Jonie Mitchell, and Alanis Morissette. From their music, songwriting and stage performances, I was greatly inspired by all these amazing artists.

GG – Well with the advent and change of the music business and the influx of Producer driven projects, eg. MAJOR LAZOR, CALVIN HARRIS, ZEDD, DAVID GUETTA, BOB SINCLAR to name a few, it made sense to move in this direction because I’ve always had my own music that I produced & needed another outlet to release them under, which wouldn’t fit in with my other Artiste/band projects that I’m involved with.

BB – The actual “Show Me” groove was a slower version. When Kastick of GrooveGalore sent it to me to write, like all of his other grooves, I loved it yet for years I was not able to finish writing it until a member of my writing team said it needed to be sped up. I felt like a burst of new energy and inspiration came. From there, the rest is history. Moving forward having a strong production & writing team is a no brainer.

GG – My greatest challenge most times is to choose which Engineer to Mix all the music I’m producing since that’s one of my weaknesses. I’m not personally a mix Engineer. So I’m always back & forth with mix Engineers trying to get the vision in my head right…

My greatest attribute with regards to work ethic is the vast & many genres of music & artists that I’ve worked with & tuned into over the years. So I bring all styles to the table when working on productions.

BB – I would say having the right team that works just as hard as I do and who stick around when times are tough. Of course, initially not being signed to a label that could provide the financial push had been a huge hurdle. Thanks to the Internet, I def don’t see that as a challenge anymore.

The discipline of learning how to leverage the Internet and become an artistpreneur and still be creative takes discipline and focus…my “work ethic” as an artist is a lifestyle. I think my mindset keeps me focussed to keep creating and pushing for this next project and others to come.

GG – THAT’S REALLY NOT FOR ME to say, I always leave the reactions to my playing to the opinions of the fans and I leave it at that always…

BB – For me, I am the best I have ever been in what I do. It’s all perspective really. There is no other GrooveGalore MuziK or Belinda Brady. So we are in my opinion the best and the worst based on how we perceive ourselves and perhaps how the fans perceive us too, especially the ones that have grown with us.

GG – I plan to just keep releasing great music and collaborations with all diff artistes & keep this going. The sky’s the limit definitely…

BB – Keep writing great songs and develop a powerful catalog to put together a new album. Keep building a fanbase from a grassroots level that can connect with my music on many levels who want to be apart of the journey. I would also love to get a publishing deal and have my tune placed in film and TV, commercials and or video games.

GG – Definitely BELINDA for realizing and making the commitment to us doing this finally, I’ve wanted to do this with her for years now & I’m completely hyped about this beginning and ready for the journey & future collaborations with her.

Evan Bausch for mixing this with me & dealing with all my editing ideas & suggestions for this project…Rissarera Designs for the badass Artwork for the single, big up…!

BB – Big Up KASTICK for never giving up on me even when I strayed musically. Big Up Dahlia Bateman; co-writer who inspired us with the writing to complete the project Finally, thank you to Steve Major from Moonraker Studio in Canada, who has really contributed to my sound as a vocalist and being apart of the engineering team for the Show Me project!

GG – Network like hell, learn other Instruments & software, Marketing and Branding is very important so U have to pay attention to that also like crazy, never stop listening to diff genres of music….