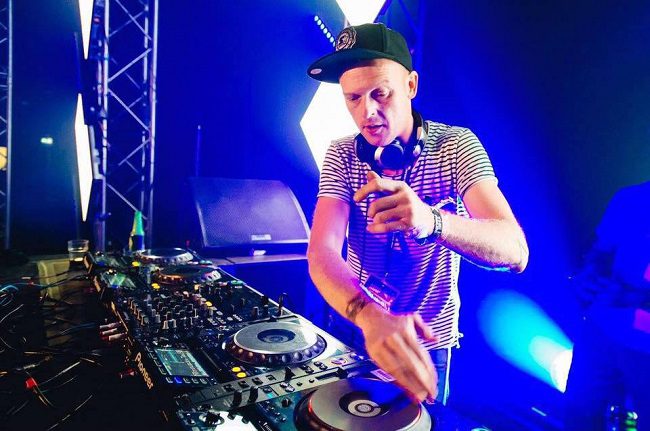 How did you come by your stage DJ name?​

The Jay Funk name came about from when after I dabbled in playing Hardcore ( Under the name DJ OHM !) when I first started aged 12/13 and went to my first House / US Garage event in 1993 aged 15.

I was ready to leave the sweaty, blokey events and mature a bit( I went to many events underage as I had a lot of older friends who would sneak me in!). My friends and I used to mix together and were fond of the DJ crew LuvDup and were gonna form a crew of DJ’s called FunkedUp, but at the time I was the only one really taking it seriously so I became Jay “Funked Up” Coldron. I eventually trimmed it down to Jay Funk and the rest is history!​

You have been in the ever-evolving UK underground scene for a long time when did you discover your love for your craft?

I had always loved music from a very early age , my father had friends from a nearby American air base and held BBQ’s at our house and would hear great Soul, Funk, and Disco that you wouldn’t necessarily hear on UK mainstream stations for quite some time so got hooked on hearing new and obscure music from like the age of 7 or 8 really .

My brother was also best friends with Digital, who would go onto being a member of  the Metalheadz and I would pinch rave tapes off him and become intrigued by what this mad electronic music was ( I originally thought the music was performed live on keyboards etc  ) But when I realized you could merge music together using turntables, I just had to be more than just a listener, I wanted to be part of the scene!​

We didn’t have a lot of money growing up , so I got a job working on a market stall aged around 13 (1991/1992) and saved up to buy my first turntables ( Which were a second-hand pair of HiFi decks, one didn’t even have pitch control and made slipmats out dusters that I cut around a 12″! And a Realistic disco mixer. I listened to copied tapes of sets from the likes of Carl Cox, Ratty, Slipmatt, etc and tried to emulate the mixes, practicing every hour I could to master mixing and just fell in love with cutting, scratching and getting that perfect mix together!​

So how did Rawkus Noise come about?​

The Rawkus Noise alias came about when I was traveling/ touring Australia in 2007 , after doing quite a few seasons in Ibiza where I had weekly residencies at Space , Eden , Es Paradis etc and guested around the island and Europe/ UK for quite a few years playing House after I had left the UK Garage scene behind after it got MC led and cheesy, I  started to play a heavier more Electro Bass type of sound around 2006, which was popular in Australia and didn’t want to blur the lines of what to expect from a Jay Funk set, so decided to come up with a new name to differentiate between my styles.

To what or whom are your musical influences?​

Early influences came from , D-Train , Shalamar , Grandmaster Flash , Sugarhill Gang, UB40 ( Mainly what was in my dads record collection)  etc . Then I got into NWA , Public Enemy but didn’t really like the aggressiveness then found Hip House in the late 80’s , Doug Lazy , Fast Eddie Rob Base, Young MC etc .

I then became obsessed with Hardcore, Carl Cox’s mixing skills and the likes of Slipmatt ( who I then became friends with years later! ) Dj Ratty and DJ SY. Once I’d matured a little, I was then obsessed by Todd Terry, Masters At Work, Eric Morillo, Todd Edwards, Tony Humpries, etc . Then I got into the evolving UK Garage scene around 94-95 and loved the vibes of Ramsey & Fen, Grant Nelson, Norris Da Boss Windross, MJ Cole, Hermit & Daniel Ward, etc​

Over the years I’ve respected and admired many producers and artists that just got me excited and their production styles just made me want to go out and mix or just jump into the studio and get a groove on. There’s so many out there that over the years influenced me and I like to incorporate all those influences in my DJ and production work.

With your current project being released on Pointblank Records ” The Chop Shop EP ” how did you come up with the theme & concept can you describe the style.​

Haha , well the concept came from a studio session back in 2011 with my friend BK ( Ben Keen , legendary hard house producer ) , He’d worked with the likes of Hermit and Daniel Ward back in the mid 90’s making early UK Garage stuff and I’d gone down to his studio to put together what we envisaged as Nu Skool Garage, sampling and chopping up old garage records in a sort of Todd Edwards style I suppose , bouncy , cut up style and came up with Cut & Shut .

We didn’t do anything with it at the time as it wasn’t really what people were digging, it was more Deep House then, so I shelved it until recently when I sent a load of unreleased tracks to Russell (Pointblank Records), he loved it and I went to work on getting an EP together of bouncy skipping 4/4 90’s style UK Garage . I’d always love the Pointblank label and have most of their releases on vinyl from back in the day, so is a real honor to be working on the label.​

What is your take on the emergence of the new Garage House scene & how do you see it progressing?

TBH, I bloody love it! The ’90s were such a special time and to me, my favorite period of music, so having a mid 90’s style genre re-emerging is right up my Strasse! ​

I hope to see it evolve with bigger productions using the skills and love that we heard in the early to mid 90’s US Garage scene rather than just reusing old sample packs etc, Don’t get me wrong, a good use of samples can sound fantastic but doesn’t beat the big sound of outboard and a great pro studio sound. I just hope it doesn’t get messed up with MC’s etc and cheesiness like what happened to UKG post-2000!

Have you any stand out memories from past events that you would be prepared to tell us about :)​

There’s many I remember but can’t say and plenty I don’t but get reminded of when I hook up with old pals from back in the day haha! Mainly from the Ibiza days, but I would definitely say my first time playing the Terrace of Space in Ibiza in 2003, it was every House Dj’s dream to play that terrace and I actually cried with joy behind my big sunglasses haha! ​

Many fond memories playing Garlands at Eden in Ibiza too, especially when I had loads of friends over from the UK and did the first three hours in the main room, then the last two in the classics room. One evening the main room had finished and the back room was just going off so much, I didn’t stop playing, even the staff and security were going mad to proper old school house classics, doing about 20 one more!

Then finally they made me play a final track and I was just so hyped and full of excitement, I just didn’t know what to play! My good friend Stuart was at the front and shouted “Voodoo Ray!” Knowing that is my fave track of all time, dropped it and the place went berserk !! Was such a perfect Ibiza moment! Then I drove 8 of us to an illegal “Rave in Cave ” in my old Mercedes 190E , My mate Kev in the boot , so funny and a perfect end to a mental 24hrs ( I’d performed 6 sets in different venues that night, crazy looking back ! but some of the best times of my life. )​

What suggestions do you have for other artists like yourself wishing to release their music?​

Everyone approaches production differently I suppose, even myself, no one track is made in the same way, I guess I’m still learning and finding my actual way of making certain genres, even after all these years. I love so many different styles of House and Garage, Bass and Acid, I make a track depending on how I’m feeling at the time and what piece of equipment or soft synth I have the urge to use and manipulate!

I would say to do your homework, take inspirations from your idols but don’t emulate them too much. Oh , and always take a break from a track and go back to it on fresh ears, try to get a few bits of outboard , they always sound bigger I feel , you can always get a chunkier sound and have more control with outboard, although there are some fantastic soft synths about these days for sure And get it to the right people, not in a bugging them type of way, just a nice intro message, and a playable link .

Don’t worry if they blank you, I get blanked all the while haha! Big labels and producers get so much mail, they miss a lot, just keep at it and network as much as you can, physically ( at events / after parties, etc ) & online. ​

Be passionate and DON’T GIVE UP!​

How and where can fans find you?​

You can find me on Facebook, my artist page DJ Jay Funk / Rawkus Noise, on Mixcloud, Instagram, etc. All my gigs and releases, she and mixes, etc can be found on those , I’m not overly active all the while and don’t have squillions of followers as I just like to do my thing, quality over quantity I guess maybe , I don’t like to over spam my followers but regularly upload old live recordings and mixes from the vaults as well as new recordings.

I also play on www.muusic.fmandwww.uniquesessionsradio.live  bi-weekly Tuesdays and Wednesdays plus gigs/ festivals all over the UK and beyond ( Dad duties restrict how many gigs I do these days, I used to play 4-5 gigs a week and still hold down a full-time job , but the scene has changed a lot over the years and not quite so many quality venues about so I gig a lot less these days and tbh my body can’t handle it as much as in the past haha!

Any Shouts or acknowledgments?

Big shouts to everyone keeping the vibe alive on the dancefloor and in the studio and to everyone who digs deep and buys and supports my music, I loves ya!