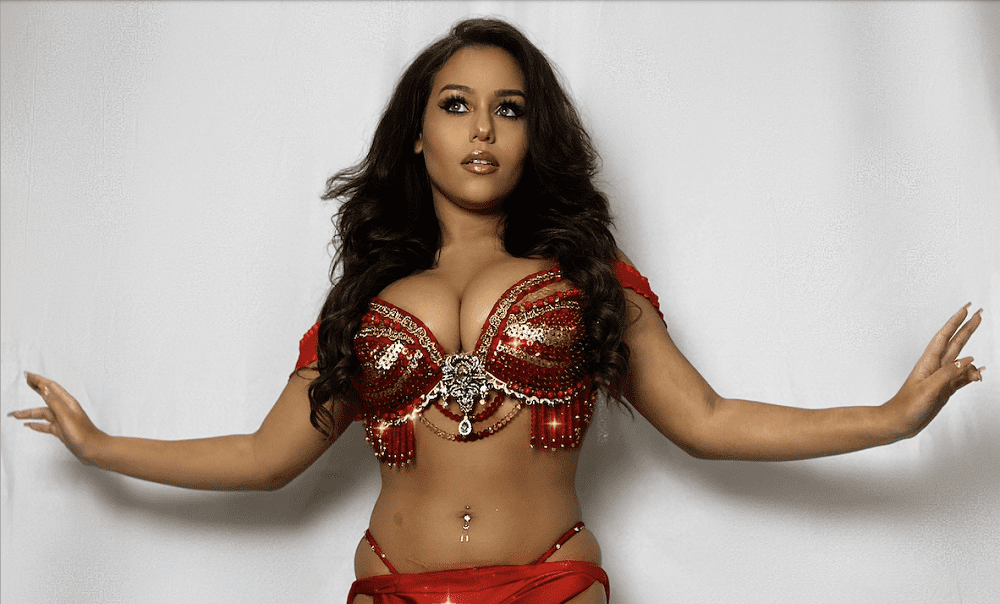 It’s Official! Gabby B, the global Brazilian Popstar in the making has just inked a new distribution deal with industry heavyweight Sony Orchard. Coupled with the news of this new partnership, an announcement of a new single release is here! “Belly Dancer!” The song and music video are set to be released on June 11th, 2021, and will be Gabby’s first project distributed through The Orchard. The Belly Dancer music video is a culture filled with influences from around the world including nods to Bollywood, Arabic, Latin, Fusion Belly Dance styles, and more.

The industry had begun to take interest in the multi-talented recording artist soon after her latest single “Merry Go Round” made waves with over 200 thousand streams and over 10 million social media impressions within weeks of its release. Both “Merry Go Round” and “Belly Dancer” were produced by the ever-versatile music producer Joseph “Mr. Hit Record” Lopez. Joseph is also the link between Gabby and her independent label imprint Muy Bueno and South Florida music industry veteran Jullian Boothe with Fast Life Entertainment.

Fast Life Entertainment is who helped facilitate the deal between Muy Bueno and Sony Orchard. Jullian and Fast Life will also play a future role in adding to marketing strategies and more. This situation proves to be a true “best of both worlds” scenario, offering Gabby B and Muy Bueno access to the important recourses provided by the likes of a Sony Orchard while maintaining their independence and creative freedoms.

You may know of Gabby B from her viral dance videos on social media such as TikTok and IG Reels where she loves to use her natural talents of Samba and powerful hip movements. Starting last March, Gabby B began garnering a massive social following when one of her videos “went viral” throughout the world and got huge attention in markets in the United States, India, and the Middle East.

This video alone has accrued nearly 40 million views and was the topic of Spectrum News last year as Gabby B spoke about the surging clip. Over the past year, Gabby has been able to top over 2.7 million followers on the TikTok app, as well as being verified on Instagram with 120k plus followers, and topping over 350k followers on the popular kids’ app “Likee.” With the fluidity of movement that Gabby uses with her hips, many have mistaken her as a professional Belly Dancer.

The creation of the song “Belly Dancer” was the perfect way for Gabby to express homage to the belly dancing culture that has become synonymous with Gabby’s brand, even though Gabby herself does not consider herself to be a professional Belly Dancer.

Although she may seem like a professional to some, Gabby B has never formally trained in the art of belly dancing. For that reason, to maintain authenticity, Gabby decided to hire two professional belly dancers: Ali Samadhi (Choreographer and casting) and Emily Iris for the music video to have them add their authentic dance moves and knowledge of the culture. The beautifully choreographed moves, coupled with amazing costume design (Including custom-made bras from Gabby’s own mother!) really help to bring the sonic vision of “Belly Dancer” to life! The video was shot and produced in South Florida by a popular company called Global Filmz.

While she may be fairly new to the music industry, Gabby B has no shortage of experience when it comes to the quality and quantity of content she has put out so far. With the arrival of “Belly Dancer,” it will be Gabby’s 14th song release and 12th music video in the span of just two years. After seeing everything she has put out to this day, there is the only reason to believe that her new single will be bigger and better than anything we have seen so far! If you don’t already, make sure you have all of Gabby B’s socials locked into your phone so you don’t miss any mind-blowing content that’s to come!

My stage name that I go by was simple to come up with. My name is Gabriela Bueno, and people call me Gabby, so we just shortened it to Gabby B!

I have always been in love with singing and performing since I was a little girl. Watching my mom and dad growing up really influenced me, as they are performers in their own rights. My mom is a samba dancer, and my dad is a martial arts master.

Once I moved to Florida and met my team, I was able to realize that singing was a real option for me. It was never in doubt that I wanted to entertain, but the question was how? So, I met my team and they provided me the opportunity to show the world what I could do, and the rest is history.

I credit my sense of style to my mom, dad, and Britney Spears. Specifically, I wear one glove in all my videos to represent my dad when he is doing Capoeira. I wear a lot of decorated bras as my main performing attire, which came from my mom when she used to do Samba and Axe. For the rest of my style, I can relate to Britney because of her edginess and sexiness.

For my upcoming single “Belly Dancer”, the concept really came from my fans. When I post dance videos, many of them think I actually am a belly dancer because of the way I move my hips and body. After hearing this over and over, and seeing that they love when I move in that style, it only made sense to create a song and video all about belly dancing. I’m super excited and ready to finally show my supporters what I’ve created!

One of my greatest challenges is maintaining my social presence on all the apps that I have. I love my supporters and I never want to go a day without providing them the best content that I can. It gets hard though when you’re dealing with so many different forms of social media, and you start to get busy with the music business and fall behind.

Another challenge is mentally keeping up with it all as well. I deal with ADHD and ADD so my mind is in a lot of places at once. Focusing isn’t always easy for me. I would say my greatest attribute is that I do anything I can to get the job done no matter what. Many times, I have physically suffered to get a music video scene right. I’ve done everything from filming in an ice-cold pool in the winter, to having sleepless nights to re-edit hours of footage. I have no choice because I want to succeed in what I do and put out the best content.

For me, I don’t like to compare myself to anyone. As artists, I believe that we are all on our own paths to success and we can all succeed together. I don’t like competing with people, and everyone is entitled to their own opinion, so I will let you all decide those answers. All I know is that I work as hard as anyone out there and I try to put out top-quality content every day.

In the near future, I hope to be releasing my first album. I have a lot of music lined up for you guys and I’m just waiting for the right time to share all of it! I also plan to be performing a lot more around the country.

I would like to thank my parents, my entire team, all the radio stations, and DJs who have been playing my music, and finally, my supporters who have been here with me since day one! Love you all, kissies!!

I can be found on YouTube (Gabby B Music), Instagram (@gabbyb_music), TikTok (@gabbyb_music), and all streaming platforms such as Spotify, Apple Music, etc. (Gabby B). My personal website is GabbyBMusic.com.

For other artists like myself, I suggest that you definitely listen to other people’s advice, but ultimately, trust yourself and your ideas. Early on, I was new in the industry, so I let others take control even though I didn’t always like the outcome.

Nowadays, I make sure things are done the way I like it, even if it comes off as a bit annoying. At the end of the day, you are the artist and it’s your image being put out there, not someone else’s. Always be you and do you!