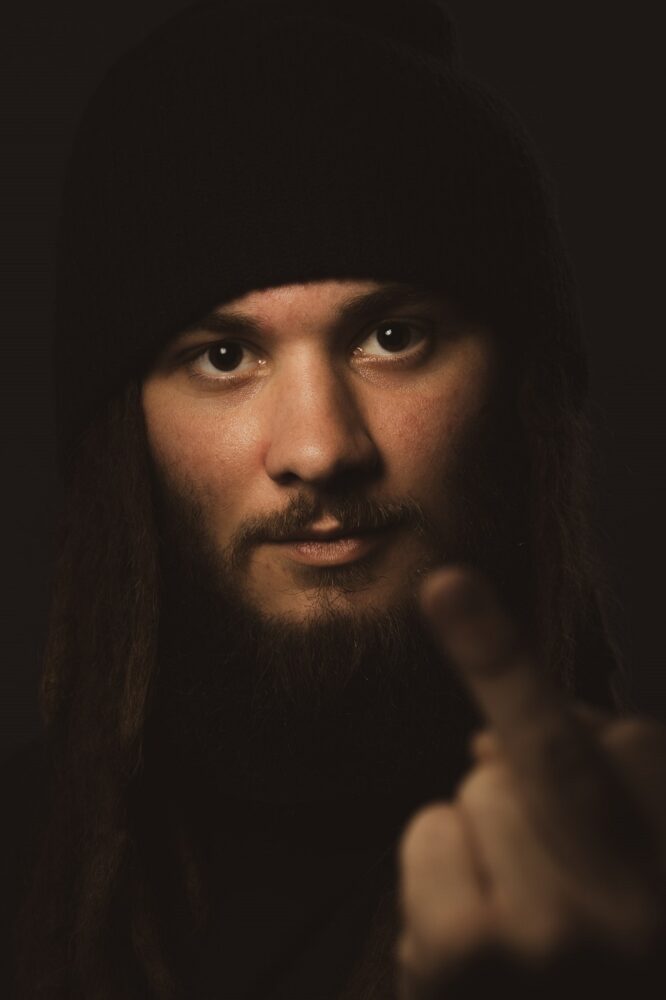 Free Mace came about when I was in high school and started as my Instagram handle in 10th grade. It later developed into my nickname and I went by that for years before the music was official. Free Mace has two sides to the name. One side is the freemasons and all the conspiracy/politics that come with that.

The other side of the name is that my name is Mason and I was going by Mace for a bit, so I just liked how it sounded because it had people coming to their own conclusions on the name. Was there free mace spray being given out? Was someone named Mace locked up and it was a plea to free Mace? Or do ya’ll think I’m saying free base in the microphone?

That last one happens more than you know. Either way, I like inciting people to think freely and open their mind to new perspectives that they wouldn’t have been exposed to previously.

I knew as a little kid I wanted to do music. It was elementary school I really was getting hooked. I went through different phases that have all contributed to the Free Mace sound. Both of my parents had full-time jobs so I would get home early and watch Metal Mania which used to be on VH1 Classic. I would watch that shit for hours and it was straight 80s hair band music videos, I fucking loved that.

It’d be something like Mötley Crüe to Great White to White Lion, and it was lit. My dad heavily influenced that taste because he put me on groups like KISS, Judas Priest, and Dokken as a kid. After that whole 80s phase, middle school and early high school it was nothing but Warped Tour style music. Hella screams pop-punk beats and guitar harmonies revolutionized things for me. The band that changed things up for me at the start was Avenged Sevenfold and their album City of Evil. The guitar harmonies were a whole new sound to me and they had a huge impact on me. Although I now prefer their first two albums a lot more, City of Evil was the first step into harder/faster music.

Then I got into bands I still listen to today like From First to Last, The Fall of Troy, Escape the Fate (Ronnie Radke only), that old school A Day To Remember, and so on. Around that time I was in this after-school music program called School of Rock and that really opened new opportunities like playing bass, doing screamo, playing drums, and eventually singing. All it took was a little taste of being on stage the first time and that is when I realized I had some sort of talent and I really enjoyed it.

That’s when I started recording music and playing all the instruments on the production as well. In 10th grade, I started surfing super heavy and my homie at the time showed me Pepper, The Expendables, Sublime, and all those sorts of bands. We had a gig getting paid under the table to do paddleboard lessons at a surf shop early at like 7 am on Saturdays. Every Saturday, we’d drive down hungover from Friday and jam Sublime’s Robbin’ the Hood or Pepper’s Kona Town.

Fast forward a couple of years and I started listening to Steel Pulse, Black Uhuru, Dennis Brown, and a group called Chon that I was on super heavy. Add some Dance Gavin Dance every day and that sums it up. I really started taking music seriously when I was getting my degree in music production. Being supplied all this knowledge I knew I could do my own thing,

I would say the main groups we draw our sound from would be Bradley Nowell era Sublime, Less Than Jake, Bad Brains, early Iron Maiden, and all the other bands I listed above. A lot of the influence comes from my experience in life and whatever emotion I’m feeling at the moment and that’s imprinted in all of our recordings. If you’re at a show, you’re right there with us and equal with us. I really dig getting off stage and drinking a beer with everyone and learning their story.

I got the concept for Media after the turmoil the world’s been in for the past year and a half. The suppression of free thought, the subjugation of communities, the assimilation of the flock/sheep mentality, and the overall corruption and disarray coming from entities we should be able to trust. The facades that we don’t ask questions about.

The greatest challenge I would say is that I do a majority of the stuff myself. Media was the first album that there was someone else playing an instrument for all the tracks. I was so lucky to have Freddy from a group called For Peace play the kit because the drums are such a prominent sound on the album. Everything else I’ve been recording and mixing myself, so you hear it exactly how we want you to.

On the contrary, my greatest attribute towards work ethic would be that I do a majority of the stuff myself. I don’t have to wait on anyone and everything has been on my time so it really pushes me to be proactive. Even if I’m not working on Free Mace stuff I work on other music like Lofi HipHop under the guise F2MS or collaborate with local Jacksonville artists on their stuff.

I wouldn’t say that I’m the best at what I do at all. There are people that do it better and worse. I just want to stand out and not be a statistic. Between my friend group of artists and musicians, I’m the tech dude they hit up if things need to be wired properly for sound or if their software is bonking out. I know I’m never going to be the best, but I enjoy the ride and everyone that is there along the way.

For the near future, I’m planning on kicking it and exploring new creative outlets and opportunities. Keep evolving the Free Mace sound and discover new sounds while I’m at it. I’m planning a Puerto Rico surf trip for the first week of November too so I’m super stoked on that. I also want to help other artists to get their sound where they want it and produce more people.

Shout out to all my family, shout out to the universe, my dudes King Shock and Rock Zilla with the Vibe Tribe, KP and Don Lito, and all the fans that support our music and come out to our shows.

People can find Free Mace on Google, Spotify, Apple Music/iTunes, and all the other platforms.

For aspiring artists and entrepreneurs, I would say go for it. It’s better to give your all to something than giving half to nothing. The only thing stopping you is you.